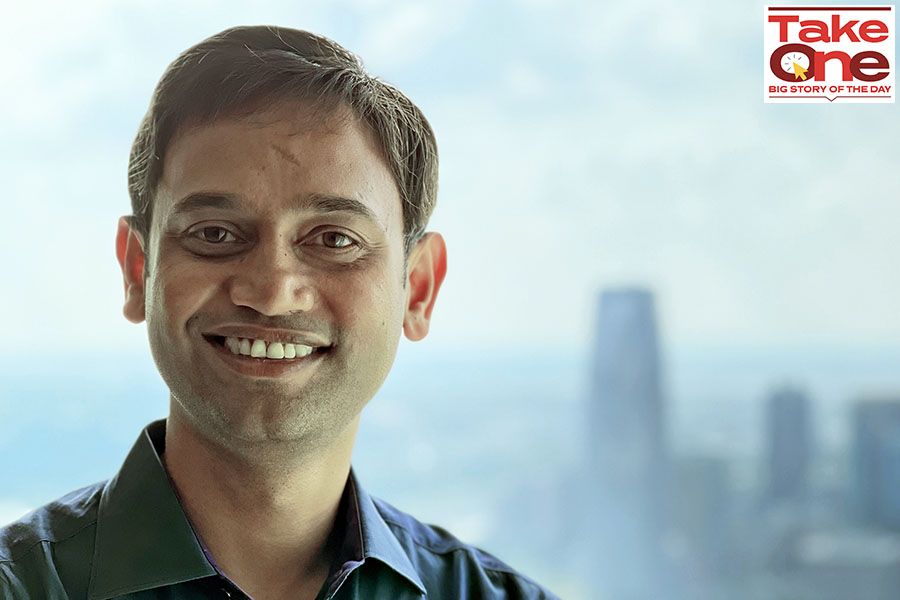 Quite early in his life, Raghu Yarlagadda had ample clarity on what he wanted to do. “I wanted to build products which had immense value, had massive impact and could make a dent in the universe,” says co-founder and chief executive officer of FalconX, one of the largest and fastest growing digital asset brokerages based out of the US, with offices across Silicon Valley, Chicago (US), Malta and Bengaluru (India). In June, FalconX more than doubled its valuation to $8 billion when it raised $150 million in Series D of funding led by GIC and B Capital. While the round saw participation from existing investors such as Thoma Bravo, Wellington Management, Adams Street Partners and Tiger Global Management, FalconX already had a long list of marquee backers such as Accel, Altimeter Capital and American Express Ventures.

For a startup founded in 2018, the CEO of crypto brokerage and digital asset trading platform for institutional investors has indeed managed to achieve three things that he wished for in his school and college days. First is the value. Yarlagadda’s four-year-old digital assets trading platform, for sure, is valuable to VCs. Valuation of FalconX has pole-vaulted from $3.75 billion last August to a staggering $8 billion now.

Second comes impact. Raising over $430 million from the world’s leading investors, FalconX has emerged as one of the fastest and most valuable crypto prime brokerages in the world. Its crypto-as-a-service offering powers global banks, fintech institutions and investment applications to easily add crypto to their product offerings. The goal is to enable the next billion users to enter the crypto space. Well, that’s some kind of impact.

And last, the ‘dent in the universe’ bit. Yarlagadda has managed to do so to a large extent. “When I realised that most of the world's value is going to be tokenised, I wanted to build a company that is at the front and centre of this transformation,” he says, explaining the trigger to start FalconX in 2018. Four years later, from world’s largest hedge funds to fintech companies, everybody is busy focusing on digital asset transformation. “Irrespective of where we are based, I wanted to build a global product that caters towards the tokenization megatrend,” he reckons. “I had this clarity.”

Meanwhile, back in Vijayawada, Andhra Pradesh, where Yarlagadda was born and brought up, there was another clarity for the young lad quite early in his life. He was told what he must not do. “My dad, a doctor, gave me remarkable clarity that I shouldn’t be a doctor,” smiles Yarlagadda. Reason? “My father noticed that I didn’t have patience,” he says. His father’s prognosis was followed by medical advice. During his higher school days, Yarlagadda was intensely passionate about badminton and engineering, in that order.
In one of the badminton practice sessions, the young lad tore his anterior cruciate ligament, went to the best orthopaedic surgeon in the city, and made a passionate plea. “Please fix it. I am really excited about badminton and I don’t want my performance to be affected,” he said to the doctor. 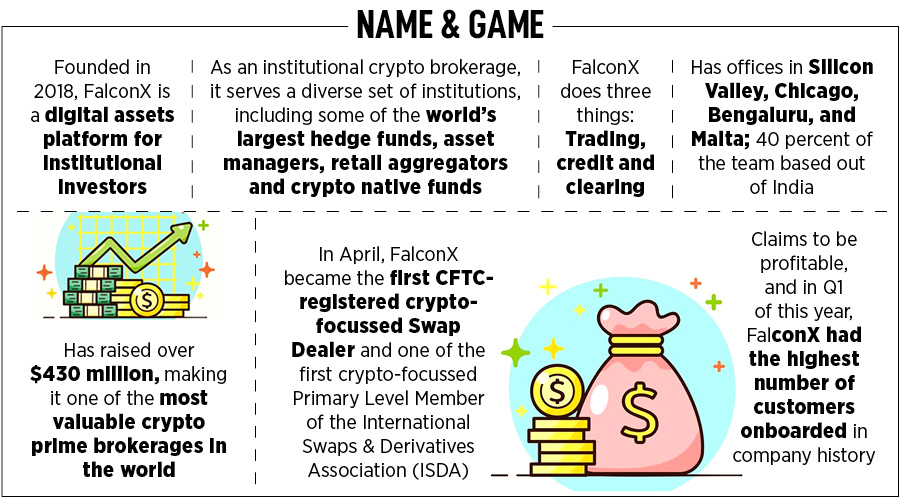 What happened next was nothing less than dramatic. “I was looking for medical advice, and he gave me career advice,” laughs Yarlagadda. “Why badminton? You must do engineering,” said the doctor who used the damaged ligament as an excuse to paint a not-so-rosy picture of badminton as a career. “That’s how I got nudged into my second passion, and I became an engineer,” says Yarlagadda, who did his engineering from Vellore Institute of Technology, and went on to complete his masters in electrical engineering from the University of Texas. “For me, engineering is a tool to ultimately create value,” he says.

Also read: Crypto will not be hit as hard as other startup sectors: Sumit Gupta

Back in 2008, Yarlagadda started his career with Motorola. “I was interested in television and video,” he says. During those years, he lets on, Motorola was one of the best globally in video image processing. He worked in a team that pioneered high-definition video transmission. “Internet was never designed for video transmission,” he says, adding that his little-over-four-year stint laid the tech foundation for video streaming services such as Netflix and YouTube. As an engineer, Yarlagadda had the technical layer crucial for making an impact and dent in the world. But an equally crucial missing link was business layer.

Then came another career advice. This time it was from colleagues. ‘Engineers must go to business school, or else the world doesn’t take them seriously’, was the counsel. “It was a terrible advice, but I fell for it,” confesses Yarlagadda, who went on to complete his MBA from Harvard Business School in 2014. “This place changed my perspective,” reckons the engineer who realised the value and dent in universe can only be created if the products have a global appeal. The place of operation was immaterial. What mattered most was product or service for global market. “Harvard made me ask this question to myself: How big can I think,” he says.

Yarlagadda was ready to take a plunge into entrepreneurship. But again, destiny, wanted him to take more lessons in patience. He got a job offer from Google, and he couldn’t resist. Reason was simple: The magnetic pull of Sundar Pichai, who did his master’s from Stanford and MBA from Wharton School. “I wasn't very serious about the job at Google. But I didn't want to miss a chance to meet with Sundar,” says Yarlagadda, who joined Pichai’s Chrome OS team in July 2014. “We launched Chromebooks in the schools in US,” he says. The magic that Yarlagadda was looking for—what happens when the technical layer merges with the business layer—was happening in front of his eyes. Chromebooks became a huge sensation. In less than three years, he points out, the business went from $10 million to over $2.5 billion for Google and its partners. “I saw scale for the first time and this gave me lot of confidence,” he says.

Interestingly, success at Google also made Yarlagadda ‘fat’. “Google treats you really well when your products are doing well,” he laughs. The ‘fat’ boy realised that he had slipped into the comfort zone. “The itch to do something of my own started again,” he says. Talking to a bunch of bright minds at Google made him see what he thought was not that exciting. “I wasn't really excited about blockchain then,” he says. Little did he realise that his calling and mission—value, impact and dent—already had a cryptic beginning at Google. The tipping point came when he realised that most of the world's value is going to be tokenised over the next few years. 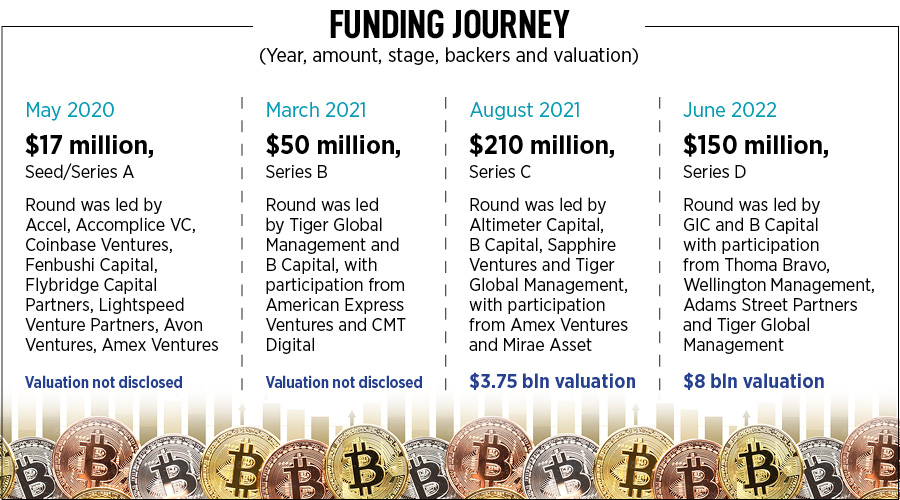 The outcome was FalconX, an institutional crypto brokerage for institutional investors. Yarlagadda explains FalconX by using an Indian example. A Bombay Stock Exchange (BSE), he underlines, is an exchange where people are buying and selling. Zerodha, on other hand, is a brokerage that sits on top of different exchanges. FalconX, he points out, serves a diverse set of institutions, including some of the world's largest hedge funds, asset managers, retail aggregators and crypto native funds. “We do three things as a brokerage: Trading, credit and clearing,” he says. In the US, a lot of institutions traditionally went to exchanges but now are migrating quickly to the brokerage side of things. “As the market matures, the brokerage boom comes in,” he says, adding that India is still nascent on the institutional side of crypto business.

India, though, plays a major role for FalconX. Of the 160-strong staff globally, about 40 percent is based in India. But that's going to change over the next two years. “About 60-65 percent will be from India,” says Yarlagadda, adding that he never looked upon India as a satellite office. “India is almost like the giant headquarters,” he says. In terms of footprint, core engineering, operations and strategic thinking, the US and India offices are equally split. Whenever there is more clarity on the regulatory front, FalconX will launch operations for institutions in India, he adds.

Is crypto the future? Yarlagadda stays candid. “I'm not the one who believes that everything is absolutely great and rosy with crypto,” he says, adding that there is some froth. Like with any early technology, the froth needs to be corrected and cleaned up from the system. “In fact, we are going through that cycle of correction right now,” he says. India, he underlines, is best placed to drive crypto revolution. A combination of big English-speaking population, a large democracy which is conducive for digital assets, and voracious appetite for financial inclusion gives the country a headstart in digital assets revolution. These forces of intersecting vectors give a tremendous opportunity to make something as profound as what India did with outsourcing 15 or 20 years back. “India can truly build global crypto systems. And I hope we use that opportunity,” he signs off.

Tweets by @forbesindia
Photo of the day: Another round
We see the growing smartphone market as a big opportunity: Manabu Yamazaki of Canon India