The Indian arm of German wholesale retailer is betting big on its kirana play to widen its reach. Can Metro Cash & Carry aggressively pursue its bullish intent? 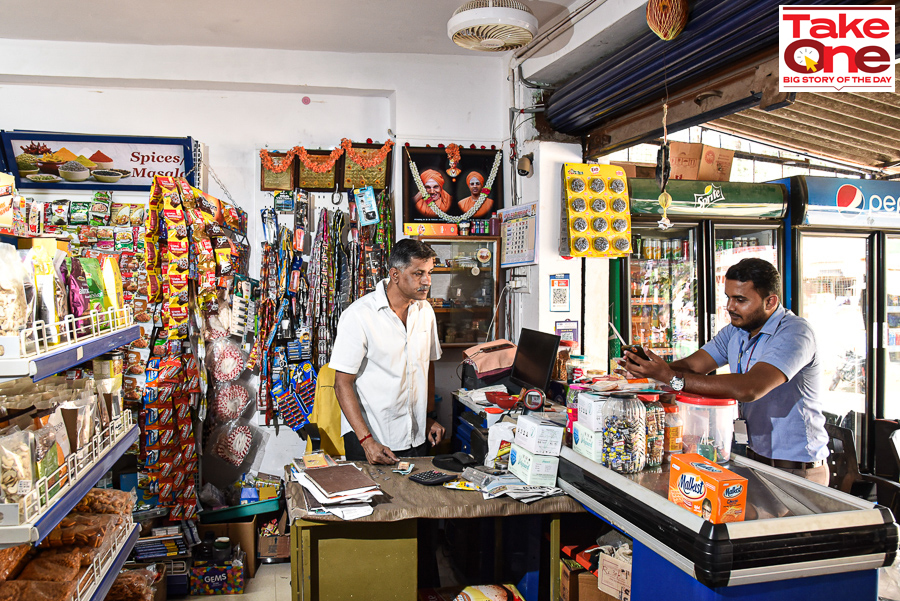 Dayananda Murthy (left) has a weekly meeting with Metro Cash & Carry Smart Kirana executive Murali at his supermarket in Bandepalya, Tumkur, Karnataka. Murthy's Sri Basaveshwara supermarket was a general store for 20 years, until he converted it to a Smart Kirana with Metro. Image by Hemant Mishra for Forbes India
Yeshwanthpur, Bengaluru. It was a baffling, yet a valid question. “Why should kiranas come to buy from you when we have such a great distribution network,” asked the chief executive officer of one of the top FMCG companies in India to his counterpart in Metro Cash & Carry India. “These guys (kirana owners) are effectively served by us. Aren’t they?” he smirked and looked inquisitively.

Arvind Mediratta, who was at the receiving end of the probing queries, smiled. The managing director and chief executive officer of Metro Cash & Carry India pointed towards one of the kirana owners who had overloaded his shopping trolley. “He doesn’t need to bother about bulk orders. The goods will get delivered within 24 hours,” he added. 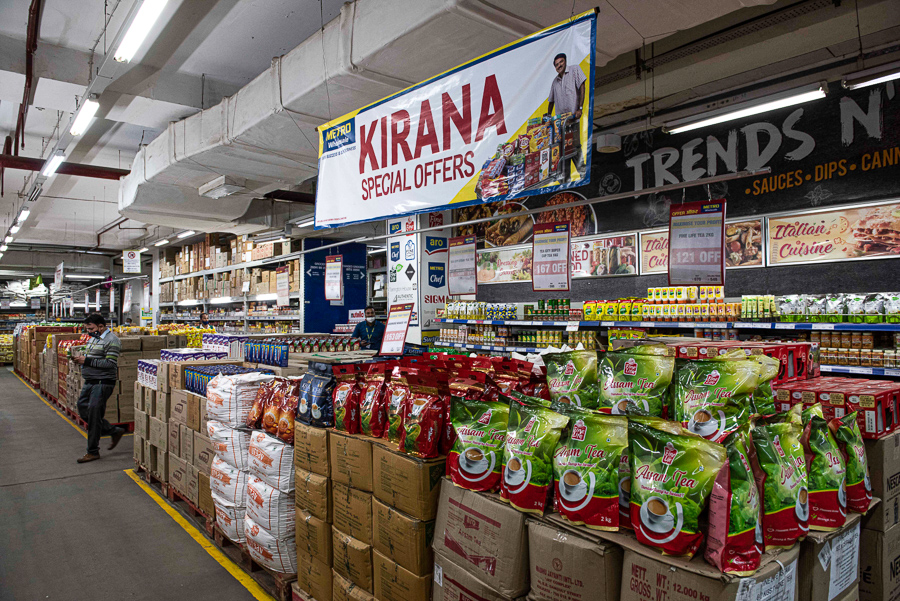 A year later, in Shahdara, Delhi, it was Manoj Narang’s turn to face some critical questions. “Narang sahab, why don’t you stock some frozen snacks, and ready-to-cook products,” the store manager politely asked the 50-year-old kirana owner who had his shop in Delshad Garden, some 15 minutes from Metro’s first outlet in Delhi which was rolled out in 2012. The manager spent a good thirty minutes talking to the second-generation entrepreneur, figuring out his pain points and bottlenecks hampering growth in revenue.

Fast forward to Zirakpur, some 40 minutes from Chandigarh. Manohar Chaddha was struggling to find the right answers. “If you are selling baby diapers, then why aren’t you able to sell milk powder and other baby care products,” asked one of the customer care executives of the Metro store. On his daily visit to the mom-and-pop stores to take orders, the executive tried to reason with kirana owner Chaddha who had been reluctant to give his decade-old-shop a much-needed makeover. 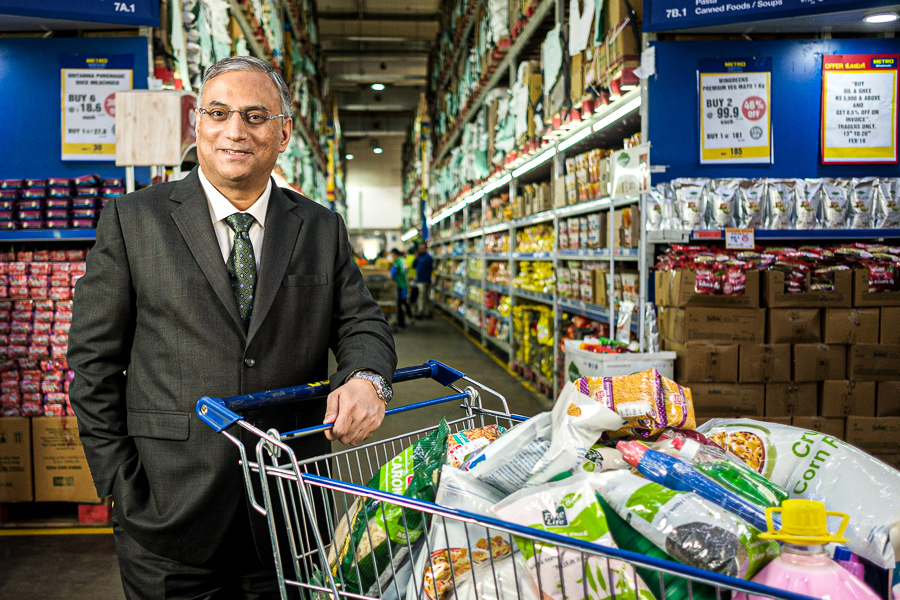 Arvind Mediratta, Managing Director and CEO of Metro Cash and Carry flagship store in Yeshwantpur, Bengaluru. Image by Nishant Ratnakar for Forbes India
The reason obviously was money. Remodelling and modernising Chaddha’s 400 sq ft store to a ‘smart kirana’ would have entailed an investment of around Rs 2.5 lakh. “Don’t worry, we will reimburse your investment via bonus on your monthly purchase from Metro,” was the reassurance from the feet-on-street executive, who happens to be one of the 1,000 sales guys fanning across the country to meet, understand and take orders from kiranas of all shapes and sizes. 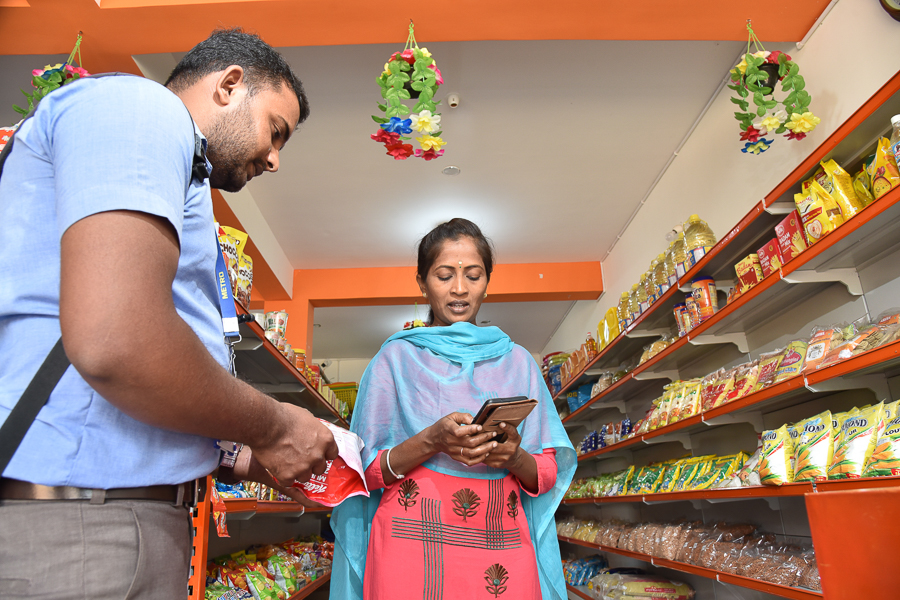 Yashoda checks new orders on the Metro Cash & Carry app at Sri Lakshmi Venkateshwara supermarket, the month-old store she owns and runs in Hegeere, Tumkur, Karnataka. Yashoda was employed for 15 years before she started on her own. Image by Hemant Mishra for Forbes India

Meanwhile, at a store in Tumkur, Karnataka, Metro’s first entry into a small town with a population of 3.5 lakh since its debut in India in 2003, Priyam Sheth is looking for answers which have eluded him for years. Around 70 km from Bengaluru, Sheth’s kirana store in Tumkur has always grappled with excess inventory ‘dumped’ by FMCG executives of big and local brands. “I never had a choice. I never had the space to stock all,” he rued. The answer came in the form of a question. “But why do you need so much of inventory,” asked the executive of the Metro store which opened shop in Tumkur in 2020. “You can download the app and order it daily, or whenever you want,” he said. 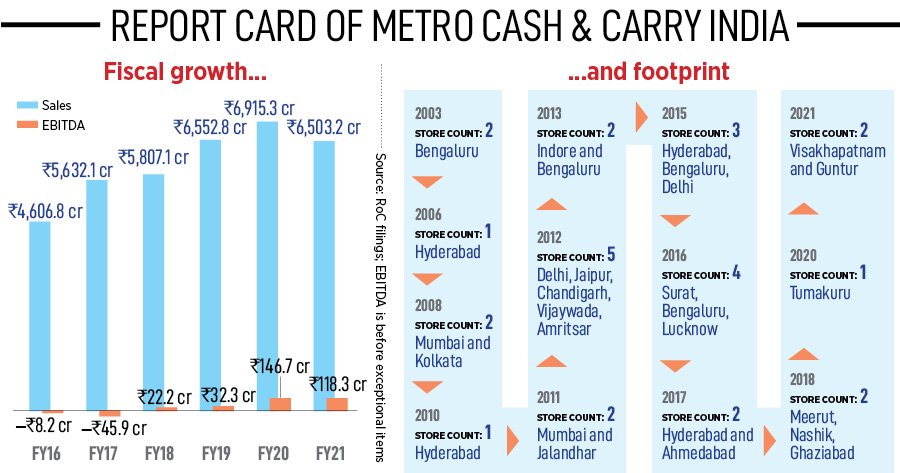 For the 35-year-old shopkeeper, the results have been dramatic. Stock management, Sheth avers, is now efficient. “There is tremendous time and cost saving, faster fulfilment, and doorstep delivery service,” he adds. The benefits are, in fact, mutual. Metro, which usually has 50,000-70,000 sq ft stores, is now going into smaller towns with a smaller size—35,000 sq ft. Last year, it opened one in Guntur in Andhra Pradesh, some five-and-a-half-hour ride from Hyderabad. Now it plans to get into Hubli, in Karnataka, about 412 km from Bengaluru, and other smaller places.

Metro’s small play is loaded with bigger impact. From digitising, remodelling and modernising kiranas to helping them with efficient utilisation of inventory, planogram, data analytics, easy credit and targeted promotions, the wholesale B2B retailer has been aggressively reaching out to thousands of kiranas across the country to deepen and widen its omni-channel play—app, feet-on-street and store footfall—in the country. 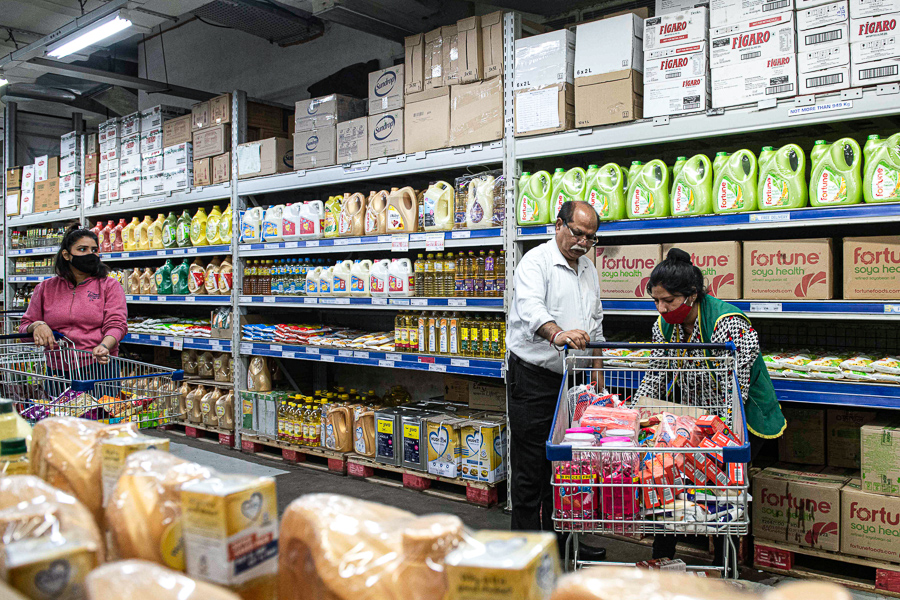 Manoj Narang, a retail grocery shop owner from Shalimar Bagh gets help with picking supplies for his shop at the Metro Cash & Carry outlet in Shahdara, New Delhi. Metro Cash & Carry's new Smart Krana format provides support and good deals on products to retailers. Image by Amit Verma
In fact, the only profitable entity in its segment, Metro has pulled out all stops to add heft and speed to its kirana juggernaut, which rolled out in the form of the ‘smart kirana’ programme in 2018. “We are the McKinseys and the Bains for kiranas,” asserts Mediratta, who joined Metro in February 2016. Metro, he underlines, is helping kiranas transform by digitalising, remodelling and modernising their operations. “Our purpose is to be the champion for small independent business,” he adds. 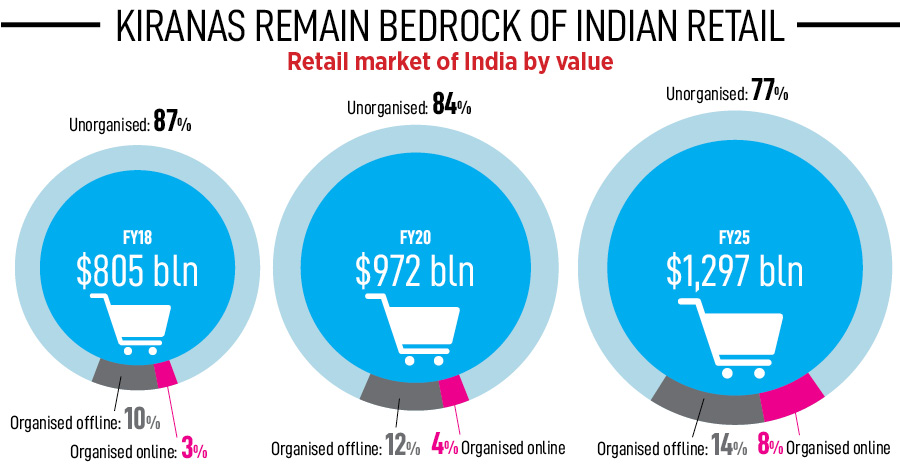 Interestingly, for Metro Cash & Carry, which came to India in 2003, kirana awakening happened quite late. The reasons are not hard to find. Mediratta explains. “When I joined the company, we were focusing on multiple segments,” he recalls. For a company, which had three broad customer buckets—traders, HORECA (hotels, restaurants and cafes) and companies and offices—it was not clear what Metro stood for. Once the global mission statement was clear—championing the cause of small independent businesses—it became easy for Mediratta to focus on kiranas who are competing to stay relevant amidst the onslaught from modern retail and e-commerce players. “The most lucrative and the most attractive segment is kiranas,” he underlines. 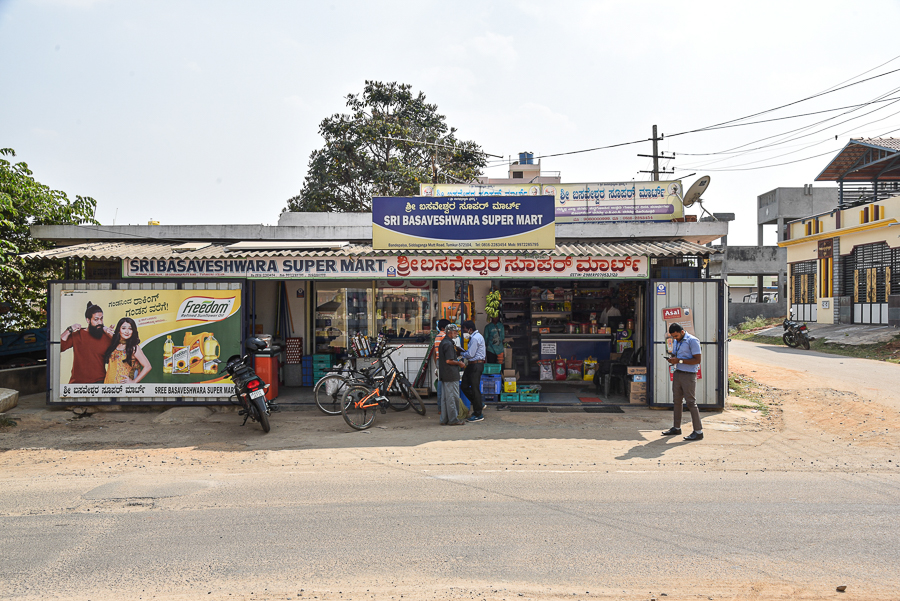 A street view of Sri Basaveshwara supermarket at Bandepalya, Tumkur, Karnataka. After 20 years of running a general store, owner Dayananda Murthy converted it to a Smart Kirana. Image by Hemant Mishra for Forbes India
Experts are not surprised. An estimated 13 million kiranas in India do present a massive untapped opportunity as most of them look to upgrade and get a modern makeover. Look at the numbers. While there are 1.7 million kiranas in metros, the equivalent numbers for Tier I stands at 1.2 million and a staggering 10 million when one ventures into Tier II and beyond. The resilience of kiranas during the pandemic have conveyed the message to the owners to modernise and digitise their operations.

For suitors like Metro, who are aggressively wooing kiranas with unique and customised services, offers and products, the future prospects are promising. By 2025, according to estimates by consulting firm Redseer, the Indian retail market will increase to $1,297 billion in value, of which organised online play would be just 8 percent. While 14 percent would remain with organised offline players, a staggering 77 percent would still be unorganised.

Contrary to popular perception, Mediratta underlines, kiranas are growing. “They were growing in 2016, they grew last year and will continue to do so,” he says, adding that, during the pandemic, sales for kiranas went up. Metro Cash & Carry, he stresses, just tried to be empathetic towards the needs of the kirana owners who had been grappling with issues on the supply and demand side. What was missing was transparent pricing, better assortment, catering to the emerging needs of the customers, and data analytics. Metro, he lets on, plugged the gap. “You can no longer be a fuddy-duddy store owner,” he says. “We are converting 1-2 kiranas to smart kiranas every day,” he claims.

The question to ask now is can Metro outsmart a bunch of heavily-loaded rivals like Reliance, Walmart and Amazon? Experts reckon the challenge is daunting. “It is becoming a crowded space,” says Nimesh Kampani, co-founder and CEO of Trica, a platform for family offices and UHNIs to invest in startups. Amazon’s Kirana Now, Tata-BigBasket combine, and Reliance JioMart are hyper aggressive to expand their reach among kiranas. “Not to forget online grocery players like Blinkit, and even delivery-platforms like Swiggy and Dunzo have a fair share in metros,” he adds. 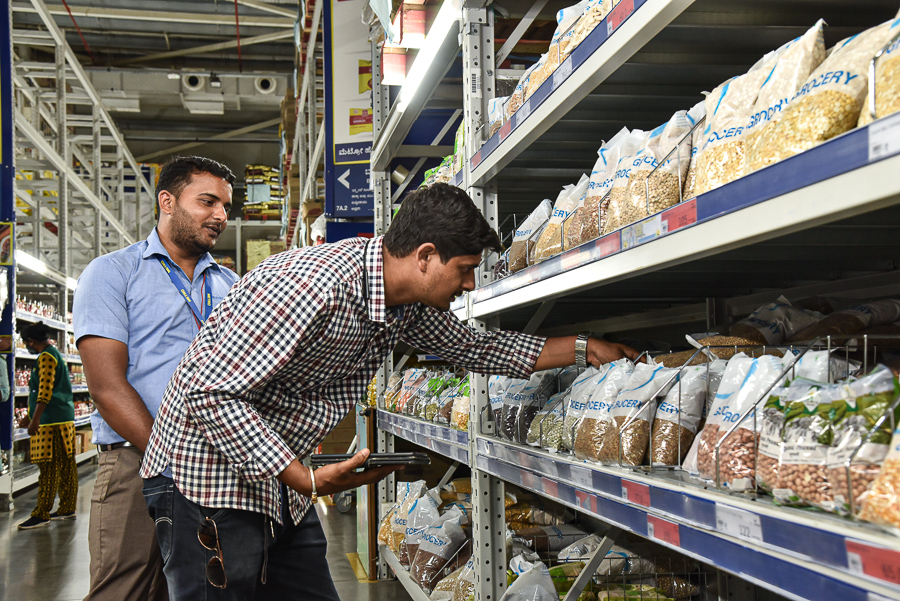 Manohar is a partner who owns Farmer food mart at Sira gate, Tumkur. He is seen here getting assistance from a Smart Kirana executive at a Metro Cash & Carry outlet in Tumkur. Image by Hemant Mishra for Forbes India
The other big challenge for Metro could be the speed, or lack of speed, at which it has been expanding. For a company that started operations in 2003, just 30 stores to talk about in eighteen years is not a great run rate. Mediratta, though, insists on growing sustainably. “We've been running a profitable business,” he says. “Sales is vanity, profit is sanity and cash is reality,” he adds. 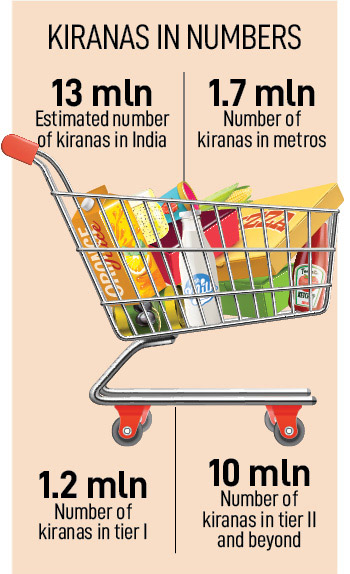 But is slow speed hurting Metro? There were recent reports that the Indian business was under review. The global spokesperson, though, rubbished such reports. "At Metro, we regularly assess our international portfolio. India is an important part of our portfolio,” said the executive in an email. “The Indian subsidiary is growing and is profitable. We are bullish on our India business and continue to expand,” he added.

Mediratta, for his part, points out a potential challenge for Metro. “We are seeing irrational behaviour from rivals,” he says, alluding to heavily-funded startups. “They are not worried about bottom line,” he says, alleging that some of the competitors are selling below cost price. “At times, the kirana guys fall for such tactics,” he points out. Conceding stiff competition, Mediratta is optimistic about his profitable and sustainable play. Businesses, he underlines, have to be valued not only on the basis of top line but also bottom line and cash flow. Metro, he underlines, will stay committed to its motto. “Our purpose is to be the champion for small independent business,” he signs off.

Tweets by @forbesindia
Photo Of The Day: Refugee crisis
Storyboard18 - To Her, With Love: HUL's Priya Nair on how her mother inspired her to go back to school