Bhavna Suresh and her 10club gang is playing a differentiated ecommerce roll-up game, which is not tied to recurring fund raise and the valuation flywheel. Can the 'lean and mean' strategy pay off? 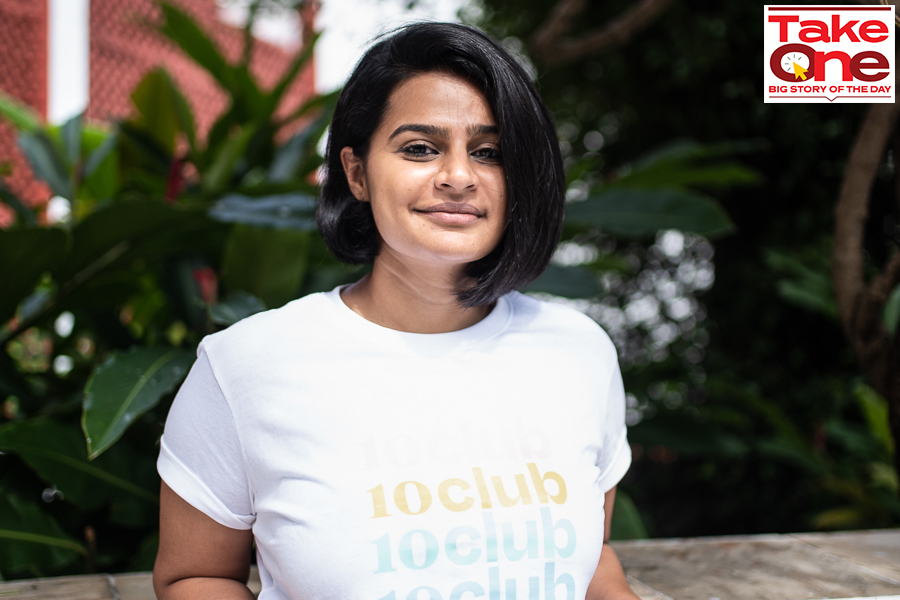 Bhavna Suresh, cofounder and CEO of 10club
If you are in the business of acquisitions—which all ecommerce roll-up players inherently are—then these are the two golden rules that you must never forget. First, always mind, and master, your own business. Second, know the flip side of funding, acquisitions and valuations. Bhavna Suresh, who is into her third stint as an entrepreneur, knows both by heart. The thing with valuation, reckons the co-founder of 10club, is that the minute you get it very quickly, you have to start burning money to keep up with the growth. “This makes the business model a little tricky,” she maintains.

Started by Bhavna, Joel Ayala and Deepak Nair in October 2020, 10club is an ecommerce roll-up startup that raised a hefty $40 million in seed round last June. Though it turned out to be India’s largest seed round, the funding dwarfed in comparison to what its rivals notched up. Take, for instance, Mensa Brands. Started last May, the Thrasio-style startup raised $135 million in November and raced into the $1-billion club in just six months, making it the fastest unicorn of India.

Then there is GlobalBees. Started in May last year, the roll-up player raised $150 million in Series A in July, and got $111.5 million in Series B funding four months later, and turned unicorn. Both the formidable rivals managed to grab more money, valuation and eyeballs in a short span.

Bhavna, though, is unflustered. Though in the same game, she is playing by her own set of rules. “We are not that company which makes funding announcements every two to three months,” she underlines. The ‘lull’—if one may call it—after the seed round makes sense. What a lot of people don't understand, she explains, is that when you buy a business that has cash flows, and is profitable, you are reinvesting that into the venture. The moment one starts taking more money from the outside, the entire model gets out of shape. “The beauty of the model is if you burn money, you're taking away the attraction of the model,” she adds.

Though 10club is modelled on Thrasio—just like other Indian rivals in the roll-up space—the similarity ends there. Bhavna points out two critical differentiators. First, 10club buys only profitable companies. The idea, she stresses, is to grow them multifold—or 10x—but in a sustainable manner, ensuring cash flow. “It's a great business model,” she maintains. These companies have already grown from zero to one stage. “Now, our job is to help them grow from one to 10,” she adds.

The second odd strategy is to build a bunch play—buying companies in a similar space and bunching them up—in a focussed and sedate manner. So far, 10club has bought eight brands across three categories—sports, home and baby care. And Bhavna is in no mood to play the valuation game. “My intention is not to build something quickly. I am here to build something large,” she says. “The big thing for us is opportunity.”

Vinay Singh, partner at Fireside Ventures, explains the big opportunity. As the digitisation juggernaut rolls at an aggressive pace—both horizontally and vertically across India—it would result in a big chunk of consumers discovering and shopping for brands online. Though the digital consumption in future would straddle a lot of categories, now it’s confined to a small percentage of population. Singh lists out the four quartiles of digital consumption in order to point out where the big untapped opportunity lies.

In the first bucket are top established brands such as L'Oreal, Puma and Nike. The second includes venture capital (VC)-funded brands such as boAt or Mamaearth. “These are thriving brands,” says Singh. The third bucket, he underlines, includes categories where digital consumption is already happening and is likely to gather steam. However, as standalone categories—home, kitchen, garden, mosquito nets, ladder—they don’t meet the ‘venture return’ expectation of the VCs because of their small size. “Such categories are not mainstream but offer consumption opportunity,” he says, adding that the last bucket includes discretionary items.

For ecommerce roll-up players, the ‘pot of gold’ is the third bucket. “If you club a bunch of these categories, then suddenly the dynamics change,” says Singh. The market opportunity gets magnified, the synergy play comes into full force, and the prospects of scaling individual brands brighten up. Now brands start getting critical mass, heft and organised capital to grow at a rapid pace.

10club’s business model, Singh underlines, is aligned to how digital consumption in India would expand in the future. From new-age marketing skills such as data analytics, content and category management, platform and performance marketing to developing new products, optimising supply chain and consumer service, 10club acts like a centralised resource, which enables all these brands to start growing across platforms. The differentiated moats in the 10club model mean that a lot of the acquisition is also funded through debt. “They are building a conveyor belt, and once done, you can add as many brands as you want,” he says. 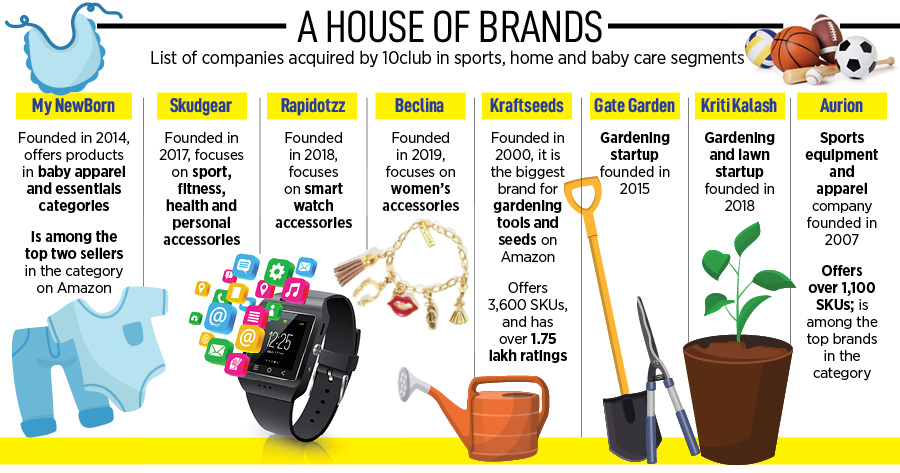 Bhavna, for her part, has painstakingly built moats. And the homework started even before starting 10club. Four months of extensive research, which included talking to a bunch of roll-up players across the world, including Thrasio and hundreds of sellers on Amazon across various categories, made it clear that ecommerce roll-up won’t simply be a plug-and-play. Another thing which came out clearly was that in India roll-up play won’t be similar to how it has panned out in America or other parts of the world. “Things need to be localised here. So, it's not a cut-copy-paste model here,” says Bhavna. The business model in the country, she underlines, would need to find its own nuances, valuation, integration plates, meaning and categories.

Elaborate homework by the repeat founder—Bhavna hates to be called ‘serial entrepreneur’—was just to ensure a glitch-free third innings. “My first one failed, and the second one was relatively successful,” she says. “I'm hoping this one is for the longer term.”

Back in 2020, all that Bhavna wanted from sellers was a ‘long-term’ view of the business model. Most of them initially were shocked with the buyout proposition. “What you're asking me to sell is my business. How does that make sense?” was how some reacted. Then there were some who were unhappy with the valuation. Bhavna didn’t want to pitch an unrealistic offer. “We were not going to pay ridiculous value to buy something,” she says, adding that it was difficult to explain to the sellers the way 10club was valuing their businesses. “We were not venture capitalists, and would not go 10x or 20x,” she adds. What also helped in convincing sellers was showcasing a team of senior members with ample experience under their belt.

There was another small, yet crucial, thing. At a time when Bhavna and her gang could have thrown money to solve the problem, the co-founder decided a few things that she would not do. Bumped up valuation was one thing. Second was to resist the temptation of doing too many things by getting into multiple categories. “The hardest thing in the roll-up space is to know what we don’t need to do,” she says. The more focussed a person is, she lets on, the more value she unlocks.

What might also help is knowing the potential set of challenges. Ecommerce roll-up is still a nascent space in India, the depth of the market is yet to be tested, and loads of money has entered into the segment. The need of the hour is to ask the right set of questions, reckon industry experts. “Is there enough quality assets available at the right pricing?” asks Singh of Fireside Ventures. Would too much of exuberance push up the prices too high? “The demand-supply of capital versus assets available is something that needs to be tested,” he says. Though the market is yet to see such an issue, it might be a potential challenge, he adds.

For Bhavna, the challenge is to keep the task simple and have a sharp focus on execution. “We need to keep building this the right way,” she signs off.