The homegrown unicorn is beefing up its portfolio by aggregating a colony of D2C digital brands, but with global leader Thrasio entering India, can the startup get ahead of competition? 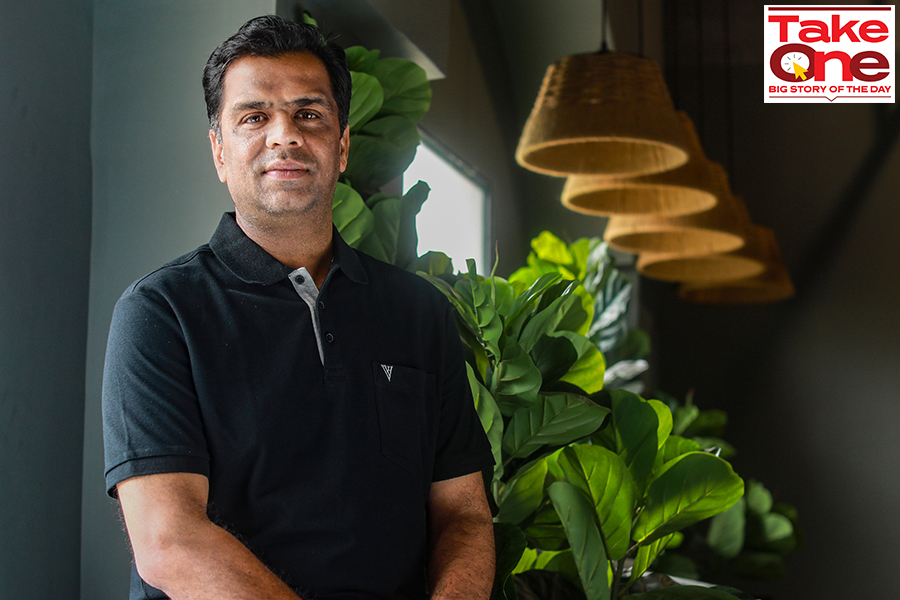 Prabhav Sharda remembers his emotional outburst last year. “Look, don’t waste my time,” he said to the caller, miffed. “Meet me only if you have a proper offer.” It was sometime in August. The Kolkata-based entrepreneur was being feverishly wooed by a bunch of buyers to sell Absorbia, India’s first moisture absorber brand, which had a modest beginning in 2009 when Sharda launched it after working as a brand consultant in Singapore for over a year.

The inspiration to start the unique venture came from dry cleaning, or rather, running away from it during his college days in Singapore. “Dry cleaning of suits used to cost $40-50. Damn expensive,” he recounts. As a student looking to save every penny in a foreign country, the hack was simple: Buy moisture-absorbing boxes that cost just $2!

Back in 2009, the young founder believed there is money to be made by selling a range of moisture-absorbing products in India. There was one problem, though. For Absorbia, there was no category, there were zero brands, and obviously consumer awareness was missing. “Well, that is why I saw an opportunity,” smiles Sharda. The fledgling company made a modest beginning by clocking 3,000 users in the first year, and the buyers came from traditional mom-and-pop and retail stores. The business labouriously gathered steam. A decade later, in 2021, Absorbia bloated its consumer reach to two million, with over 95 percent sales from ecommerce platforms. 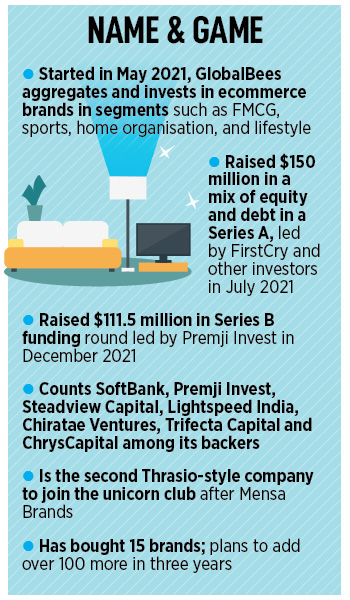 Though the business was still small, Absorbia was the biggest player in the segment and it was making money. For somebody coming from a business background—Sharda’s family was into the trade of aluminium castings—the question of selling a money-spinning business was out of mind. “I had no reason to sell,” he recalls.

In May 2021, meanwhile, Nitin Agarwal had all the reasons to buy Absorbia. “The opportunity is massive,” says the chief operating officer of GlobalBees, an ecommerce brands’ aggregator that started operations in May last year.

Reasons to build a branded play in India are simple. Over 90 percent of the Indian retail market is still unorganised; brand penetration in abysmally low; and the D2C (direct to consumer) brand space, thanks to the Covid-19 pandemic, is estimated to balloon into a $100 billion opportunity by 2025. “Historically, it has been very challenging for founders to scale brands,” he says. After a certain time, a founder needs to take a call on whether she should continue the bootstrapped journey or join hands to grow rapidly.

While people across the globe are consuming more brands, there are founders who can fuel the supply with their products. “The opportunity lies in marrying the two,” Agarwal says. GlobalBees, he adds, brings to the table what a founder desperately needs: Expertise in supply chain, marketing, brand building, product development and scaling. GlobalBees raised $150 million in a mix of equity and debt in a Series A round led by FirstCry and other investors in July 2021. “We are hunting for right partners who see value,” he says. 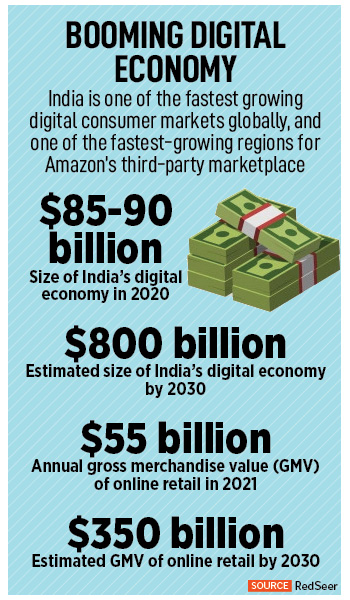 Sharda of Absorbia, for his part, saw value in the offer made by Agarwal last October. While the bootstrapped entrepreneur was already in talks with multiple investors, he went with GlobalBees and closed the deal in November. “I did not want 100 percent exit, and wanted to drive growth of the company,” he says.

Agarwal, meanwhile, was not fussy about ownership. Absorbia, after all, ticked all the boxes. It had a product-market fit, a steady stream of users, was unique in its offering, and the founder had an in-depth understanding of the consumer and the market. “It is not necessary that we drive such companies,” he says.

A month after the deal was closed, in December 2021, GlobalBees raised another $111.5 million in Series B funding led by Premji Invest, and became the second unicorn in the ecommerce roll-up space after Mensa Brands. “Our aspiration is to take Indian brands global,” says Agarwal.

In just seven months, GlobalBees has made its aspirations loud and clear. It has acquired 15 D2C brands across segments as varied as FMCG, sports and lifestyle (see box); has got a bunch of marquee investors backing the venture; and has galloped into the unicorn stable by raising over $260 million. The plan now is to add 100 more brands to its kitty in three years, which will add more muscle to its ecommerce roll-up play. Is it an over-ambitious target? Agarwal believes that GlobalBees has just scratched the surface. 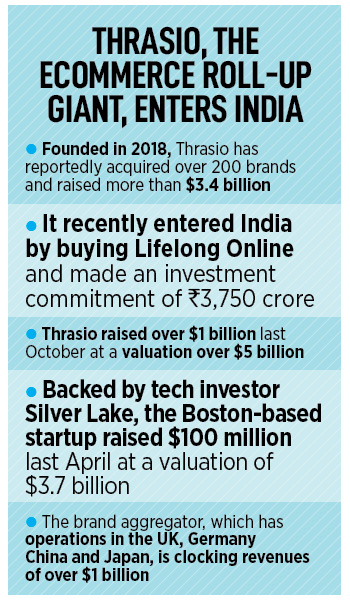 Industry analysts predict more bullishness in the roll-up space. “The segment is heating up and it is just the beginning,” says Nakul Saxena, head, fund strategy and investor relations at LetsVenture, an early-stage investment platform for startups. Saxena explains India’s voracious appetite for branded play. The pandemic tailwinds have resulted in wider adoption of digital way of life, from payments to online buying to experimenting with new brands.

Look at the data. India’s digital economy is set to jump from $85-90 billion in 2020 to $800 billion by 2030, according to consulting firm RedSeer. In terms of annual gross merchandise value (GMV) of online retail what it means is that from $55 billion in 2021, the numbers are estimated to leapfrog to $350 billion by 2030. “After China, the second biggest in terms of D2C space would be India,” says Saxena.

Founded in 2018, Thrasio has reportedly acquired over 200 brands, has operations across the UK, Germany, China and Japan, and has a valuation of over $5 billion. “The ecommerce aggregator model is big in the US and other parts of the world,” says Saxena. The intense activity in India—call it FOMO (fear of missing out)—he adds, is just a reflection of the global phenomenon. Though India is witnessing a bunch of Thrasio-like clones, the model in the country would be different from the one in the US.

Agarwal of GlobalBees agrees. Initially, there was a lot of scepticism around the business model. “There were a lot of naysayers,” he says, explaining why, for the first few months, commentators could not understand the value of the model. People wondered if the Indian ecommerce ecosystem has the depth and reach to churn out brands. “This has been answered. This box has been ticked,” he says.

A lot of noise, Agarwal underlines, has also emanated from a set of founders who already had venture capital backing. “This model, in fact, is not for them,” he says. Over 90 percent of entrepreneurs in India, Agarwal reckons, are not exposed to venture capital. “They have been silently building their bootstrapped business,” he says, adding that GlobalBees is eyeing such ventures, which have had a promising beginning and have potential to grow. 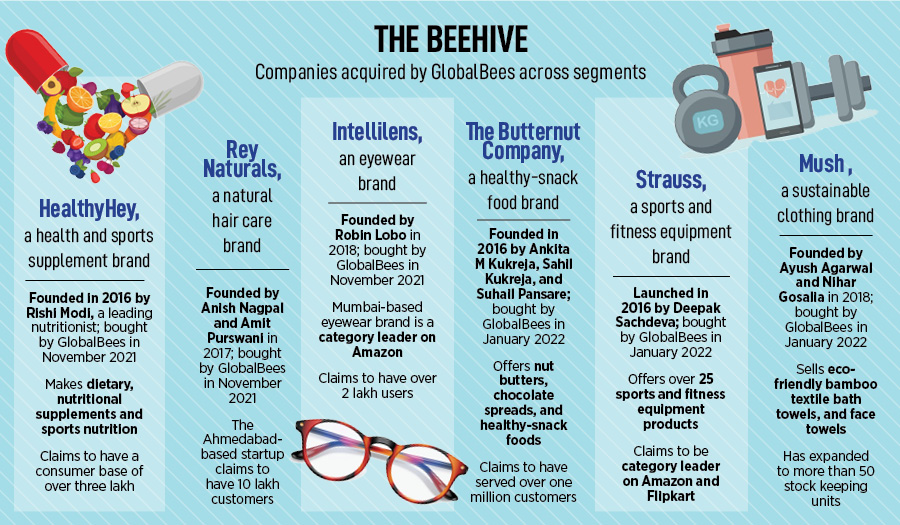 The flip side could be that the ecommerce roll-up space in India is not only getting crowded, but is also seeing big global names entering the fray. In simple terms, there is intense competition to buy assets, and the most loaded guy—in terms of money raised—might take the crown. Agarwal disagrees. “Capital is important, but [it] won’t be a deciding factor,” he says. Globally, he lets on, there have been instances of multi-billion dollar companies failing. “What will make a difference is execution,” he stresses. 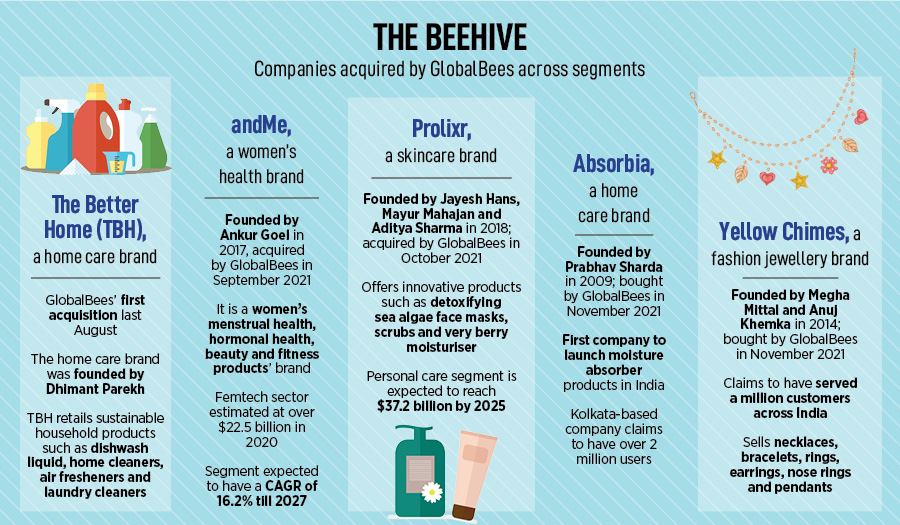 Saxena of LetsVenture raises another red flag. “Patience is the name of the game,” he says. Since all the players are in the acquisition stage, the segment will take a couple of years to mature and start giving returns. “One must not give in to FOMO and become hyper aggressive in buying brands,” he sounds a word of caution. “Look for value, stay invested, and execute properly,” is his advice to the founders who have rolled up their sleeves and are flexing their muscles to take pole position.

Tweets by @forbesindia
The omicron reset: Near 8% GDP likely in FY23 for India
Russia issuing subtle threats that go far beyond a Ukraine invasion