The valuations conundrum and hullabaloo around Mamaearth

Amid speculation, analysts say it is fair to question how valuations can double in a few months. The company that became profitable in FY22 maintains that its draft red herring prospectus has no mention of valuation 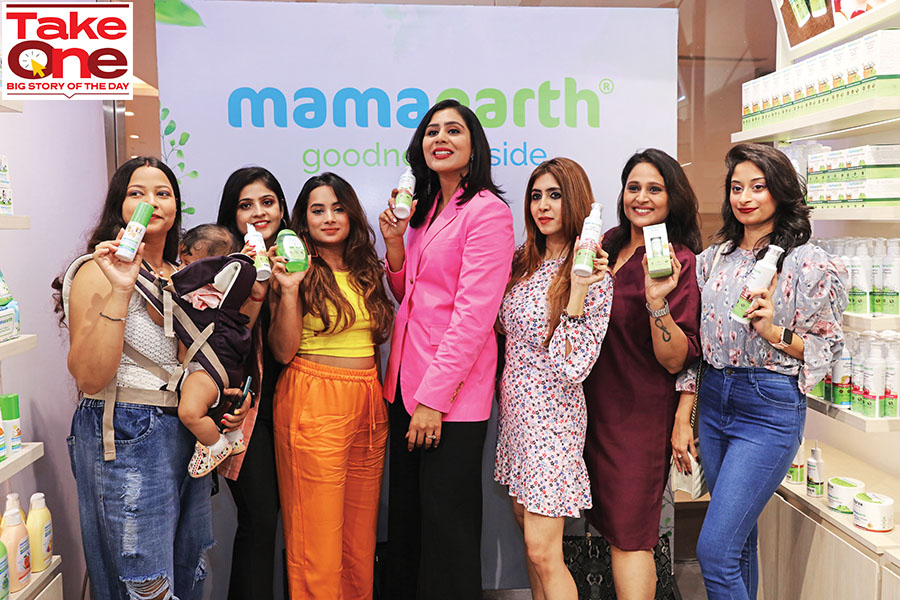 It's a draft red herring prospectus (DRHP) and a valuation—one that the founders disown—that have stirred a hornet's nest. Last fortnight, Honasa Consumer, which runs popular personal skincare brand Mamaearth, filed its DRHP to get listed on the stock markets via an initial public offering (IPO). The company is looking to raise Rs400 crore through fresh issue of shares, apart from an offer for sale (OFS) of around 4.7 crore shares, according to the DRHP documents.

Though neither the company nor its book running lead managers have confirmed its current valuation, a Reuters report in June had said that the Sequoia- and Sofina-backed company’s valuation is pegged at $3 billion or roughly Rs24,000 crore. That would make Mamaearth one of the most expensive companies in terms of valuations. Based on a net profit of Rs14 crore in FY22, its price-to-earnings (PE) ratio works out to 1,714.28 times. PE ratio or price multiple or the earnings multiple is a metric meant for valuing companies and to find out whether they are overvalued or undervalued. A higher PE ratio indicates a stock or company is overvalued.

In its last round of fundraising in January 2022, the company was valued at $1.2 billion. That sparked questions on how a company’s valuation can more than double to $3 billion in less than a year. In the last round, the company co-founded by the husband-wife duo of Ghazal Alagh and Varun Alagh had received investments of $52 million led by Sequoia, making it the first unicorn of 2022. Unicorn refers to a privately held company valued at over $1 billion.

“The company may argue that the turnaround in its financials in the second half of FY22 and first half of FY23 allows it to value itself higher. Valuations are decided by the promoters/selling shareholders based on advice from investment bankers, peer valuations, past valuations and the growth potential envisaged,” says Deepak Jasani, head of retail research, HDFC Securities.

“The company has only turned profitable in FY22. While the revenues jumped eight times over FY20-22 on a relatively low base of Rs110 crore, it would be unwise to expect for such an exponential growth to continue in future on a large base despite the fact that beauty and personal care (BPC) products are expected to report growth rate of 12 percent and online growth of 28 percent over 2021-2026,” Jasani adds. 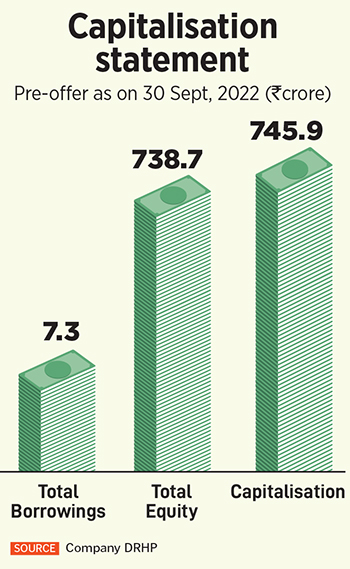 Marico, for instance, which has strong portfolio of personal care brands, has been able grow its profit at 15 percent compound annual growth rate (CAGR) over the last 10 years; yet it is trading at trailing-12-months (TTM) PE of 53 times.

“Additionally, 70 percent of Mamaearth’s business comes from online channels which have higher cost of customer acquisition. The company plans to set up 132 exclusive brand outlets (EBOs) over three years. Given the nature of the retailing industry, it would take a while to generate a required level of operating leverage and turn a new store profitable,” Jasani reiterates.

However, the company has cleared its stance on the valuations debate. “In our DRHP, as is the standard practice, there is no mention of valuation. Valuation discovery is a process which will take place over time as we get into deeper conversations with the investor community. We have not quoted or subscribe to the valuation numbers which are getting mentioned in various posts on social media. We have built this company and our brands with a lot of love, the same way we have raised our children,” Ghazal Alagh tweeted.

Alagh said the way one never leaves their children, they firmly stand behind building their brands and this company for times to come. “We started Mamaearth with the purpose of providing toxin-free products for babies since we ourselves could not find the right products for our baby. God has been kind, luck favoured us, consumers loved us, and our team has put in crazy efforts to take it to a level where we are today with six amazing brands serving millions of Indian consumers,” she added.

“Are the ‘sell side’ analysts discounting Mamaearth's 2123 earnings.... 100 years hence?” asks Shriram Subramanian, managing director of InGovern Research Services. “The way everyone is talking about Mamaearth, it looks like the IPO will be withdrawn even before it takes off. Else, the stock will eat humble pie.”

Also read: Sudden spurt in IPO markets: What changes in the second half of FY23?

Mamaearth’s DRHP comes at a time when stock markets have turned volatile with the abundant liquidity drying up as central banks around the world are hiking interest rates.

Also, large new-age technology companies like Nykaa (FSN E-Commerce Ventures), Zomato and Paytm (One97 Communications) which went public recently have performed badly in the secondary markets with severe value erosion for shareholders. For instance, since listing, investors in the IPO of One97 Communications have lost almost 70 percent of their investment. That has made investors conscious of valuations of IPO-bound companies and raise questions on their business prospects. 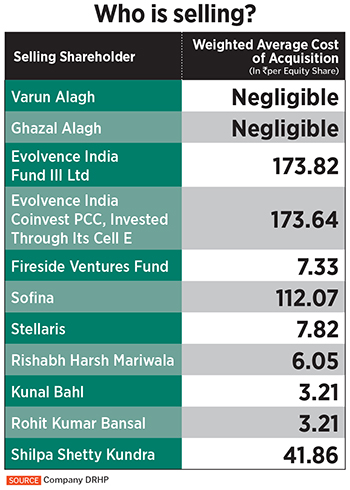 “Definitely it is fair to question how valuations can double in a few months. Stock market and, in particular, the IPO market are ‘buyers beware’ markets. Investors need to exercise due caution and diligence before investing their money,” Pranav Haldea, managing director, Prime Database Group, says.

“At the same time, judging IPOs until perpetuity on the basis of their price and saying what was expensive and what was fair value is incorrect. What timeline should be considered? Is it one month, a year or five years? Once the IPO is listed, it is like any other company in the secondary market, share price of which moves based on factors like the company’s own performance, how the sector is doing, and how the overall economy is performing. When an IPO is subscribed even a single time, it shows that there was enough demand for that issue at that particular price. No one is forcing anyone to buy after all,” Haldea adds.

As stock markets skyrocketed to record levels in 2020 post lockdown, companies rushed to get listed, but most analysts and investors felt those issues came at steep valuations. That hadn’t curbed investor participation enthusiasm at all.

“While some of the technology companies (Paytm, Nykaa, Zomato, Car Trade, PB Fintech) sought high valuations, large part of which can be attributed to scarcity premium being demanded by them and the large potential to grow for survivors, it is not common for consumer companies to demand very high valuations given the availability of comparables," Jasani adds.

Some of the consumer companies that IPOed in 2022 include Bikaji (TTM PE of 94 times) and Adani Wilmar (TTM PE of 41 times). For Nykaa, the BPC segment accounted for nearly 89.6 percent of total revenues for FY22 and contribution from owned brands to Nykaa’s BPC division stood at 11.1 percent in FY22 respectively. “Nykaa is getting valuations at 159 times TTM PE. Nykaa being a platform company can increase revenues and profits at a comparatively brisk space by adding new revenue streams at lower costs,” Jasani elaborates.

However, fund raising through the IPO route halved in 2022. Prime Database analysis showed 40 companies collectively raised Rs59,412 crore in 2022 compared to a record Rs118,723 crore raised by 63 IPOs in 2021. As many as 17 out of the 40 IPOs came in the last two months of the year, which shows the volatile conditions prevalent through most of the year which are not conducive for IPO activity.

Only one (Delhivery) out of the 40 IPOs was from a new-age technology company, pointing towards the slowdown in IPOs from this sector. There were seven new-age technology company IPOs raising Rs42,826 crore in 2021. In comparison to 2022, response of retail investors also moderated. The average number of applications from retail dropped to just 5.92 lakh compared to 14.25 lakh in 2021 and 12.77 lakh in 2020.

The company proposes to utilise the net proceeds of the IPO towards advertisement expenses in enhancing awareness and visibility of its brands (Rs186 crore), Rs34.27 crore for setting up new exclusive brand outlets, Rs27.51 crore for investment in its subsidiary, BBlunt, for setting up new salons while the rest will used for general corporate purposes and unidentified inorganic acquisition.

“If we fail to identify and effectively respond to changing consumer preferences and spending patterns or changing beauty and personal care trends in a timely manner, the demand for our products could decrease, causing our business, results of operations, financial condition and cash flows to be adversely affected,” the company says in the DRHP. 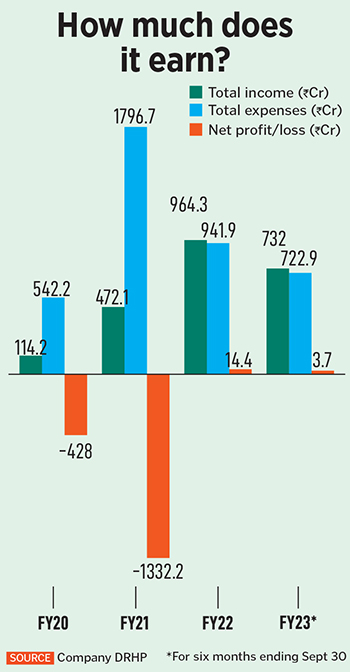 The launch of new brands or products that prove to be unsuccessful could affect our growth plans which could adversely affect our business, financial condition, cash flows. And results of operations are also flagged off as risk factors in the DRHP.

Its dependence on celebrities and social media influencers as part of its marketing strategy may adversely affect its business, it says. “We cannot assure you that we will be able to sustain the levels of revenue growth that we have had in the past. As a relatively new player in the BPC market, we have a limited operating history and there is no assurance that we will be able to maintain our past rate of growth and succeed in realising our growth strategy. Further, a number of our strategic initiatives are in the initial stages. While we may experience initial success with such initiatives, there is no assurance that these will succeed in the long term,” the company adds.

In the DRHP, Honasa says it is the largest digital-first BPC company in India in terms of revenue from operations for FY22, according to a RedSeer report. It has a portfolio of six BPC brands with differentiated value propositions and as of September 30, 2022, its flagship brand, Mamaearth, has emerged as the fastest-growing BPC brand in India to reach an annual revenue of Rs1,000 crore within six years of launch.

According to the RedSeer report, the market for BPC products in India is expected to grow from approximately $17 billion in 2021 to $30 billion in 2026 at a CAGR of around 12 percent, which is among the highest within the broader retail categories and faster than other retail categories in India during this period. “The BPC products market lends itself well to digital penetration and the online BPC market, which is currently sized as $2.5 billion, is expected to grow at 27 percent annually to be around $8.4 billion by 2026, translating to an online penetration of 28 percent,” it adds.

Tweets by @forbesindia
Playing by the rules: Can the self-regulation model work for the online gaming industry?
Photo of the day: Cold cripples capital