Will Wendy's get a bigger bite of the Indian market this time?

In a global first, Wendy's cloud kitchen tie-up with Rebel Foods gives it a chance to come back in the game in India. Can the world's third biggest burger brand flip the bun? 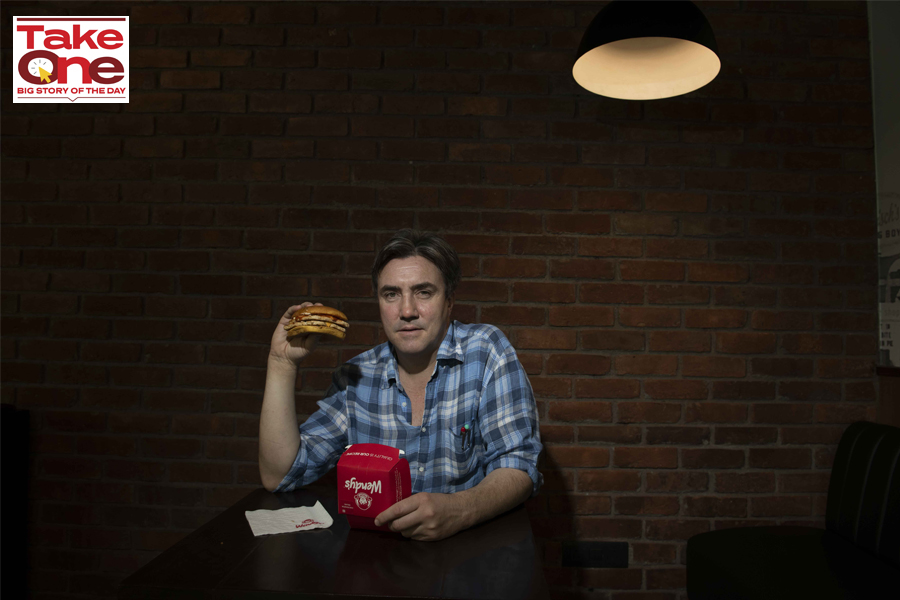 Gurugram; May, 2015
It was a majestic welcome, befitting a ‘queen’. Wendy’s, the world’s third biggest burger chain, was making its India debut in a massive 2,500 square feet restaurant. “The reception was sensational,” recalls Jasper Reid, chief executive officer of Sierra Nevada Restaurants, the master franchisee for Wendy's in India. The peak of a sweltering Indian summer couldn’t stop hundreds from jostling for space to take a juicy bite of the queen. “Huge queues remained for over a month,” says Reid, who managed to get the American burger brand from Columbus, Ohio, just seven months after rival Burger King set up shop in India.

Wendy’s had done its homework by rolling out entry-level burgers suited to Indian taste and pocket—spicy aloo crunch and junior chicken for Rs 59 and Rs 79, respectively. Yet, most of the crowd rushed for the premium non-vegetarian offering—Baconator and Double Baconator—which started from Rs 199 and went up to Rs 365. The queen—Wendy’s got its name from the nickname of Melinda, daughter of founder Dave Thomas—was mighty impressed. It made her feel exclusive, and pricier. In a market where quick service restaurant (QSR) big boys—McDonald’s, Domino’s, Burger King, and KFC—were fighting for the mass, the queen stood out. A big challenge in QSR, Reid underlines, is to ask this question: Can you get a bit of premium out of consumers? Can you get her to pay just a little bit more? Wendy’s, it seems, had cracked the Holy Grail in one go.
Unfortunately, it turned out to be a false sense of accomplishment. In India, Wendy’s appealed to an inverted pyramid of consumers—premium, core and value. “What we didn't really have enough was the value bet,” recounts Reid. When contrasted with McDonald’s aloo tikka burger and chicken McGrill—starting at Rs 20—the queen lacked mass appeal, and mass pricing. “Hats off to competition,” says Reid. Giving credit where it’s due makes sense. Reason: Indian QSR is a value, volume and mass game.

The queen also had other issues to contend with. The boon—premium offering and a feeling of grandeur inside the grand outlet—turned out to be a curse. “It’s created a false impression of costliness,” rues Reid. Perceptions and impressions, especially the first ones, do play a critical role in the life of a brand or an individual. Another problem for Wendy’s was a slow pace of expansion. While Wendy’s was not even fit to qualify for any kind of arithmetic progression, rival Burger King was galloping. By FY18, the queen was not even one-tenth of Burger King, which had 129 outlets. In spite of having an Indian partnership with Carnation Hospitality, a company promoted by Amtek Auto, Wendy’s didn’t have much fuel for expansion. “We were privately and personally funded,” explains Reid. “We're entrepreneurs and we just couldn’t do 40 sites.”
Back in 2018, losing a joint venture partner also played spoilsport. Reid bought out the Indian partner Amtek, which was in serious financial trouble. Since then, it has been a solo journey. Till last December, Wendy’s had just four outlets in Delhi-NCR compared to close to 200 of Burger King’s across the country.
In that same month, it tied up with Rebel Foods to open 250 cloud kitchens. The move was seen as rebellious. Reason: No QSR giant in the world has made such an audacious bid to scale up through dark kitchens. Sierra Nevada Restaurants was also upping the ante. It decided to open 150 outlets over the next few years. But the big focus first would be on cloud kitchens.

In six months, the Wendy’s-Rebel venture has launched 21 cloud kitchens across Delhi-NCR and Mumbai, and another 12 will go live in a week or so. Reid is delighted. “Long live the guerrilla queen,” he beams. Over the last few years, the biggest change in the QSR industry has been delivery. “It’s a profound thing,” he adds. Cloud kitchens, Reid explains, do two things. First, it takes brand to places where it might not have been financially feasible to set up an outlet. Second, it helps you scale at a furious pace, and at a fraction of a cost. 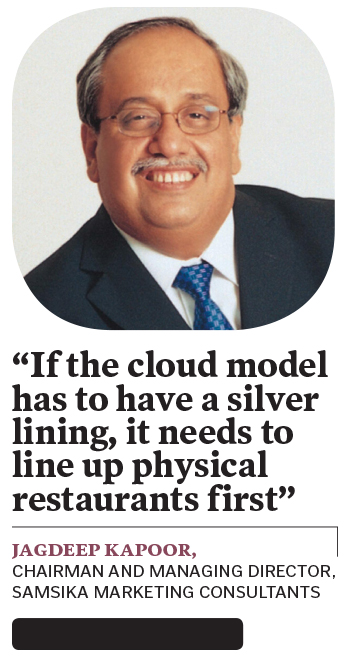 Kallol Banerjee, cofounder of Rebel Foods which has cloud kitchen brands such as Behrouz Biryani, Ovenstory Pizza, and Faasos, explains the nitty gritty of the relationship with Wendy’s.
The Rebel operating system, he points out, comprises three things. One, a full-stack technology platform, from inventory and kitchen management to demand management and fulfilment. Two, supply chain capabilities for sourcing, warehousing and moving input materials safely in any shape and form. And, last, culinary expertise and capabilities to break down menus into small procedures. These elements, Banerjee claims, are available in all 350 kitchens of Rebel Foods across 50 cities in India. Any brand that comes on board can ride on such expertise and scale easily to become a national brand, and available for delivery. After extensive due diligence, he underlines, Wendy’s was confident to quickly scale up rather than create awareness by building offline stores, which would be much more time-consuming and capital-intensive.
While it’s a plug-and-play option for scale for Wendy’s, Rebel benefits by associating with a world-class burger brand, which needs very little marketing effort for awareness building on delivery, contends Banerjee. “We are looking to be available across 100 locations by the end of this year,” he says. “We are committed to grow the brand in India like never before.”

The going though, reckon marketing and branding experts, might not be easy. The biggest challenge may be the poor visibility of Wendy’s. Though restaurants might be closed due to the lockdown, people have been ordering online. But there is a catch. “Which restaurant brands are being chosen by consumers,” asks Jagdeep Kapoor, chairman and managing director of Samsika Marketing Consultants. Answer: Brands with physical presence such as McDonald’s, Burger King, Domino’s and KFC. “Low-awareness brands like Wendy’s are relatively ignored,” he says, adding that even a cloud kitchen company like Rebel Food had to aggressively advertise on television for its biryani and pizza brands. What’s more, a physical presence creates trust. Wendy’s seems to have missed out in terms of a physical presence, awareness and consumer experience on the premises. “If the cloud model has to have a silver lining, it needs to line up physical restaurants first,” adds Kapoor.
Back in 2018, Reid was counting the silver linings. There were two. One, Wendy’s handicap—the excruciatingly slow pace of growth—turned out to be its biggest blessing. Four restaurants meant that Reid had a chance to start from scratch and could experiment and get its act right in terms of product, pricing and proposition. The mantra in the QSR game, he explains, is location. It’s a bit like building a Tesla car and having a Tesla showroom. If one fine day you decide to convert that into a Tata showroom, it can’t be done because of the scale. Having four outlets, he stresses, meant changing only four, not 40 or 100. 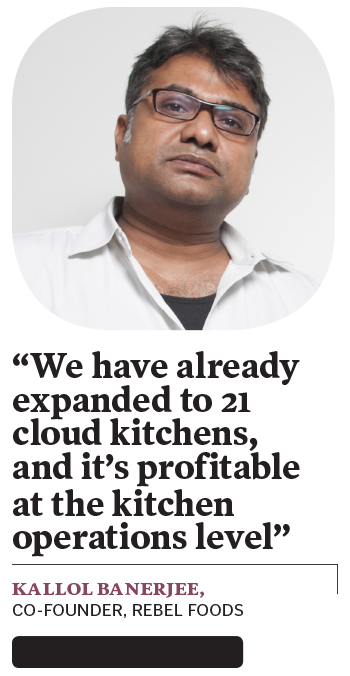 Reid started with pricing. Wendy’s badly needed a ‘value’ offering to widen the appeal of the queen. The menu was optimised, and a burger’s starting price point dipped to Rs 29. Next on Reid’s menu was store size. From 2,500 sq ft, it was brought down to 1,500 at a model store in Kalkaji in Delhi. In fact, the other two stores are even smaller. He again looks at the bright side of not having a wider presence. There are QSR brands in developed markets, he reckons, that built a lot of capacity and now suddenly, with delivery taking off, the space has become redundant. “If you're an airline, you just change the aircraft type. But once you've locked into 2,500 square feet, you can't offload it,” he explains.
When McDonald’s and Burger King were expanding at a furious pace, Wendy’s was lying low. There was no point competing with the deep-pocketed guys. “We didn’t have a sugar daddy,” says Reid. McDonald's funding model, he says, is McDonald's money. “They can play a very, very long game,” he adds. Wendy’s was looking at store economics. For us, Reid explains, unit level has to work.
Another silver lining was being written off by critics. “If people don't see you doing a 100, or 500 sites, they think you're dead,” smiles Reid. “It's a funny thing. But we were alive and kicking.” Though the temptation to open more outlets was always there, Wendy’s never fell for it.
The question to ask now is: Is queen in a better position to conquer? Reid smiles. “Men need kingdom. Women don’t need a territory to rule.” Wendy’s, Reid underlines, likes a fight. The Queen’s Gambit is on.

Tweets by @forbes_india
Future of Money—Digitalisation will help in value creation: Gaurav Deepak
A plastic world