With their risky, unconventional bets, the angels at Agility Ventures mean business

Dhianu Das and Prashant Narang are trying to rewrite the narrative of angel investing in India. Can they script an enduring story? 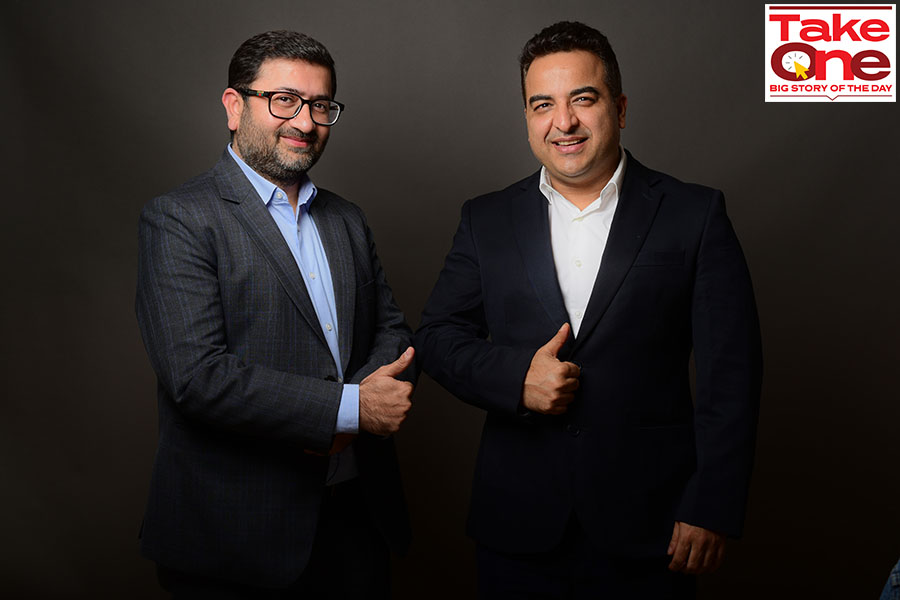 “Have all angels descended on the earth,” I asked ‘angel guardians’ Dhianu Das and Prashant Narang, trying to satiate my curiosity. “Are heavens deserted? Is there anybody left up there?” The duo smiled. “There is not much happening over there. It’s not exciting,” reckons Das, an entrepreneur-turned-investor based out of Gurugram. His partner shares the secret behind the world, and India in particular, getting crowded with angels. “They have all come to make money,” says Narang, a chartered accountant who was startled by eye-popping returns made by angel investors by putting money in one of the riskiest asset class of investment.

Meanwhile in Varanasi, Hemant Agarwal was hooked to the startup revolution brewing in India, and his home state Uttar Pradesh. During his interaciotn with students at the Atal Incubation Centre, Banaras Hindu University, last November, Piyush Goyal, union minister for commerce and industry, reportedly claimed that 7,000 startups were registered from across Uttar Pradesh, and over 236 of them were from the holy city of Varanasi.

Agarwal spotted an unexplored opportunity. He wanted to grab a meaty slice of action. “I wanted to invest in startups, and the best way to do so was to turn angel,” says the rice trader from Varanasi who has been actively trading in stocks for over a decade. “I knew it’s risky, but that’s the name of the game,” says the 45-year-old, who has started investing in startups through angel investing platforms over the last two years. 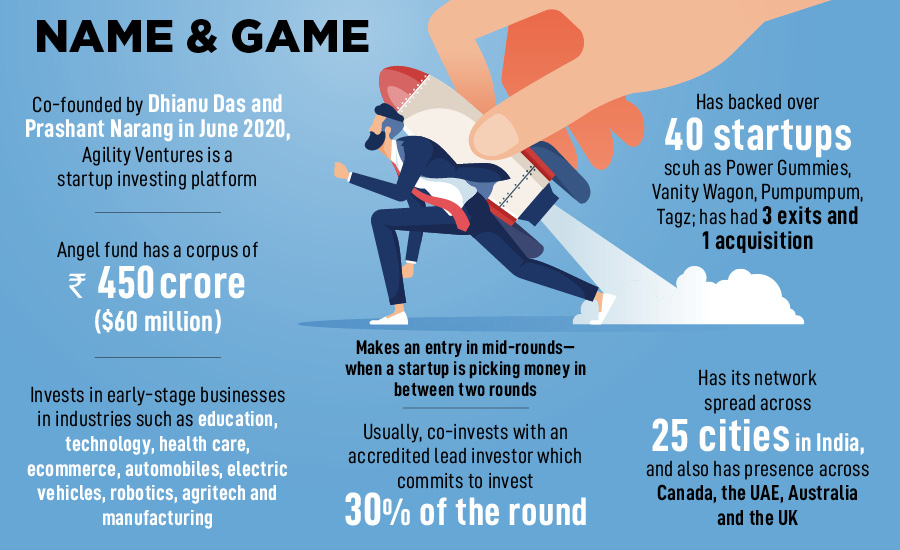 Around 1,100 kilometres from Varanasi, a real estate dealer in Chandigarh explains why startup is the new currency for him. And the biggest reason—and this also happens to be the weirdest one—is snob value. “One of my friends invested in a startup which is a soonicorn,” says Vikrant Chaddha, who runs a real estate consultancy. Somebody who has been in the realty business for three decades, Chaddha now finds his first love boring. “The market has been muted for years. There is no excitement,” he reckons. And add to it, he underlines, the return is delayed. “Angel is instant gratification,” he says. ”You don’t have to wait for years,” he adds. But what if the bets doesn’t pay off? After all, over 90 percent startups fail. Chaddha flips the question. “What if I happen to be the lucky one who hits the jackpot with the remaining 10 percent,” he laughs. The builder has already seen enough financial busts to be scared of not getting returns from startups. India, he says, is in the midst of a strong startup boom. “The story won’t go bust,” he says.

Also read: Startup valuations: If big deals are overvalued, what about small ones? 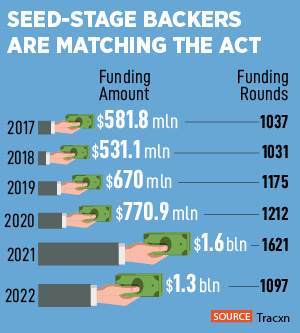 What this simply means is that the amount of money put in by angel investors per deal has increased. From a low of a few lakhs that they used to pump in startups a few years back, the amount has gone well past a crore. “The average ticket size has increased,” says Narang. “In fact, two startups recently raised Rs10 crore from us,” points out Das, highlighting that Agility invests between Rs1 crore and Rs10 crore. “Investors from Tier-II and beyond have doubled to 20 percent over the last three years,” says Narang.

Agility co-founders list out reasons behind the strong undercurrent of angel investment across India. First, people have seen heady valuations. From just one unicorn—a privately-held company commanding a valuation of $1 billion—the country saw the numbers rising to nine in 2019. Then came two years of bump: 16 and 48 unicorns in 2020 and 2021, respectively, according to Tracxn. Even during the funding winter of 2022, 20 startups dashed into the unicorn stable. “Imagine the liquidity and exits in multiples that the angels got in most of these startups,” says Narang.

Second, the trend of startups, even loss-making ones, hitting the public market turned out to be another encouraging sign. Exits for investors—whether in the form of acquisitions of listing—is always a sign of maturing of the startup ecosystem. “People don’t invest money to get it blocked, right?” asks Das. “They want exit and it can’t be inordinately delayed,” he says. The fact that India has seen a consistent increase in acquisitions—both by the bigger, loaded startups as well as traditional companies—again conveys the message that there is ample money to be made.

Third, angel networks often back the odd ones out. There are thousands of startups that have the potential but fail to grab the eyes of venture capitalists. Take, for instance, Ranchi-based startup Puresh Daily, which was backed by Agility last year. The subscription-based startup from Jharkhand offers milk produce from their farms to across cities of Ranchi, Ramgarh and Bokaro. They offer chemical-free products through value chains augmented by AI that allows them to provide traceable logistics, green packaging, says Narang.

Also read: How The Startup Capital And Valuation Game Has Changed In India

Then there is Good Fettle, Mumbai-based F&B brand which claims to pioneer the concept of low-calorie ice cream in India. The third one is Jaipur-based maker of electric two-wheelers BattRE. “This is the only profitable EV company in two-wheelers with a turnover of Rs100-crore plus,” claims Das, adding that still the startup has not yet hit the radar of big VCs. 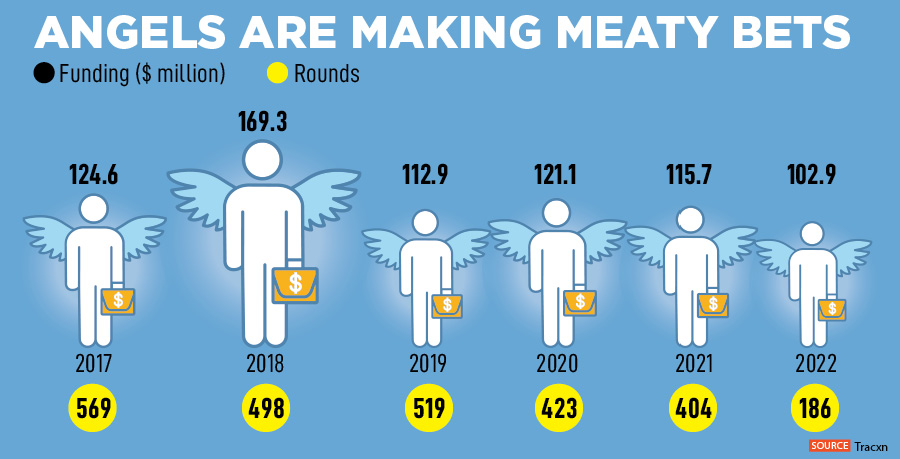 The going, though, might throw some challenges for angels, and angel networks. First is the possibility of slowing down of the pace of exits. “Most likely, exits will moderate in 2023,” reckons Das, citing tough macro environment. The second challenge stems from a herd mentality. Though it’s true that anybody with money can become an angel, the risk amplifies if one is reckless. “Investing without some sort of understanding and hand-holding makes this asset riskier,” he says, though he quickly adds that angels have little to worry about. “There is enough to keep angels busy on the earth. After all, they mean business,” Das signs off.

Tweets by @forbesindia
'Spare' no one? After months of hype, Prince Harry's memoir goes on sale
Photo of the day: 'RRR' makes history