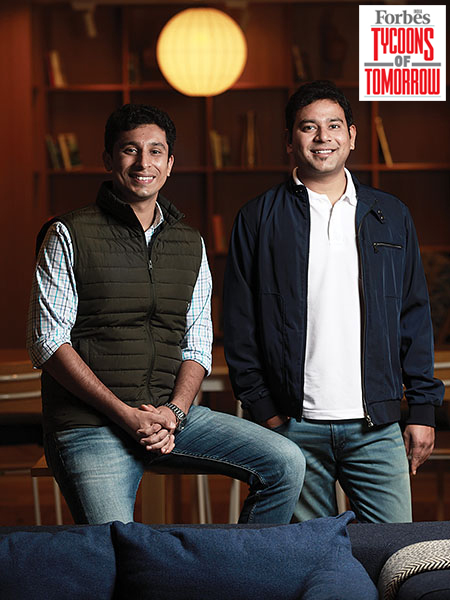 (From left) Meesho co-founders Vidit Aatrey and Sanjeev Barnwal have also invested in over 30 startups in India and Southeast Asia
Image: Selvaprakash Lakshmanan for Forbes India

About a year ago, Vidit Aatrey recalls a woman telling him: “Itne bure din kaise aa gaye ki ghar ki bahu ko kaam karna pade? (How did our days turn so bad that the bride of the house has to earn?)” The lady was alluding to the opposition at her home to her desire to use the Meesho app and make money by selling dresses and household items.

Aatrey was comparing the growth of Meesho in South India with states like Bihar and Uttar Pradesh, and the North, where the co-founders hail from. Women in the South had a little more freedom and Meesho’s early uptake was stronger in the region.

Aatrey and friend Sanjeev Barnwal founded the social commerce venture towards the end of 2015. As with most startups, there were course corrections and pivots, but by the time the Covid pandemic hit, Meesho had millions of women using it. In 2021, the number of women micro entrepreneurs surged 2.5x to cross nine million, the company said in a press release on December 2. And Meesho is beginning to make a dent even in the conservative small-town and village communities in the country.

Meesho itself is changing, with the founders ready to go after a much bigger vision—one that has come a long way from the early years of WhatsApp group-based purchases. “We are building the single shopping destination for the next billion consumers in India,” Aatrey says. 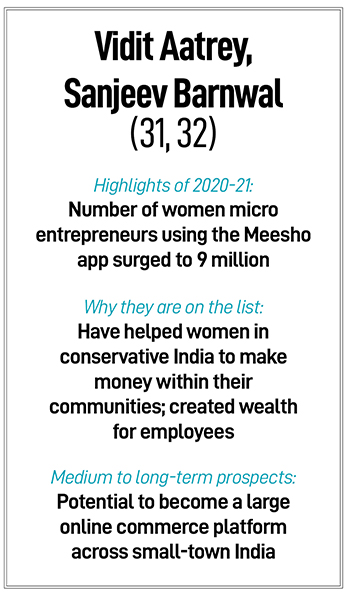 That means building a “horizontal platform” to bring a 100 million small businesses and merchants online from the smallest of towns and eventually villages. “Today, I’m super proud that five percent of all households in India come to the Meesho app every day,” Aatrey says. Another change is that Meesho is now used by a growing number of consumers as well.

Investors took their time initially as Aatrey and Barnwal figured out their business model, but now can’t get enough of them. After its latest round of funding—$570 million in Series F—Meesho is privately valued at nearly $5 billion, making it one of the most valuable startups in India. Investors include Fidelity Management & Research Company, B Capital Group, Prosus Ventures, SoftBank Vision Fund 2 and Facebook.

“Meesho is a phenomenal story. It is a category-creating startup, not just a category-defining one,” says Amit Somani, managing partner at Prime Ventures, an early stage venture capital firm in Bengaluru. “It will probably be ranked alongside companies like Airbnb.”

The successive investments and the corresponding surge in value also made the entrepreneurs personally wealthy beyond anything they might have expected a few years ago, handing out pamphlets to shoppers and shopkeepers to try out their app. And the two have also made many of their employees prosperous with three rounds of share buybacks via their employee stock option plans.

From India’s startup ecosystem perspective, their impact has spread beyond the employees to the next generation of founders. Between Aatrey and Barnwal, the duo has invested in over 30 startups in India and Southeast Asia. And they share their experience and offer mentorship to whoever asks for it.

“We are doing this because we know that angel investors matter, not only for that first cheque, but also the mentorship. It is a big deal in the early stage,” Barnwal says. “And apart from giving back to the ecosystem, it allows us to stay connected to newer founders, newer business ideas, which keeps us informed as well and that is also an exciting part of whatever we do.”

The two co-founders have been friends from their IIT-Delhi days—same batch, same hostel. That’s helped too, having each other through lows and highs. And both credit their wives as their bulwark, handling everything else so that they get to build Meesho.

“With each milestone, we are dreaming bigger and bolder. We have definitely changed as leaders, and it’s a crazy growth journey for us,” Barnwal says. The two have come to redefine the kind of achievement that youth from India’s middle class can go after today. And they are only getting started.

Tweets by @forbesindia
Varun and Ghazal Alagh: Beauty tycoons with a purpose
Thoughts of tycoons