Pranav and Siddarth Pai: VC with a difference

With strong performances by the funds of their VC firm 3one4 Capital, the Pai brothers have found their mojo in backing startups that are not the usual VC heartthrobs 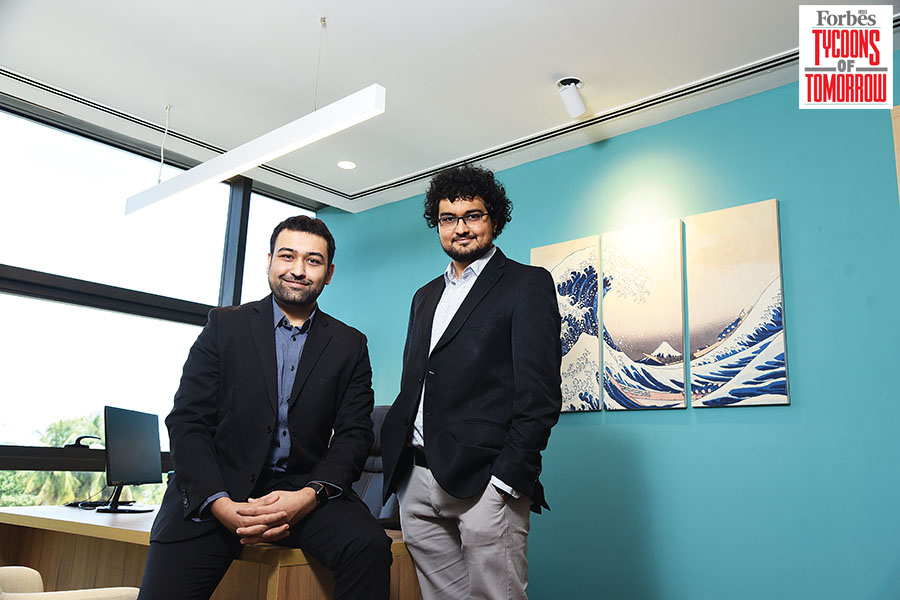 (From left) Pranav and Siddarth Pai’s early-stage VC firm 3one4 has assets under management of Rs 2,300 crore; Image: Hemant Mishra for Forbes India

Pranav and Siddarth Pai, founding partners of venture capital (VC) firm 3one4 Capital, always chose to stand out, not just from the crowd of mushrooming VC firms in India, but also among the startup businesses they chose to invest in. Six years since founding the company, this early-stage VC firm has assets under management of Rs 2,300 crore ($300 million), one unicorn in its portfolio, and is ranked as India’s top performer for two of its funds, according to a 2021 alternative assets report from Preqin, a global financial data and analytics platform. Unlike high-profiled US-based VC and private equity (PE) investors, 3one4 has not invested in companies where the sustainability of business models is not clear. So the ever-popular food delivery engines, pure payment wallet platforms and horizontal ecommerce ventures—which have been the favourites of VC investors for years—were and still are all missing from their portfolio. 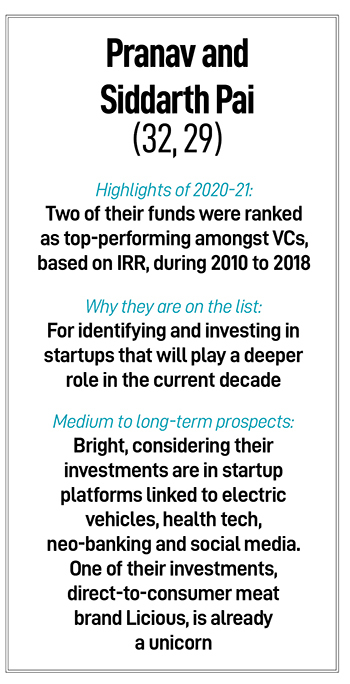 Instead, they have invested in businesses that are impacting and revolutionising our everyday lives: From mobility to banking and health care. Some of their latest investments include Exponent Energy, which provides flexible charging solutions for electric vehicles; Yulu, a mobility-as-a-service platform to make commuting in cities sustainable; Breathe Well Being, a clinically proven digital-first app for diabetes reversal and management; and Jupiter, India’s retail digital bank targeted towards millennials. 3one4 has also picked up various non-mainstream companies, which include Licious, an online meat and seafood ordering company, and Koo, a micro-blogging, multi-lingual social media platform that aims to challenge Twitter in its popularity. Pranav, 32, launched the first fund of the firm 3one4 (a play on the mathematical formula π and the family name Pai)—along with Siddarth in 2016—after working with a Silicon Valley startup EdCast from 2013 to 2016. He had completed his electrical engineering from Stanford University prior to that, while Siddarth completed his graduation from St Joseph’s College of Commerce in Chennai. The brothers have a tough professional legacy to match, being the sons of Infosys’s former CFO and board member Mohandas Pai. Living digitally The Pai brothers were always convinced about their investments. The decisions are backed by the belief that some of these startups will not just become unicorns but will revolutionise the way we live. The post-pandemic world is witnessing an accelerated shift towards adopting digital means. “The futuristic became real very fast. We are seeing the cultural impact of startups on our lives, whether it be food delivery, groceries or medicines,” says Pranav, founding partner and CEO. What has also changed dramatically is the fact that due to the flurry of initial public offerings (Zomato, Indigo Paints, PolicyBazaar, Star Health, FSN E-Commerce/Nykaa and One97 Communications/Paytm), Indians are waking up to the possibility of buying the stocks of these digital platforms.


This is unlike earlier decades when investors bought stocks of companies such as Infosys, Wipro, Reliance, NTPC or Hindalco, and were not necessarily influenced by the products they used every day from these companies. “The startups ecosystem will drive India’s economy forward,” Pranav adds. In 2021, the surge in valuations of startups has been both amazing and, to an extent, alarming. India added 41 new unicorns in 2021, taking the total number of unicorns in the country to 78, according to Venture Intelligence data. India had 37 unicorns by the end of 2020. It is now third, well behind leader United States (489) and China (277), in terms of number of unicorns but well ahead of UK (32) and Germany (18).

3one4 Capital has found its mojo not only through strategic investments, but it has also gained confidence from the fact that family offices and large institutional investors have invested into its latest Fund III. The new fund will continue to focus on investing in software-as-a-service (SaaS), enterprise automation, direct-to-consumer, media/content and deep fintech companies. Entrepreneurs and co-founders Anish Achuthan and his wife Mabel Chacko, who have built the over $600 million neo-bank called Open, are grateful for the advice the Pai brothers gave them during their early interactions.

“They advised us to focus on small businesses as our target and not just startups. Also, they wanted us to use the existing banking network and not just provide digital services,” says Achuthan. “They provide the right opinion, feedback and engagement, irrespective of whether they plan to make an investment or not into a company,” adds Chacko. Besides 3one4 Capital, Temasek and Tiger Global are investors in Open. Preqin has ranked two of 3one4 Capital’s funds—Rising I and Fund II (scheme II)—to be top performers, based on the internal rate of return on these funds, of 37 and 35 percent respectively, for the period between 2010 and 2018. 3one4 is the first approved Indian VC signatory of the United Nations-supported principles for responsible investment (PRI) network. Siddarth, 29, is also the environment, social and governance (ESG) officer at 3one4 Capital. He believes that “India is mainstreaming its regulatory compliance” for alternatives—such as startups, e-pharma and social media companies. “The challenge, in coming years, will be whether Indian startups will be allowed to list overseas,” he says. Pranav and Siddarth believe that by the time the current decade ends, India could be the third largest economy globally, behind US and China. “In coming years we need to build not just a different type of institution, we need to contribute more to the VC ecosystem and ensure that more VCs thrive,” Pranav says. Smart and knowledgeable words these.

Tweets by @forbesindia
Best of 2021 Ep. 9: Mark Papermaster at AMD on advances in the semiconductor industry
Will shortened isolation periods spread the virus?