Parth Jindal has carved a niche for himself in the JSW Group, overseeing cement, paints, sports, and the US Steel operations 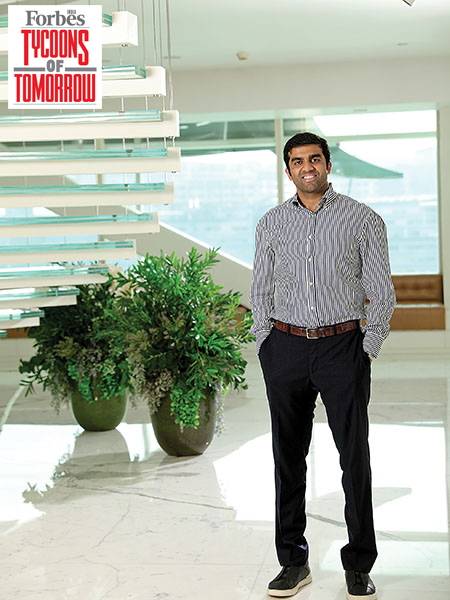 During his time at Harvard Business School (HBS), Parth Jindal was keenly aware of the need to move the JSW Group away from cyclical businesses. Steel, its mainstay, was subject to the vagaries of the commodity cycle. Why not explore opportunities in adjacent but less cyclical industries, he thought.

It was during his second year that Jindal worked on a project to understand the group and identify new business opportunities. He’d gotten a four-credit course approved by HBS. “There was also the desire to do something on my own and not just spend time in the legacy steel business,” says Jindal, MD, JSW Cement. This would also help him cement his position with employees. He didn’t want his identity to be tied to primogeniture.

By mid-2016, when Parth returned to India, he’d already hired a CEO for a new paints business. He’d studied the market and was convinced that a new player could break into what he believes is an oligopolistic structure, with Asian Paints controlling 55 percent of the market and Berger Paints accounting for 17 percent.

Into this market entered JSW Paints with a plan to play in both the decorative and industrial paint businesses. Helping them was the fact that they had some captive consumption in the colour coated sheets that JSW Steel supplied. But it is the decorative segment that brings in the margins and breaking into that is tougher. Jindal does admit that they have been “battered and bruised by Asian [Paints]” but he still enjoys the challenge of building a new business from scratch. 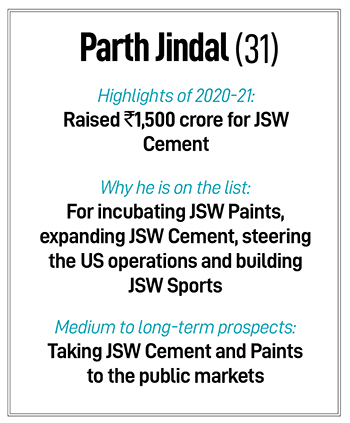 There are some signs that JSW Paints could be turning the corner. Their main strategy has been to offer any colour at the same price. Worldwide, paints are offered at the same price, but, in India, a customer selects a colour and the dealer puts a price to that shade.

This, Jindal believes, is unnecessary, as the paints are made in tinting machines that are supplied to the dealer by paint companies. While these cost ₹1 lakh, dealers typically only have one machine from one company due to space constraints. So a key metric to track is how many tinting machines the company has installed, as that shows how committed the dealers are. JSW Paints has 3,200 dealers with 3,000 machines installed, while Indigo Paints, a newly listed entrant has 10,000 dealers with 4,000 machines installed.

In October 2021, the business crossed ₹100 crore in monthly revenue for the first time. That makes it a little larger than Indigo Paints, which trades at a ₹10,000-crore valuation. The business on the decorative side is yet to break even, which Jindal says should happen when it crosses ₹100 crore in monthly revenue. The company recently abandoned a fundraising plan in favour of a ₹750 crore investment from JSW Steel.

While the paints business incubates, cement has come along much further. It recently raised ₹1,500 crore from Apollo Global and Synergy Fund in exchange for a 16.5 percent stake, valuing it at ₹9,000 crore. Here the strategy is clearer: Get to 25 MT from the present 15 MT and take the business to as close to the top five in the country.

Jindal admits that here, too, he had a steep learning curve. First, the business operated out of Hyderabad, which was not an ideal fit, as the Group headquarters were in Mumbai. Second, it was run like the steel business with a focus on keeping the plant operational for the maximum time. This did not work in the southern India market, as it was oversupplied and competitors used their time more on branding and marketing.

An additional problem was they were making slag-based cement. “The nuance is that the mason wants very high one-day strength so that he can pour and remove shuttering and move to the next project site. In our products, the initial strength was low and we were not spending any money in branding and educating the customer about slag cement versus fly ash-based cement,” says Jindal. Through research, the company has managed to get over the initial strength problem and the business is on its way to expanding capacity.

As ESG investing becomes more mainstay, investors are also comfortable investing in slag-based cement. “We were familiar and comfortable with the concept of steel slag-based cement, which makes it aligned with our ESG and economic impact values. The company has a considerably lower carbon footprint than traditional cement companies,” says Sudhir Maheshwari, managing partner at Synergy Capital who sits on the board of JSW Cement.

Last, there is the US steel business that has turned in an Ebidta profit of $105 million (₹820 crore) in the first half of this fiscal and is on track to report $250 million (₹1,925 crore) in Ebidta this year. Their business is well placed to supply to the oil and gas industry, and a new electric arc furnace at their Mingo Junction facility has made it possible for them to take advantage of high steel prices and sell hot-rolled coils in the US market.

Sport, which Jindal describes as a passion, takes up the balance of his time. Here, too, he has his hands full with part ownership of Delhi Capitals (cricket), Bengaluru FC (football) and Haryana Steelers (kabaddi). There is also the Inspire Institute of Sport, which trained, among others, Olympic gold medallist Neeraj Chopra. Jindal, who is passionate about fitness, still finds time to hit the gym and makes it a point to do one mountain trek every year. This February, he plans to scale a peak in Argentina.

Tweets by @forbesindia
Just get yourself out of bed, and you'll succeed: Forbes India Tycoons of Tomorrow Mithila Palkar
ZebPay's OTC-desk for high net worth investors