I was born to just play cricket: KL Rahul

He's among the foremost batters in international cricket. And he's striding ahead with his head firmly on his shoulders 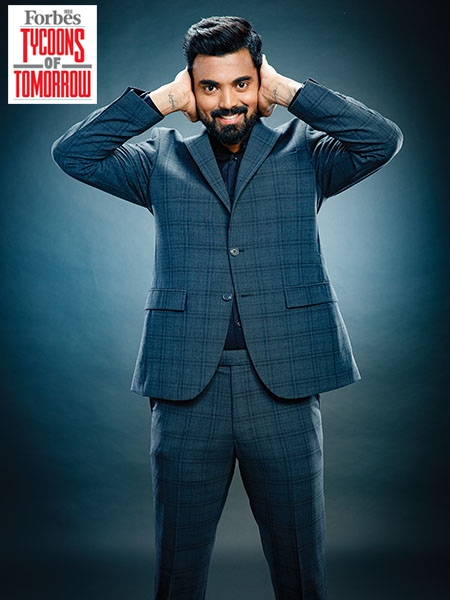 I have never really set goals for myself. I feel like that limits you or puts pressure on you. I like to take it one day at a time and work on being the best version of myself every day: KL Rahul, Cricketer
Image: Rahul Jhangiani; Styling: Zunaili Malik; Hair: Team Hakim Aalim (Leo)


KL Rahul was only two when he first held a bat. He would ask his father KN Lokesh, a professor and a cricket fan, to throw balls at him, and Rahul would run around the house hitting the ball and breaking things. Since then, he has loved holding the bat. “I think I was born to just play cricket,” says Rahul. “I have always been obsessed with the game since I was a child.”

Today, at 29, not much has changed. He loves the game as much, gets to play it for a living and is one of the classiest batters on the international circuit. He’s recently scored a Test century at Lord’s, considered the Mecca of cricket, won the Orange Cap for scoring the maximum number of runs in the 2020 Indian Premier League (IPL), and was the highest aggregate scorer for the team in India’s somewhat-lacklustre campaign in the recently-concluded T20 World Cup. Maybe it was a good thing that Rahul never considered a Plan B despite struggling to make his childhood dream come true.

Growing up in Mangalore—where cricket academies were few—Rahul found it tough to train at a good academy, even though he found a good coach in Samuel Jayaraj, who remains his mentor till now. During the weekdays, he would “finish school, sprint to the bus station which was about 800-900 m away, travel an hour for training from 5 pm to 7 pm, travel back for another hour, shower, eat and finish homework or study till bed time”, while on Friday nights, he would set off for the overnight journey to Bengaluru where he would play matches over the weekend. On Monday mornings, he would be back in Mangalore to resume his hectic study-play-repeat routine. 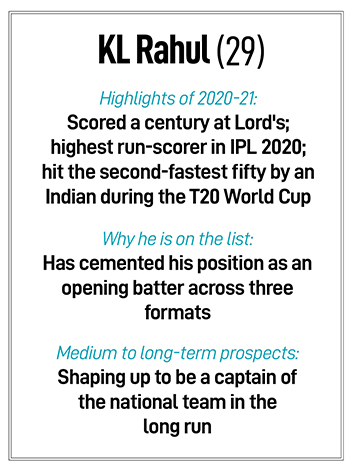 In 2010, Rahul was included in the India squad for the 2010 Under-19 World Cup, while in 2014, he made his Test debut at the Boxing Day Test against Australia. Ever since, he’s been marked out as one of the most promising batters.

Rahul is aware of the pressures of expectations that come with international cricket. “I have been that guy, who would be very disappointed with a bad innings or an injury,” he tells Forbes India over a Zoom conversation. “But over the years, I have matured. I have become more balanced—I don’t get overwhelmed with either wins or losses.”

Rahul also doesn’t obsess with the records he’s ratcheted along the way—including scoring a century on ODI debut, scoring fifties in seven consecutive Test innings in 2017, taking seven catches in an innings. “I honestly don’t know what records I’ve made or broken,” says Rahul, “I find a lot more joy in winning matches and creating special memories on the pitch.”

His most special memory, he says, “has to be my first Test hundred in Sydney against Australia. That will always be the best memory for me. I think it was the most under-pressure I have ever been. What a rollercoaster of emotions, in a single day”. 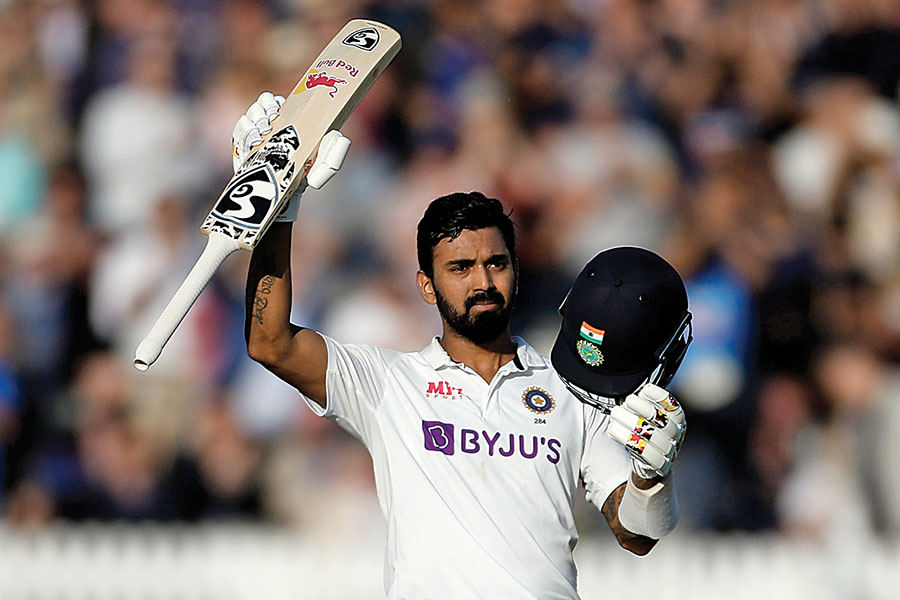 KL Rahul acknowledges the crowd after his century against England at Lord’s in August
Image: Paul Childs / Action Images via Reuters

In the IPL, Rahul transitioned from a cricketer to a leader, having captained Punjab Kings for the last two seasons (he’s parted ways with the franchise for the upcoming season). “As leader, I think I am still learning and growing with every game,” he says. “I am quite a reserved person, so for me the challenge has been to step out of my comfort zone and interact with players to bring out the best in them.”

Former Indian opener Wasim Jaffer, also the batting coach of Punjab Kings, believes Rahul has a sensible approach to the game and life. “Rahul has been playing for so long, he has a lot of experience and is quite mature. He doesn’t put too much pressure on himself. This kind of mentality works for him. He is one of those rare players who plays all three formats extremely well.” Often the load of captaincy can affect a cricketer’s game, but not with Rahul, says Jaffer.
His mental balance is often visible on the field with barely any show of emotions—be it scoring a century or a duck. “I am not calm. Let me tell you, no sportsperson is ever calm. Some people just manage to have a poker face,” laughs Rahul. “I am just happy and grateful to be doing what I love to do. When you put a lot of pressure on yourself, you tend to go overboard with emotions. I try to limit my expectations, which is probably why I don’t show a lot of it.”

Cricket has kept Rahul busy which is why he hasn’t had too many opportunities to explore other interests. Of late, he has been dabbling with his interest in fashion. In September, the cricketer launched his own athleisure brand, 1DER, in collaboration with Puma.

On setting long-term goals, Rahul says: “I have never really set goals for myself. I feel like that limits you or puts pressure on you. I like to take it one day at a time and work on being the best version of myself every day.”