Brothers Kairav and Saumya Engineer have taken forward their father's legacy at Astral, and have diversified into segments like adhesives, construction chemicals, and water tanks 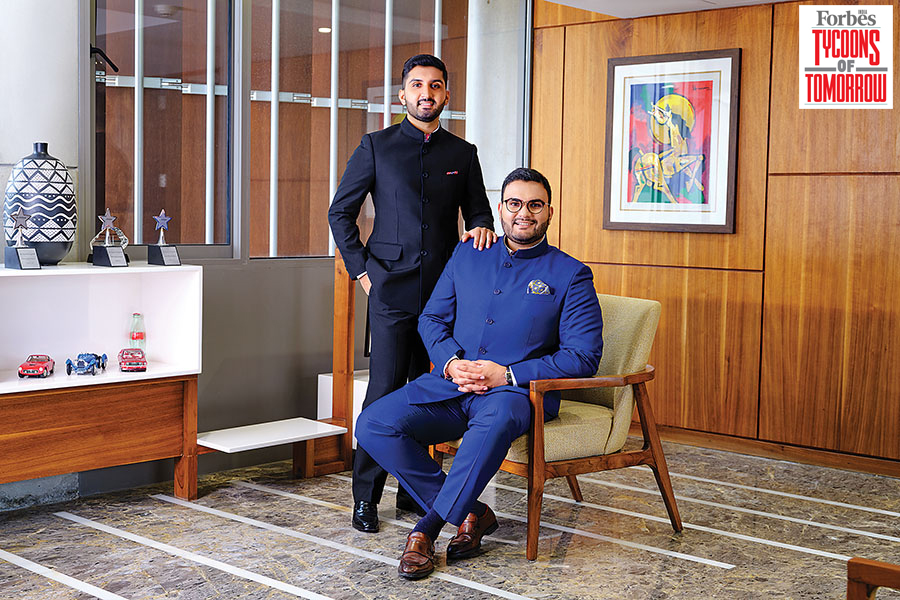 Kairav and Saumya Engineer have witnessed their father’s struggle in making Astral Pipes what it is today. Sandeep Engineer started his first venture Kairav Chemicals and eventually found his true calling with Astral. While his elder son Kairav, 33, planned to join the business eventually, younger son Saumya, 30, had such no plans. However, when it started growing, Saumya decided to complete their graduation and get into the business.

Four years after Astral was listed, Kairav joined in 2011. The company’s gross turnover then was ₹450 crore. Upon joining, Kairav soon realised the business and brand were controlled by the distributors, and that they lacked the power they should’ve had as manufacturers. “That’s when I thought, why not create a brand out of a product like pipes and get them noticed by end-users like plumbers and homeowners to create demand,” says Kairav, who is now vice president, business development, but handles the pipes side of Astral’s business. This shift in strategy helped as the company witnessed immense growth over the next decade.

“The idea to use advertising and build a brand was entirely Kairav’s. He convinced his father that this was the path to take. Sandeepbhai was hesitant at first since nobody in the industry had ever done anything like this,” says Miten Mehta, founder-promoter and fund manager for Bellwether Capital, an investor in Astral. Though Engineer was not keen on spending money on marketing, he went ahead with it. “The result was astounding. It established Astral as a premium brand in the piping segment,” says Kairav. 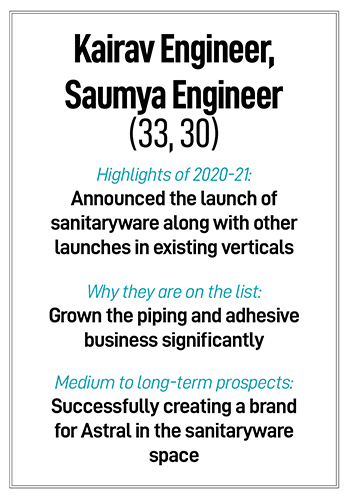 When younger brother Saumya joined the business in 2014, the company was looking at diversifying into other segments like adhesives, sealants and construction chemicals. In 2014, Astral acquired for ₹44 crore an 80 percent stake in the British adhesive company Seal It Services. It followed it up with a buyout of a 76 percent equity stake in the Kanpur-based Resinova Chemie for ₹212.8 crore. It gave Astral brand ResiQuick, an instant adhesive. “When I came back after completing my under-graduation, I spent the first year transitioning, and understanding the businesses, particularly adhesives,” recounts Saumya, vice president, who looks after the adhesives side of the business. He feels it was necessary for him to understand the market first since their forte was pipes, and adhesives already had large players in the market.

“Saumya’s start was not very rosy. The acquisition of Resinova was a trial by fire; it came with its challenges and took over two years to sort out several integration issues.  He has learnt from that and has now settled down to help grow adhesives,” adds Mehta.

Over the years, Astral has expanded from pipes to adhesives, water tanks and soon, sanitaryware and faucets. “Despite the expansion, we are still innovating and expanding within our core. We don’t want to lose our forte, because it’s our strength,” adds Kairav.

In 2018-19, the company started an Astral Loyalty programme, where they enroll plumbers and dealers. That’s when they realised that almost 40 percent of their dealers—who are responsible for 65-70 percent of Astral’s sale—sold sanitaryware and faucets. “We aim to be a complete building materials company and wanted to expand to a category that was ‘front of the wall’. So far, all our products—like pipes or adhesives—are used, but no consumer knows what brand has been used,” explains Kairav. Hence, the decision to move to sanitaryware and faucets. Though the market is crowded, the Engineers are confident it is big enough to accommodate multiple players. Astral will be launching its products in the coming year.

Unlike a lot of businesses, Astral did well despite the pandemic. “A lot of the smaller-level manufacturers shut shop because they couldn’t afford the increasing raw material costs. So all the big organised players ended up getting their sales. Second, construction has picked up quite a bit too,” says Kairav.

The company started as a family-run business, but the Engineers are now turning it into a semi-professional one. Both Kairav and Saumya admit their father has been a guiding force. “Earlier,” says Saumya, “taking decisions was a lot tougher without dad’s go-ahead because you were scared to fail. Over the years, I have learnt to be far more confident in my decision making.” Some qualities we have learnt from our dad, says Saumya, include “risk-taking ability, trusting people and the passion to constantly innovate”.