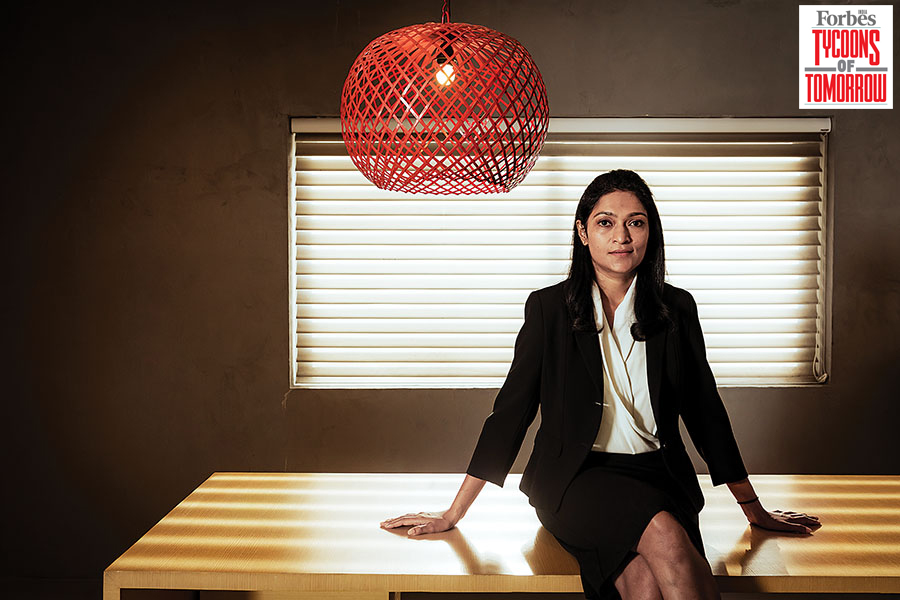 Mahima Datla has always been a fighter at heart.

Calm, composed and with a sense of purpose, Datla has been pushing her family’s 73-year-old pharmaceutical company into newer frontiers over the past few years. Her Hyderabad-headquartered company, Biological E, had jumped into the fray to develop Covid-19 vaccines in India at a time when the world was looking for answers to combat the coronavirus.

Biological E is awaiting clearance for its Corbevax vaccine, developed in partnership with Baylor College of Medicine in Houston, US, and American company Dynavax Technologies.

“It has been something of a roller coaster ride for the past few years,” Datla, 44, tells Forbes India. “This is a once-in-a-lifetime moment and we had been preparing to live up to that challenge. The only reason we could move quickly was because of the investments that we had been making for over a decade.”

Considering it is a vaccine with massive potential, especially now that the Omicron variant has found its way into India, the government has made an advance payment of ₹1,500 crore and announced 30 crore doses of Corbevax by December. The government, in a statement in June, had also announced that the vaccine doses will be manufactured and stockpiled by Biological E from August to December 2021. 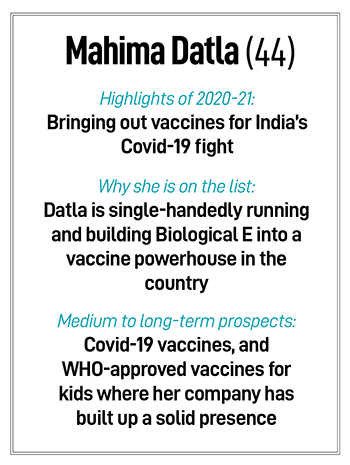 “My team has been working non-stop and much of the credit should go to them for everything, especially during the lockdown,” Datla says. “We did lose some people during the crisis, and it was demoralising. That gave us all the more reason to go out and do our best.”

Datla took over as the managing director of the company after the death of her father, Vijay Kumar Datla, in 2013. Since she joined the company in 2001, she has been strengthening the company’s presence in vaccines, which now includes seven World Health Organization pre-qualified vaccines, including for tetanus, measles and rubella, and pentavalent vaccines, in addition to polyvalent snake antivenom. The company supplies vaccines to more than 100 countries and has exported more than 2 billion (200 crore) doses in the last decade. Biological E claims it is the world’s largest producer of tetanus vaccine.

“Kids should not be suffering for the want of vaccines, more so during these times,” Datla says. In June 2021, Biological E entered into a licensing agreement with Providence Therapeutics Holdings to manufacture the Canadian company’s mRNA Covid-19 vaccine in India. “I think mRNA vaccine is an area that can help with meeting the demands of such a large population.”

Over the last decade, the company has also been strengthening its formulations and injectables business. Its branded formulations business includes Bethadoxin, a multivitamin syrup, and Heparin. “While the focus for the last 10 years has been on vaccines, what is lesser known is that diversified significantly by entering the regulated markets,” Datla says. “We intend to commercialise a range of injectable products, and our facility has received USFDA [US Food and Drug Administration] approval as well.”

Yet, joining the family business was never part of Datla’s plan. “I did not intend to work here,” she had told Forbes India earlier. “I did not even have a clue about what our business was, because it was not a preset idea that I would graduate and join it. I stayed back because it would look good on my resume.” While vaccines contribute about 80 percent to Biological E’s revenues, Datla sees a future where the injectables business will eventually contribute about 50 percent, and vaccines the rest.

Considering the recent success of companies that have tapped the bourses for their expansion plans, does Datla see a future for her in going public? “Our business is capital intensive,” she says. “The business is price-sensitive, especially since the government is a big buyer. And there can be drastic reductions. Even if the business is profitable, investors will look on a quarterly basis, and that may not show the true picture of the performance. So, that will be quite a task.”

Datla has weathered many storms, and is only getting started now.

Tweets by @forbesindia
Best of 2021 Ep. 7: Magnus Ewerbring at Ericsson on the potential for 5G to usher in a new wave of innovation
India big investment hub for Trend Micro, invests in local Data Centers