Anish Achuthan, his wife Mabel Chacko, and his brother Ajeesh Achuthan, have built Open into a $600 million enterprise, with a strong focus on work culture with Open 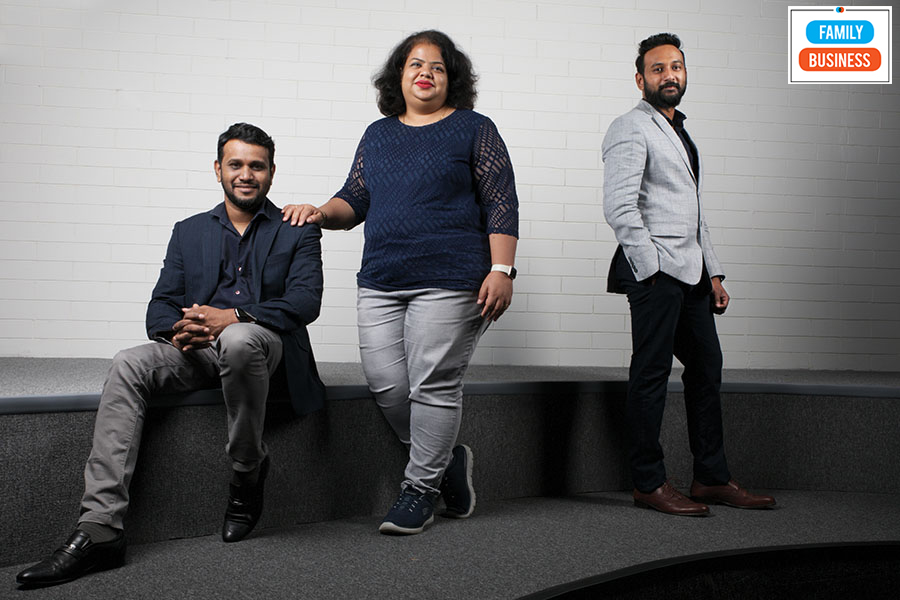 After all, the 39-year-old had founded four startups before his latest one, Open, a soonicorn valued at $200 million and expected to become a unicorn later this year, if everything goes according to plan. “Many a time, getting the right co-founder is almost like a marriage,” Achuthan tells Forbes India. “Chances are that you get one in a thousand right.”

Achuthan , of course, can only thank his stars. He didn’t have to go very far when it came to finding the right co-founders. At Open, he has three, two of whom are his closest relatives: Mabel Chacko, the COO and co-founder of Open, is Achuthan’s wife, while Ajeesh Achutan, the CTO, is his brother. A fourth co-founder, Deena Jacob, is CFO.

“Whether it is family or not, it is always important to get people with the same kind of frequency, and those who believe in the larger vision,” Achuthan says. “Just because it happened in my case doesn’t mean that it can happen in all families. Because there are disagreements within families also.”

Achuthan and his team came together to set up Open in 2017, which provides a dashboard, both on desktop and mobile, where users—mostly small and medium enterprises—can monitor their expenses, seek loans, collect payments, and manage their financial operations, thereby automating bookkeeping. It also helps provide insights on cash flows, apart from automated accounting, unified banking, and integrated payments services.

“We have around 1.3 million small businesses, and continue to be the market leader,” Achuthan says. “The company processes annualised transactions of around $20 billion.” The number of accounts per month has grown to around 75,000, he adds. Earlier this year, Open acquired Optobizz, a Goods and Services Tax (GST) and financial automation startup, for $5 million in a stock-plus-cash deal.

“The industry has changed a lot, and a lot of investment is going into this market,” Achuthan says. “That has led to infrastructure-led businesses, like embedded finance platforms.” Open is expected to close another round of funding soon, after having raised between $45 million and $50 million from investors like Tiger Global, 3one4 Capital, Speedinvest, and Better Capital, among others, in 2019. The upcoming round is expected to see $100 million investments from Temasek, Google, SBI Holdings, Tiger Global and 3one4 Capital, which will value the company at $600 million.

Much of Open’s success is due to its early foray. Neobanks are transactional platforms for merchants, and players in the segment include Jupiter, RazorpayX, and Niyo. Open’s co-founders started the company while working at PayU.

But even before that, the entrepreneurial bug had bitten Achuthan. He co-founded his first startup iFuturz Wireless in 2001, which was into mobile value-added services and was later sold to Asianet. In 2007, he founded Cashnxt, which was a plug-and-play mobile payment and financial inclusion platform for semi-urban and rural markets. He moved on to build Neartivity Wireless in 2009, an NFC-based payment processing platform. In 2013, he co-founded Zwitch, which was India’s first developer-focussed payment platform, later acquired by Citrus Payments. During Cashnxt, Zwitch, and Neartivity, Achuthan was joined by Chacko, who was also the co-founder of these companies. The duo got married in 2011.

“So far, all my startups have been with Anish,” Chacko says. “I was trying to build a biometric payment interface to be deployed across kirana stores, and was struggling a lot with technology. That’s when I read about Anish, who was doing similar things and we connected.” The two then went on to start three startups together. By November 2012, Achuthan’s brother Ajeesh joined them in setting up Zwitch.

After Citrus Payments acquired Zwitch, the trio worked together at PayU India before venturing out to start Open. At Citrus Payments and at PayU, they had witnessed the troubles of small businesses, particularly in tracking their income and expenses. Open is Asia’s first neo-banking platform. It works on a software-as-a-service (SaaS) model, which includes both free and premium features. About 80 percent of the platform’s services are free, while the premium features are available through annual subscription packages.

“We were dealing with a lot of entrepreneurs, and one thing we realised is that business bank is broken for them,” Achuthan says. “You have a current account, you have separate tools for invoicing, separate accounting, and they don’t talk to each other. So that’s when we thought of building a digital bank that integrates everything.” PayU’s founders, Amrish Rau and Jitendra Gupta, also invested in the venture.

“There are good parts and bad parts of being a family. For us, the good part was that, whatever bad that could happen in a family-run show happened probably seven to eight years ago,” Achuthan says. “When you are husband and wife or brothers you end up thinking about business all the while.  I mean, even now it happens, but then sometimes decisions are taken in the bedroom. Say you don’t like a guy, and we say ‘let’s fire that guy’.”

“ We consciously ensured that there is a next set of leaders who can take charge.”
Anish Achuthan, founder, Open

But having spent time across professional organisations, the trio also drew boundaries. “For people working with us, they don’t differentiate,” Chacko says. “The right set of investors also see that we were co-founders before we got married. I’ve had investors who would ask what would happen if Anish and I get a divorce. All that is changing now, as the investment scene opens up.”

The trio has tried to ensure the work culture isn’t affected, especially with three close-knit family members at the top. “After 30 employees became 50 employees, we consciously ensured that there is a next set of leaders who can take charge,” Achuthan says. “If a few people call the shots, that’s when your culture will always get screwed at some point.”

Open has a little over 400 employees. “Each of us has the freedom to make decisions without anyone overstepping, and the sync we have internally helps out,” Chacko says. “This gives us a lot of comfort.”

Tweets by @forbesindia
No more apologies: Inside Facebook's push to defend its image
How two IITians shunned the herd mentality to sell cattle online