After disrupting the alcoholic beverages market with his craft beer, the maker of Bira 91 beer now plans to make it a Rs 1,000-crore brand in 36 months 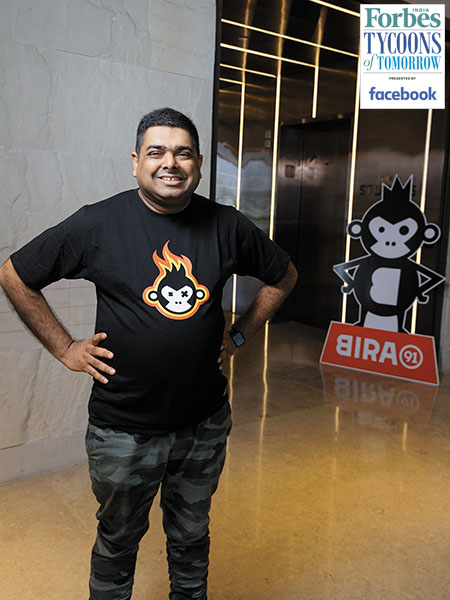 Ankur Jain says what looks simple today was not easy to pull off in 2015
Image: Madhu Kapparath
In 2015, when Ankur Jain, a computer science graduate from Chicago, revealed his audacious plan to liquor distributors to roll out an indigenous craft beer brand, the reaction was near unanimous: “You have lost your mind!” Beer, after all, is a sector where a handful of powerful brands—mostly global—rule the roost.

Differentiation and innovation, too, are alien to this sector, dominated as it is by the strong version of the brew.
Jain, though, was convinced that it was precisely these attributes that made beer ripe for disruption. Three years on, the numbers speak for the phenomenal success of Bira 91.

From ₹32 crore in fiscal 2017, revenue of B9 Beverages—the maker of the craft beer brand Bira 91—surged over five times to ₹165 crore a year later. This may just be the beginning. From its current capacity of over 300,000 barrels, the company plans to leapfrog its volume to 2.7 million over the next two years. “We now have an over 15 percent value share in the beer market in New Delhi, which is India’s biggest,” claims Jain, founder of B9 Beverages. “The target now is to become a ₹1,000-crore brand in 36 months,” he adds. “And it’s a realistic target.”

“ “New brands can be created as consumers love innovation. We have the potential to become the brand of choice for Indians... we have to stay fresh as a brand and product.”

“New brands can be created as consumers love innovation,” says Jain, who honed his ‘craft’ in alcoholic beverages since 2009. It was then that he started importing and distributing premium craft beer brands from Belgium, Germany and the US through his company Cerana Beverages.

In June 2014, Jain had raised seed funding, before launching Bira 91 the following year. “We have the potential to become the brand of choice for Indians,” he says.
Click here for the full Tycoons of Tomorrow list

Jain’s success, reckon experts, was against all odds. “What looks simple today was not easy to pull off in 2015,” contends Jaspal Sabharwal, a private equity veteran. Jain, he lets on, placed his bet on the rising millennials of India, and it involved introducing youngsters to craft beer in a simplest possible manner. The challenge, though, would be to maintain its differentiation. As beverage companies expand onto others’ turf in search of new ideas and growth, the lines between the companies and their products are fading. “Bira will have to keep a tight circle on its startup DNA to protect and grow its position,” adds Sabharwal.

Jain, for his part, is aware of the task. “We have to stay fresh for the consumer as a brand and product,” he says.

Ask Jain for his secret craft of success and he comes up with an instant brew: A mix of listening to people and doing things in a unique way.

Tweets by @forbesindia
Girish Mathrubootham: The Sa(a)Sy entrepreneur
Radha Kapoor Khanna: All in the family (office)