PE and VCs deployed $47.5 billion in Indian companies while exits hit a five-year low at $6 billion 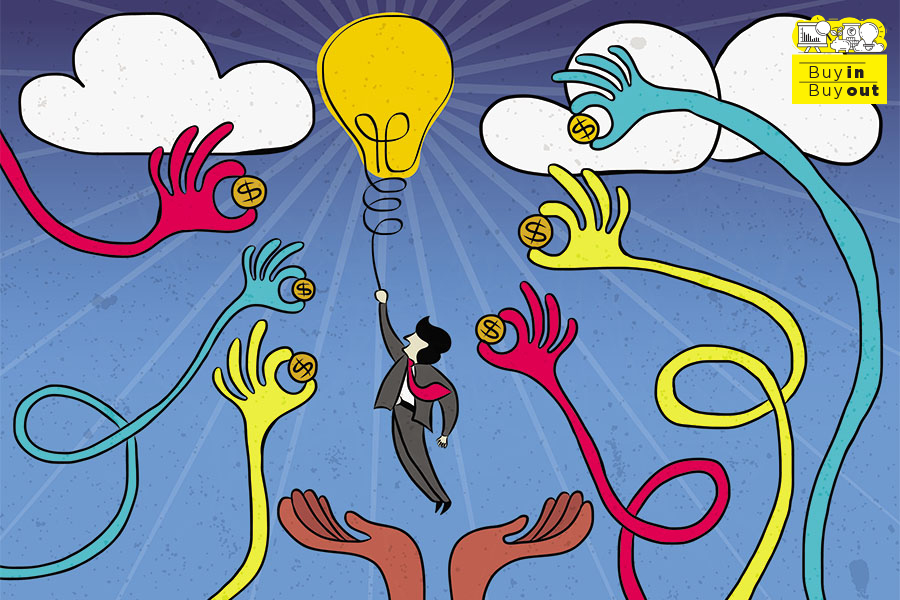 The Indian private equity (PE) and venture capital (VC) ecosystem had a year like never before in 2020. According to data by VCCEdge and EY analysis, investments by these investors stood at $47.5 billion from January to December—a record year for investments compared to $47.3 billion for the same period in 2019.

Though the number looks rosy, one cannot escape that, of this, $17.298 billion was raised by Reliance Group’s various entities, especially its technology arm Jio Platforms Ltd [Reliance Industries is the owner of Network 18, the publisher of Forbes India]. The Group alone took home 36 percent of the total capital raised by companies in India. It was also the first time that any group globally managed to raise such a volume of capital during the pandemic.

This year’s largest cheque was signed by global PE firm KKR when it deployed $1.5 billion in Jio Platforms for acquiring a 2.32 percent stake. It also invested $754 million in Reliance Retail Ventures for a 1.28 percent stake. Other large investors who deployed in Reliance Group companies include Public Investment Fund of Saudi Arabia, Silver Lake Management, Mubadala Investment Company, Singapore’s sovereign fund GIC, among others.

If one looks at the Indian PE-VC ecosystem, one or two deals skew the data every year. In 2020, it is left with deals worth $37.33 billion, which looks lot less compared to last year. This includes real estate and infrastructure investments too. 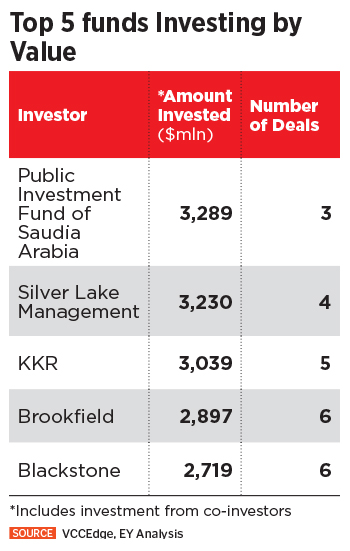 Among the sectors which lagged this year is real estate and infrastructure. During CY20, investors deployed $10.17 billion in this sector across 61 deals whereas for CY19, global and Indian funds put together had invested $19.88 billion across 121 deals. There has been a significant drop of 49 percent in 2020. Towards the end of the year, deals picked up as global investors like Blackstone Group and Brookfield Asset Management acquired commercial assets in the country as developers sold some key properties to deleverage their balance sheets. Brookfield acquired Bengaluru-based RMZ Corp’s 12.5 million sq ft assets for nearly $2 billion.

“Large investments in commercial real estate came back from large global investors towards the year-end. One of the reasons behind this slightly contrarian and bullish view on office space is the thesis that Indian technology companies will gain enough from the extra spend global enterprises will do on going digital. Commercial real estate assets in Bengaluru and Hyderabad largely cater to the tech sector and local industry participants do not expect vacancies to go up by much in the coming months,” says Vivek Soni, partner and national leader for private equity at EY.

Soni explains the recent quantitative easing unleashed by the US and European Central banks to combat Covid-induced economic turbulence in their home markets has only exacerbated this phenomenon and he expects an increase in allocation of global capital towards emerging markets in the hunt for yield.

The impact of the pandemic was felt across the investing ecosystem, especially from March to June when most fund managers decided to put a hold on their investments. As India got accustomed to the new normal of online delivery of food, grocery, medicines, tele-health and online education, investors started doing new deals and help their existing portfolio companies.

The other large deals that happened during 2020 include Blackstone’s acquisition of Piramal Glass for nearly $1 billion in December. “If we look at sector-wise allocation, this is the first time that pharmaceuticals and chemicals have managed to drive up deal values in India. Investors have deployed capital in pharma and technology, especially software as a service, companies,” Soni adds.

The three deals in the top 10 (ex-Reliance) are in the pharmaceuticals space. It includes New Mountain Capital’s acquisition of Aurobindo Pharma’s US unit for $550 million. KKR also struck a control deal to acquire 65 percent in listed firm JB Chemicals for $496 million followed by Carlyle Investment Management which invested $490 million in Piramal Pharma to acquire 20 percent.

With the spurt in deals, especially led by VC funds, India managed to get 11 unicorns during the year; they included Pine Labs, First Cry and Nykaa, among others.

“Due to the uncertain and tepid economic environment, valuation of some of the assets dropped significantly. This presents PEs and VCs with an opportunity to invest in high potential assets at compelling prices. However, we also believe that due diligence risk assessment will assume greater importance in 2021,” says Amit Mehta, principal fund manager-private equity at IIFL AMC.

The year tested several business models and taught entrepreneurs that they need to track cash flows and profitability, not vanity metrics. “Even before the lessons could sink in, we witnessed bubble forming in some segments,” says Mehta, who points out that one of the reasons for the same is the tsunami of liquidity in the ecosystem.

Exits too took a backseat, touching a five-year low in 2020. Fund managers managed to return $6 billion to their investors across 146 deals. While exits have been coming down over the last three years, the number hasn’t been this low. In 2019, fund managers had pocketed $11 billion in exits by selling stakes in 157 companies. A cursory look at the number of deals indicates a drop in valuation.

The largest exit was clocked by Carlyle as it sold its 8.6 percent stake in SBI Cards during the initial public offering (IPO) and managed to make $1 billion. Other PE firms which managed to exit some investments include Blackstone’s partial stake sale in Embassy Reit and in packaging firm Essel Propack Ltd. In the tech space, the two largest exits include Nexus India Capital exiting Paysense Services India for $293 million and Warburg Pincus’s secondary deal in Ecom Express for $250 million.

“Exits were impacted negatively as the rising uncertainty made it difficult for PE/VC investors to get the valuations they would have liked. It made sense for them to work with their portfolio companies to mitigate the negative impact of this Black Swan event and postpone exits to better times. Now, with reduced uncertainty, a better-than-expected demand revival and uplift in the mid-cap and small-cap indices, we expect a significant increase in PE/VC backed IPO’s and secondary transactions.,” says Soni.