How Samosa Singh in South India and Burger Singh in North India are trying to carve a niche in the cluttered food market with their desi offerings. Will Singhs be King? 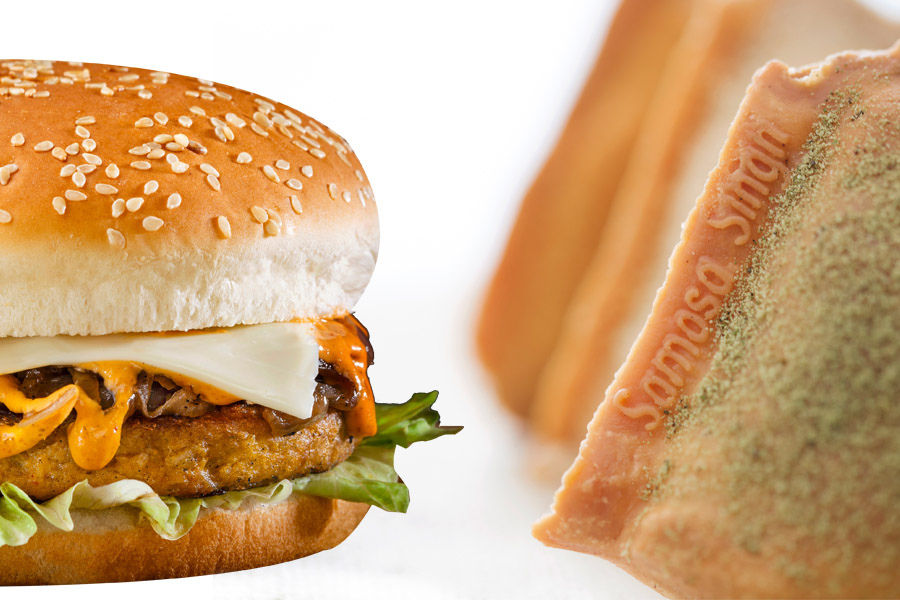 Nidhi Singh doesn’t believe in tried and tested formulas, especially when it comes to food. So when she took the entrepreneurial plunge along with her husband, by starting ‘Samosa Singh’ in February 2016, she went for the daring and unconventional path.

The audacious move was not only to reinvent the samosa--the king of Indian snacks--by offering it in multiple variants, but also to convert the ubiquitous samosa into a ‘brand.’ Singh wanted to take the legacy of the humble samosas beyond potatoes.

Most of the new avatars created by Singh were blasphemous for the purists: Kadai paneer samosa, shahi kofta samosa, paneer tikka samosa, murg makhani samosa and dry fruit dal samosa. ‘Who says only aloo goes into a samosa,’ was Samosa Singh’s tagline.

“The idea was to reinvent the humble samosa and present it to the customers in a very different and innovative way,” she said. Apart from playing around with the contents of the traditional samosa, Singh also took a risk by opening the first outlet in Bengaluru, Karnataka, the land of idlis and dosas.

The risk paid off. From selling 6,000 units of samosas in the initial months, the numbers have now jumped to 3.6 lakh units per month. Priced between Rs 15 and Rs 50, Samosa Singh has sold over 50 lakh samosas in Bengaluru.

Backed by early-stage VC fund Fireside Ventures, the fledgling startup also opened up outlets in Hyderabad and has plans to enter Pune and Mumbai soon. “In the beginning, 80 percent of our sales came from the aloo [tradional potato] variant. But now only 30 percent is aaloo [traditional variant]; the rest are other flavours,” claims Singh.

Kanwaljit Singh, managing partner at Fireside Ventures, says that Samosa Singh has the potential to convert the generic food product into a brand. “Samosa Singh can be a great cusp of the traditional favorite in a modern avatar,” says Singh, whose fund invests in consumer brands across food and beverages, personal care and home products such as Yoga Bar, Bombay Shaving Company and Frog Bikes.

What makes the brand brand unique, Singh lets on, is a couple of things. First, it provides a lot of choice by coming up with innovative recipes. Second, its triangle interlocking shape does not allow oil to seep inside, thereby making the samosa healthier and lighter. Third, their proprietary technology ensures the samosas stay crispy even when stored for long hours. “These propositions will allow Samosa Singh to break through from the clutter and build an exciting brand,” says Singh.

Though Samosa Singh has made an impressive beginning, brand experts say that branding the samosa can be a herculean task. “The samosa is a product which, at best, can be a quasi brand, but not a brand,” says brand strategist Harish Bijoor. There are some products, Bijoor said, that stay best in its pure form. “One can’t have samosa without aloo,” he adds.

Singh, for her part, is confident. “We are re-inventing the samosa and want our customers to experience the change in every bite.”

Kabir Jeet Singh has always defied conventions. In 2007, Singh used to work at a local burger joint in the UK, while pursuing his MBA from the University of Birmingham. While working the night shifts, Singh used to blend Indian spices, procured from a neighbouring store, to spice up the “bland” burger.

“The idea was to spice up the burger,” recalls Singh, whose desi innovation in a foreign land became a massive hit, and he got the nickname, ‘Burger Singh.’

“Kabir was a difficult name for them to pronounce,” he grins.

Cut to 2014. Singh launched his own burger brand—Burger Singh—with his signature touch.

The Udta Punjab burger, Bunty Pappeh da aloo burger, Chotu Singh burger, Bihari gosht burger and United States of Punjab (USP) burger were only some of the signature fusion burgers he rolled out. Counting Rahul Singh of Beer Café as one of the angel investors, Burger Singh raised an angel round of over half a million dollars in September 2015. Over the next twelve months, the same set of investors pumped in another half a million, taking the total fund raise to over $1 million.

“We now have over 20-odd outlets and will open another 30 by the end of the current fiscal. And we are profitable,” claims Singh, who devised two ingenious strategies to make his QSR brand stand out. The market he was operating in, was a cluttered one, dominated by McDonald’s and Kentucky Fried Chicken (KFC). To differentiate his products, he used a unique brand positioning and business model.

Singh decided not to spread his brand too thin. So, the area of focus was largely confined to New Delhi and NCR. Apart from the quality of the fusion burgers--something that even multi-national biggies were not able to crack in spite of their local innovations--Singh did a Domino’s, by taking an online-first approach. When others were luring consumers to their outlets, Singh took the gambit of pushing his fare through online, thereby keeping his capital expenditures low.

“Our burger is bigger than what is there in the market, and is Indianised in look, taste and feel” Singh says, adding that 64 percent of the orders come by delivery.

Burger Singh, according to marketing experts, has found a sweet spot in delivery and localising the foreign product. Only adding paneer [cottage cheese] or potato to a burger is not localisation, Ashita Aggarwal, marketing professor at SP Jain Institute of Management and Research, says.

“Burger Singh made the product desi in look, feel and taste,” she says. By catering to the local palate, the burger brand was able to carve a niche in the market dominated by the American giants.

“Quirky name, frugal marketing, and desi taste turned out to be its biggest USPs,” she says, adding a word of caution. The brand, she lets on, needs to step on the marketing and advertising gas if it wants to play the scale game. QSR is all about scale. “One can either be present in pockets but then the danger of getting sidelined is huge,” Aggarwal said.

Can Burger Singh step up its game? Its USP after all is, to survive against odds.