One of the most promising technologies is artificial intelligence: The use of computers to perform tasks which normally require human intelligence 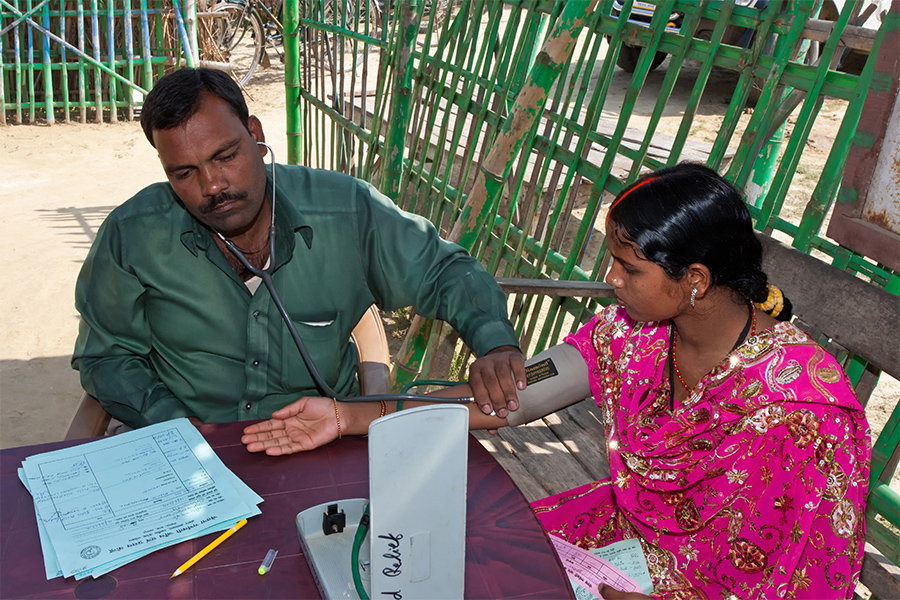 Artificial Intelligence cannot replace skilled doctors but it can enhance the capabilities of health workers and allow overstretched doctors to serve more patients.
Image: Shutterstock
Many of the worst problems of developing countries in health, education and financial inclusion are caused by unavailability of skilled professionals: doctors, teachers and bank officers, particularly in rural areas. There are obvious reasons for this shortage: it’s costly to train experts and they naturally prefer the highest-paying jobs in cities. Furthermore, the countryside has other scarcities in infrastructure, equipment and documentation which make it difficult to deliver amenities.
In recent decades, information and communication technology has become a powerful tool to deliver affordable facilities to the poor. The rapidly falling cost of computing hardware has allowed developing countries to leapfrog older technology, for example with mobile telephony and web-enabled smartphones. These devices not only allow poor people to communicate and carry out transactions but also create digital trails which can enable other IT-based services. One of the most promising technologies is artificial intelligence (AI): the use of computers to perform tasks which normally require human intelligence.
AI has swiftly progressed in the last five years with the help of graphical processing units, previously used mainly for video games, which have given new life to decades-old computer science techniques like deep learning. This progress has mainly come in narrow AI, where machines perform a specific task, like playing chess or labelling images, at expert levels rather than strong AI where machines can mirror the full range of human capabilities.
For example, in 2015, AlphaGo, a computer program, beat Lee Sedol one of the top Go players. Remarkably, AlphaGo Zero, a newer version, improved so rapidly that in 2017 it beat the original AlphaGo 100-0. Because of its complexity, the game of Go has long been considered a major challenge for AI; now in a few years machines have progressed so fast that it is unlikely a human player will ever beat a top AI again.
How can this dramatic progress be harnessed to solve development problems? In healthcare, AI can deliver better health services to areas which lack decent doctors. The technology cannot replace skilled doctors but it can enhance the capabilities of health workers and allow overstretched doctors to serve more patients. For example, AI could be used to analyse chest x-rays to identify patients with tuberculosis or predict infectious disease outbreaks by analysing social media feeds and weather data.
In education, edtech companies like Byju’s are using AI to deliver personalised learning which adapts itself to the pace of the student and adjusts the difficulty according to their answers. Another promising technology is voice interaction, for example, to teach students English. Randomised controlled trials have found that computer-aided interventions are highly effective at improving learning outcomes and also cost-effective.
In finance, there has already been dramatic progress in digital payments through services like M-Pesa. AI can improve access to more complicated services like loans and wealth management. Companies can use data from social media, phone records, e-commerce transactions etc. to make loans available more widely. Robo-advisers can offer customised investment advice to a large number of users at a low cost.
Other promising areas are governance where AI could detect power theft and tax evasion. In addition, agriculture where AI could deliver tailor-made advice to farmers to increase their crop yields. With its large software industry, existing IT platforms like Aadhaar and a rapidly growing digital population with 300 million smartphone users and 450 million internet users, India is in a good position to exploit these innovations.
Furthermore, the typical cost structure of IT solutions, with relatively high fixed costs for research and software development and comparatively low marginal costs to scale up, also makes sense in a large country like India with a huge population of patients and students. Finally, the sheer severity of rural India’s problems means that AI solutions are more likely to deliver value. They don’t have to beat world-class doctors and teachers but rather the patchwork systems currently available in rural areas.
What does the government need to do to harness the long-term power of AI? First, it needs to fund AI research applied to development problems. AI researchers are a scarce commodity, heavily in demand by companies like Google and Facebook. It will require a major collaboration between governments, universities, NGOs and multilateral institutions to ensure a critical mass of AI research for development.
Secondly, it needs to develop a multi-dimensional regulatory framework where AI solutions can be tested and deployed in a way that preserves competition and privacy. Testing can be done through a ‘regulatory sandbox’ where solutions are tested on a small scale and for a limited time, to make sure they are effective and safe. Once they are ready to be deployed, there needs to be a framework where the relevant data, which may be dispersed across multiple government departments and corporate databases, is pooled together and made available to different stakeholders. Finally, there is a need for a robust system to protect the privacy of individuals.
AI may well become the dominant technological force of the century, with a potential to transform the systems that underpin the global economy. It undoubtedly imposes costs on some, for example IT employees who lose their jobs to automation. However with the right policies, the long-term benefits are enormous, and likely to exceed the costs.
Prof. N. Sawaikar is core faculty in Economics at the Prin L.N. Welingkar Institute of Management Development and Research. His interests include the technology sector and its role in economic development.