Instead of taking on banks or merchants directly, the founders of payments solutions firm BillDesk saw an opportunity in partnering them for growth 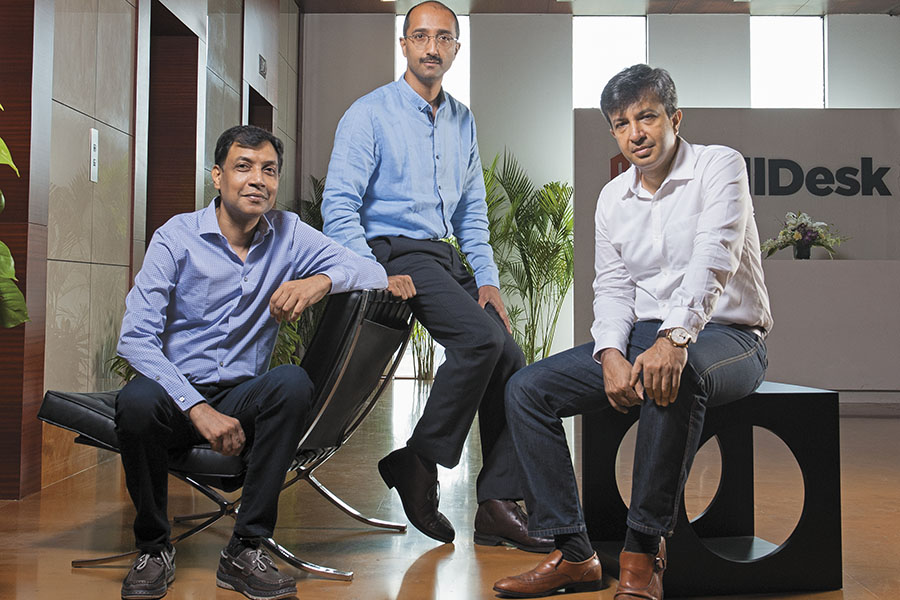 As more and more Indians login to order goods online, the Indian ecommerce scene has become a gold rush of sorts for online retailers. But MN Srinivasu, 49, is, so to speak, in the business of selling the shovels during the gold rush.

His company BillDesk, which he started along with Ajay Kaushal and Karthik Ganapathy in 2000, provides the back-end infrastructure, helping e-tailers, among other businesses, accept online payments from customers, irrespective of the mode of payment they choose—be it credit or debit cards, UPI or e-wallets.

The payments acceptance provider, whose customers include Amazon India, expects to cross ₹1,000 crore in revenues this fiscal year, according to Srinivasu.

Investors aren’t complaining about the company’s low profile, given its growth trajectory and future potential. “For us, BillDesk is a bet on the rising trend of digital payments across all P2M (person-to-merchant) cases,” says Dhiraj Poddar, country head, India, at TA Associates Advisory. “Its biggest achievement has been to aid the evolution of the payments ecosystem in the country. It has worked tirelessly with merchants, banks and regulators to enable online payments.”

The opportunity for the business is huge, Poddar adds, as penetration of online payments is still in single-digits. It is focussed on the right market segments—banks, financial services, utilities, retail, ecommerce and government—and investors are optimistic about how big the business can become over time, Poddar tells Forbes India.

BillDesk’s current annual payments volume is around $50 billion (or ₹3.2 lakh crore) and is growing at an annual rate of about 40 percent. The volumes translated into revenues of ₹790 crore in FY17. (BillDesk takes a commission from the merchants and utilities it serves and none from end-customers). The company has been profitable for over a decade, though it does not reveal exact figures. 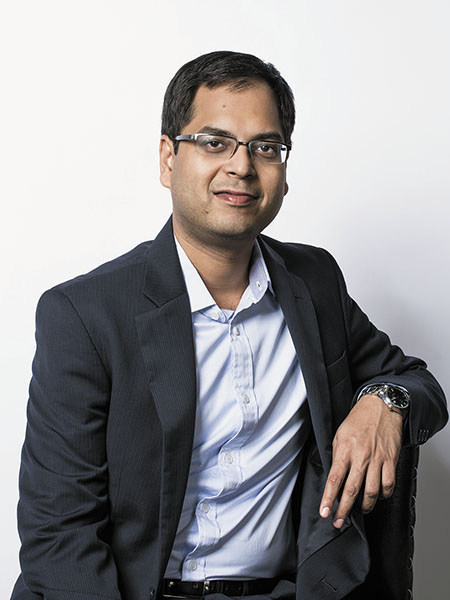 Even before demonetisation—announced on November 8, 2016—which triggered an interest in going cashless, Srinivasu and his co-founders had built BillDesk into India’s largest payments acceptance provider connecting merchants and utilities with banks and were looking at adjacent diversifications.

BillDesk seized an opportunity in FY16 when it acquired Mumbai-based Loylty Rewardz Management, India’s largest loyalty business company. Think of Loylty Rewardz as the BillDesk for loyalty solutions. When swiping your debit or credit card at a retailer, say Big Bazaar, the bank rewards you with loyalty points—the entire exercise of crediting the right amount of loyalty points to each customer is managed by Loylty Rewardz.

The combined platform of BillDesk and Loylty Rewardz helps banks and merchants as they look to expedite the process of shifting customers to digital transactions. BillDesk has since invested a further ₹100 crore in Loylty Rewardz.

Srinivasu is an MBA from the Indian Institute of Management, Ahmedabad. The commerce graduate had spent nearly a decade at ITC before joining the consulting firm Arthur Andersen in 1999 in Mumbai, where he met Kaushal, 49, and Ganapathy, 44. They were part of the business consulting service line, focussed on financial services.

This was a period when banking was at the cusp of a paradigm shift. Lenders were investing in core banking platforms that would shift customers away from brick-and-mortar branches. The colleagues felt there was an entrepreneurial opportunity in building a layer of services that would assist banks in what they were doing.

Back then, online share trading and online lending were high up on banks’ list of priorities. By building their own share trading platform, they would end up competing directly with the banks. As for lending, that was even more in direct competition. Srinivasu, Kaushal and Ganapathy were clear that they would not compete with the banks, who would be their customers, so they nipped in the bud any plans to enter these segments.

The one area where they could act as partners to banks would be payments, they felt. And soon, BillDesk was formed.

They started by connecting banks with any merchant or utility that had to accept payments from customers. An important feature of this model was that it involved no end-consumer acquisition for BillDesk—the company would only take a cut from the merchant, bank or utility for every transaction it facilitates.

A digital solution was a win-win for all. For end-consumers, there was convenience, for utilities there was the benefit of efficient collection at lower costs, and banks could reduce the footprint of customers at their branches.

BillDesk signed up banks and merchants onto its platform and integrated the technology. Their end consumers would visit their bank’s website, login, select the bill payments option and make all their bill payments in one place. That “one convenient bill payments aggregation platform was what we started with,” says Srinivasu.

Banks soon learnt that despite the initial low volumes, customer retention was high. Anyone who used the online bill payments option once, always came back. There was also an unintended benefit—banks noticed that customers who opted for online bill payments were also retaining more money in their bank accounts as opposed to physical cash earlier.

BillDesk had tapped a niche market as neither banks nor billers had devised any form of electronic bill payments. The initial years went in building demo solutions to show how it all worked, so the banks and billers would be convinced to try it out. For instance, it took the three entrepreneurs four years of constant coaxing and demonstrating before BSNL agreed to sign on in early 2006.

Along the way, the startup raised seed money—$500,000 from Sidbi Venture Capital and Bank of Baroda. (Sidbi sold its stake in BillDesk to TA Associates in 2011.) The first five years were sustained with that money as BillDesk invested in building networks and other infrastructure, while revenues stayed low.

However, by the end of the fifth year, BillDesk’s customers, banks and billers were starting to witness a change. More people were getting comfortable with internet banking and making bill payments online, and the billers were willing to pay a fee for the service.

The entrepreneurs’ persistence was validated the following year, when revenues tripled to ₹6 crore, compared to the previous year. That year, 2006, was also when SBI and Clearstone—also the first institutional investor in US-based online payments provider PayPal—invested in BillDesk. The combined round was $7 million, which took BillDesk all the way to 2015, when General Atlantic and Temasek together invested about $200 million, valuing the startup at $1 billion, The Economic Times had reported then, citing unnamed sources. In 2009, there were changes in the capital adequacy rules in India because of which SBI and Bank of Baroda had to dial down their holdings—around 10 percent each—in the company. TA Associates kept buying from the two PSU banks.

Today, TA Associates and General Atlantic are the two largest shareholders in BillDesk with Temasek and Clearstone not very far behind.

By 2009, the BillDesk platform had evolved to allow end-consumers to go directly to a merchant’s website and make their payments, rather than through the bank’s website. This became the second phase of growth—aggregating multiple payment methods so that consumers can choose the option they prefer.

Along the way, banks introduced their own e-wallets, and BillDesk has kept pace by recognising these payments as well on its platform.

Today, BillDesk processes over $4 billion in payments every month, not far behind the combined volume processed by Visa and Mastercard every month, which Srinivasu reckons is about $5 billion.

While so much hard work has gone into making BillDesk what it is, the real growth is still ahead for the company as India’s fintech sector, whose fortunes are linked to BillDesk’s, is poised for growth.

The transaction value for the Indian fintech sector is likely to touch $73 billion in 2020, growing at a five-year CAGR of 22 percent, KPMG estimates. Deal data tracked by KPMG also points to growing interest in fintech in India, where two of the top 10 global fintech deals in the January-March 2017 period were sealed.

And that is another facet of how things are evolving. Competitors— PayU, CCAvenue, BillJunction, and newer startups such as Razorpay—are springing up as India’s startup ecosystem gathers steam.

“The industry is evolving and is big enough for multiple players that have differentiated offerings as there are new and diverse business use cases coming up each day,” Harshil Mathur, co-founder and CEO at Bengaluru’s Razorpay, tells Forbes India in an email.

Razorpay recently announced a suite of products that Mathur and co-founder and CTO Shashank Kumar expect will provide a comprehensive cashflow management solution to businesses—a different approach compared to BillDesk.

Still, there are factors that give BillDesk an advantage over competition, its market dominance, first-mover advantage and a portfolio of large existing customers, says Srinivasu. This confidence also explains why he does not have to project his business.

“The DNA of the company is such that we’ve never had to play up what we do,” he says.

The company has stayed under the radar, which also helped it quietly build scale. Now, demonetisation has “ incrementally changed trajectory”. From the 80-100 million transactions that BillDesk sees every month, the government says it wants to see 25 billion transactions a year
in the country. “It is a quantum leap” in expectations.

This has brought the focus right back to what’s at the core of BillDesk—how does it continue to retain the largest market share of total payments volume (TPV) and gain on it.

The India of 2020 will be different in terms of digital payments. Additionally, how can all that it has done so far, help banks and merchants use analytics, predictive analytics, and eventually Artificial Intelligence, as ways to interact more with their customers.

Poddar at TA Associates points out another, less-recognised, ace up BillDesk’s sleeve: “It continues to be, in our view, the best derivative play on the growth of the Indian ecommerce industry.”

As India’s nascent ecommerce market expands, BillDesk will be a large beneficiary, providing a big chunk of the underlying payments infrastructure.