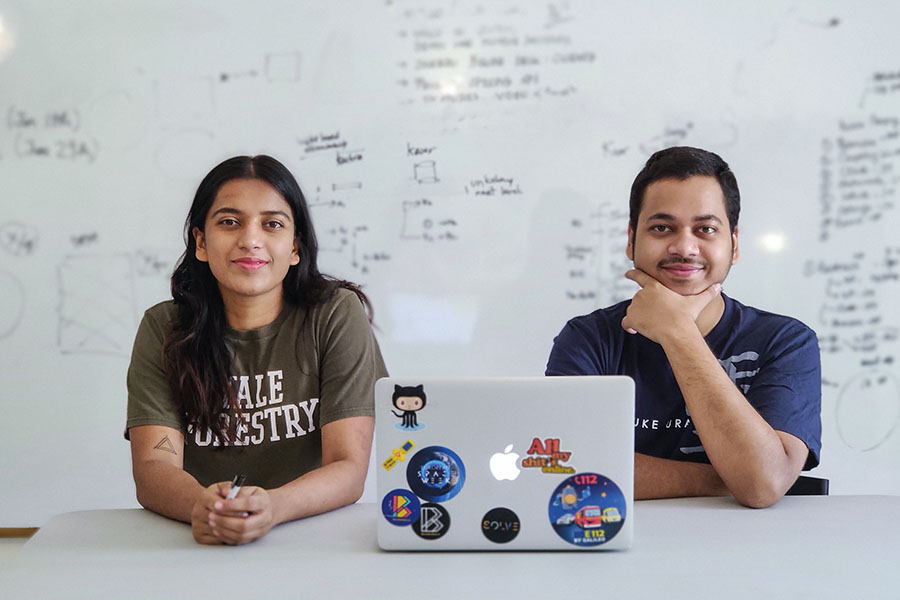 In the early 1980s, soon after he was sacked as a partner at Salomon Brothers, Michael Bloomberg knew what he had to pivot to. Data was fast emerging as the new oil. It was all about providing accurate real-time data to help decision-makers, corporates and traders in their quest for profits. Over the past four decades, economies have boomed and corporate fortunes grown, and the gamble has paid off. Today, Bloomberg is the world’s 16th richest man with a fortune of over $60 billion.

His eponymous Bloomberg LP has become one of the world’s largest financial information and media companies. The Bloomberg terminal has over 325,000 users with subscriptions costing between $20,000 and $24,000 annually. It is a powerhouse of data and research on companies, financial instruments and exchanges from all over the world, which helps traders, analysts and executives make financial calculations, compare investments, analyse and make decisions.

Inspired by the business model, Abhilasha Purwar and her brother Kshitij—working out of a basement in Gurugram—are laying the foundation to build a Bloomberg for the environment. Founded in 2018, their company Blue Sky Analytics collects raw environmental data from public and private sources, uses its technology to decipher the data and makes it user friendly before offering it to potential buyers, including governments, insurance companies, health care providers and agroforestry companies.

Blue Sky Analytics was the winner of $360,000 in prize money at MIT Solve, an impact-focussed initiative of the Massachusetts Institute of Technology, in May. “A health care company may need to provide medicines in case of severe air pollution and plan its supply chain based on the crisis,” says Purwar, 29, who is CEO. “Similarly, insurance companies need to make decisions based on environmental risks. We aim to be a platform that can provide all kinds of environmental data that is easy to understand. We are building the Bloomberg for environment data.”

The focus on environment is now more crucial than ever. In the past year, the world witnessed the Australian and Amazon forest fires apart from numerous cyclones and unpredictable weather patterns. India ranked 5th in the Global Climate Risk Index 2020, prepared by Bonn-based think tank Germanwatch. In 2017, it was the second most affected country in terms of casualties related to extreme weather. According to the World Health Organization’s global ambient air quality database, 11 of the 12 cities with the highest levels of small particulate matter (PM2.5) are located in India. “To deal with the climate change crisis, we need to have important data… we can’t solve it without adequate data sets,” says Purwar.

The company crunches terabytes of complex data from numerous satellites owned by Nasa, European Space Agency and various private providers before doing multiple levels of processing and advanced analytics on it through its proprietary artificial intelligence-enabled infrastructure.

Already, two products, Breezo, an app that helps study air quality data across days, months and years from all pollution control boards in India, and Zuri, a platform to measure and monitor farm fires and stubble burning in India, have been launched. Blue Sky Analytics is in the midst of building a database on forest fires, underground water levels and the storage capacity of lakes, among others. It has started providing environmental data to the governments of Delhi, Madhya Pradesh and Maharashtra.

“Our vision is to build the world’s largest spatially and temporally continuous dataset on key environmental parameters and transform the monitoring, diligence and risk assessment systems in India and globally,” says Purwar. 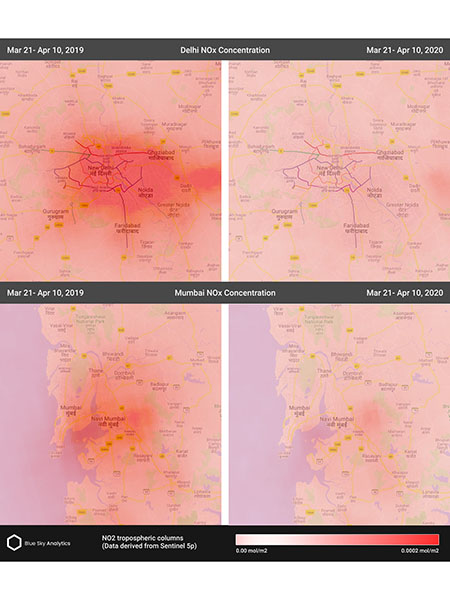 Derived from satellite data by Blue Sky Analytics, the images reveal the reduction in nitrogen dioxide levels over Delhi and Mumbai during the lockdown as compared to the same period last year
Courtesy: BSA (Blue Sky Analytics)

Purwar and Kshitij, who is chief technology officer, grew up in Ghaziabad near New Delhi. After graduating in 2012 from IIT (BHU), Varanasi, Purwar worked with the Abdul Latif Jameel Poverty Action Lab and was consultant to the ministry of environment. She then went to Yale University as a Fulbright scholar to graduate in environmental management.

The turning point came in 2018 when Purwar read about the massive pile-up of vehicles on the Yamuna Expressway near New Delhi during winters. “That shook me and I kept thinking about what we can do,” she says. That’s when she joined hands with Kshitij, who had dropped out of college but was a self-taught developer and programmer, to build Blue Sky Analytics.

“We figured that there were a lot of gaps in air quality, especially when you move out of the urban centres. Similarly, access to data on a lot of other environmental parameters such as the number of trees or underground water was missing. That’s when we looked at geospatial data and there were a lot of nuances that it could offer… that’s been a powerful driving force,” says Kshitij.

Purwar has used her personal savings to fund this. “We are more interested in the impact and technology than revenues,” she says. “That way, we are terrible founders.”

“We don’t want to put a new terminal out,” says Purwar. “We will work in the API fashion. Terminals happened because it made sense in those days. The relevance of environmental data, for instance, is that the Australian fires had a direct impact on the country’s GDP. That had a direct impact on business and there are lakhs of funds that trade in the Australian commodities market. If we can put out these indicators, they can make informed choices.”

Over the next five years, the brother-sister duo is looking to target revenues of $250 million in their quest to build a billion-dollar venture. But it won’t be easy. “In India, the monetisation of data is a big problem,” says Jatin Singh, founder and managing director of Skymet Weather. “What they are doing definitely has potential and promise. But, say in case of water, because it is entirely government controlled, the buyer will be the government and that will be a challenge. Hence monetisation can be troublesome.”

“They are a bunch of high functioning nerds who can bring about a solution to a global problem,” says Gupta of Dalberg. “This is a solution that needs to exist in the world. A strong Indian brand is solving a global issue… it is all about packaging the data and adding value to it… that makes it relevant.”