The man who put Amazon on cloud nine

Andy Jassy, the CEO of Amazon Web Services, believes India will be one of the biggest markets for the ecommerce giant's cloud business. This vertical also happens to be its current cash cow 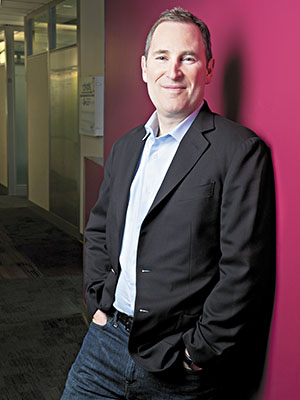 Andy Jassy, CEO of Amazon Web Services (AWS), has visited India over a dozen times by his own reckoning. His visits, though, are not as sonorous as his boss Jeff Bezos’s. Recall how the founder and CEO of ecommerce behemoth Amazon Inc had put on a shiny bandhgala and posed for photographs, which went viral on social media, leaning out of a truck’s cabin in Bengaluru in September 2014.

Despite Jassy’s lower-pitched demeanour—he prefers a simple business suit and uses a BlackBerry Classic—he has been garnering customer after customer in the country for AWS, Amazon’s cloud computing unit, which has achieved a revenue run rate of $10 billion (around Rs 67,000 crore) globally. The unit, set up in 2006, currently garners about 15 percent of Seattle-based Amazon’s overall revenues but nearly half the company’s operating income.

AWS offers computing and data storage solutions to its clients in a pay-as-you-go model. It has also been adding an increasing list of sophisticated services such as data analytics and ‘serverless’ computing. Customers in India, where AWS has had a presence starting with a remote development team set up in 2003, now number over 75,000—from the tiniest startups, billed a few dollars a month for trying out some features, to established conglomerates such as the Tata Group.

Jassy, 48, opened AWS’s first India data centres in Mumbai in June this year, giving the division the wherewithal to consolidate its dominance in the country’s cloud computing market, which Gartner Inc, an IT market researcher and consultancy, projects will grow from about $1.26 billion this calendar year to $3.5 billion by 2020.

“We are optimistic that, in India, we can help startups evolve into the next generation of enterprises,” Jassy tells Forbes India. Established businesses can “reinvent” their customer experience and government agencies can serve citizens better, quicker and at lower costs with AWS, as they don’t have to spend a lot of money on buying their own large banks of computer servers and storage units, he says.

In the coming years, India could be “one of the largest businesses and regions for AWS in the world, if not the largest,” predicts Jassy. Region, in AWS-speak, refers to locations with multiple data centres—places where the company has built a large computing and storage infrastructure. AWS has 13 geographic regions globally, comprising 35 “availability zones”, where each availability zone can have one or more standalone data centre.

Jassy declines to give country-specific revenues, but says India is a significant contributor “by anybody’s standards”. And over the next five to 10 years, both in terms of customers and contribution to AWS’s overall revenues, he expects India to be “one of the very biggest” markets for the cloud computing unit. There are very few countries with economic growth comparable to India, he points out. “We believe India is going to be one of the largest, most successful technology markets in the world.”

Amazon’s association with India predates its recent ecommerce foray. It set up a development centre in Bengaluru in May 2003, with two teams—one working on AWS and the other on A9, Amazon’s search software, among other things. Today, Amazon employs 45,000 people in the country and is investing $5 billion (around Rs 33,500 crore) for its India operations. AWS itself has six offices in India.

Jassy joined Amazon after completing his MBA from Harvard University. “My plan was to work with Amazon for two to three years and then move back to New York, where I come from.” He recalled how he and his wife had used a napkin in a bar to mutually agree to that plan. That was 19 years ago.

There were strong reason to stay on, he says. “The culture at Amazon isn’t slow, it’s not stodgy. It’s fast-paced. It operates like a big startup, which suits my entrepreneurial interests well. It isn’t political. I would have been very ineffective in a political environment. It’s very driven by what you deliver,” says Jassy. That is why he has stayed on.

Early in his career at Amazon, Jassy was in the spotlight for the wrong reason. At the home of a senior marketing executive, the team was unwinding over a game that involved whacking a medicine ball with a broom to get it to move. There weren’t enough brooms for the 20-odd people and improvisations included a canoe paddle for Jassy. “The game was very aggressive and people, including myself, were swinging wildly. I hit Jeff [Bezos] on the head,” Jassy recalls, adding that Bezos now says he has no recollection of the incident.

Over the years, Jassy has built multiple businesses within Amazon. Notably, he was the author of the original plan to build the company’s music business in 1998 although, eventually, the mandate to lead the business did not fall on him.

He also served as the first official ‘shadow’ to Bezos (a role that involves trailing the CEO). Jassy went everywhere his boss went; sat in on all meetings, brainstormed strategy on a daily basis and so on, according to the award-winning book on Bezos and Amazon titled The Everything Store: Jeff Bezos And The Age Of Amazon by journalist Brad Stone.

Work on AWS started in 2003, Jassy said, and when it was launched in  2006, the business started with two services. One was EC2 or elastic cloud compute, which allowed businesses to rent processing power on the go, and the other S3 or simple storage service.

Today, AWS—Amazon’s fastest growing and most profitable unit—is seen to be an important factor that helped Amazon register a profit for four quarters on the trot, including the latest quarter ended March 31, 2016.

A favourite statistic AWS executives like to cite is the number of times the unit has slashed the price for its services—51 at the time of this interview. Its services include various permutations and combinations of computing and storage options. AWS’s computing service is called EC2 (elastic compute cloud) and the storage service S3 (simple storage service). During the early days of EC2, there was just one Instance—the smallest unit of processing power a client could rent. Today, there are nine Instance families and most have six different Instance sizes, explains Jassy. “The basic unit of compute has been shrinking,” he says, which means cheaper ways for AWS customers to run quick and small programs on the cloud.

Then there is Aurora, AWS’s alternative to on-premises, licence-based databases, which can cost as less as a tenth of the conventional option, adds Jassy.

A related database-migration service, started in the beginning of this year, has seen 7,000 migrations thus far, and is the “fastest growing service in the history of AWS,” Jassy says. Businesses can use this service to move from on-premises, commercial licence-based databases from vendors like Oracle, to either the cloud version of the same or to AWS’s own solution called Aurora.

Analytics, including real-time analytics, is another big draw, and Artificial Intelligence can’t be far behind, he adds. “We have over a 1,000 people working on Artificial Intelligence,” he says. The applications are everywhere—from the floor of the fulfilment centres to Alexa, the speech-recognition software that runs on the popular Amazon Echo speakers.

“I’m super excited about what’s happening in the IoT [Internet of Things] space,” says Jassy. There will be millions of sensors in our homes, workplaces, buses, cars, oilfields, airports or any other human location. Most of these sensors will be so small that much of the storing and processing of the data they collect, will have to happen on the cloud—a huge opportunity for AWS.

A logical next step for Jassy is to increase the geographic footprint of AWS. This year, the business plans to add four more data centre locations in China, US, Canada and Britain. Eventually, Jassy expects to have data centres “in every tier-1 country” where there will be enough demand both for reasons of business and data sovereignty.

There is also, within AWS, a marketplace that currently has about 2,000 business software products that customers can just start using. That unit saw 350 million hours of usage in March this year and is growing 125 percent annually.

Jassy believes that at Amazon, the best ideas win. “We find ways to say yes to a lot of new ideas, because we like inventing, we like pioneering. We are willing and excited to experiment. We are not afraid to fail.” “We tend to look at things with a 10-year horizon,” he says, adding that the company is “tactically impatient but strategically patient”.

Despite AWS’s lengthy headstart in the cloud business, globally it now faces competition from Microsoft’s Azure, Google Cloud Platform and IBM Cloud. Amazon isn’t the first multinational technology company to set up a local data centre in India either; Microsoft, for instance, did it earlier. But now that AWS has started a data centre region in India, Jassy expects business here to accelerate dramatically.

Cab aggregator Ola is a sophisticated user doing “analytics on a petabyte-scale with AWS. And because of the way they have built their systems, they are making up to 30 changes to their applications every day,” says Jassy.

The power of cloud computing, and the services that AWS offers in particular, is manifested in the fact that Ola requires just three people to handle everything it has on Amazon’s cloud.

Media company NDTV has been using AWS from 2009 for its digital and TV operations. In May 2014, during the general elections “they had to handle 14 billion hits a day”. “It wouldn’t have been easy or possible without the cloud,” Jassy says, emphasising the bearing this sector has on the overall business scenario.