Rolling with the punches 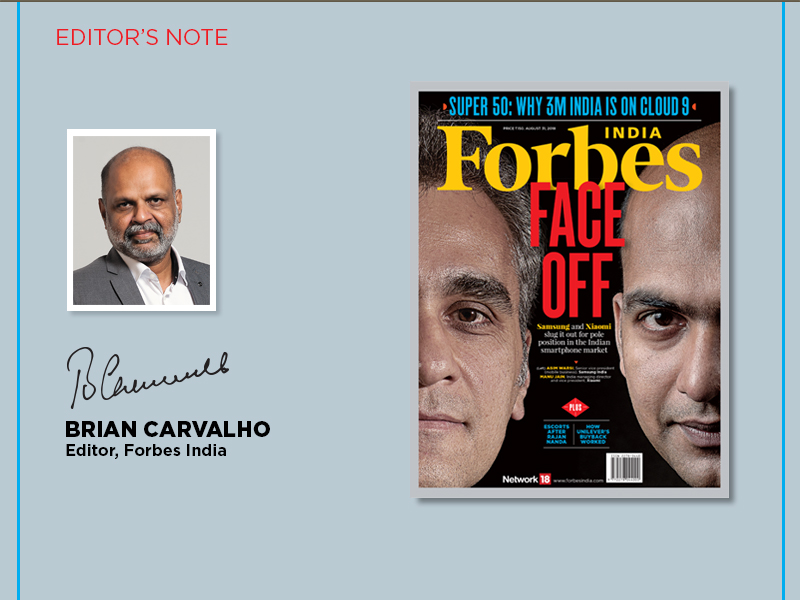 When the going gets tough, the sales get going. That slight paraphrase of a well-worn truism may best explain the resilience of the two fierce rivals that feature in this fortnight’s cover story: Samsung and Xiaomi. The current battleground is, of course, the Indian smartphone market, the world’s second largest after China, where both brands are engaged in a no-holds-barred slugfest for the top slot. 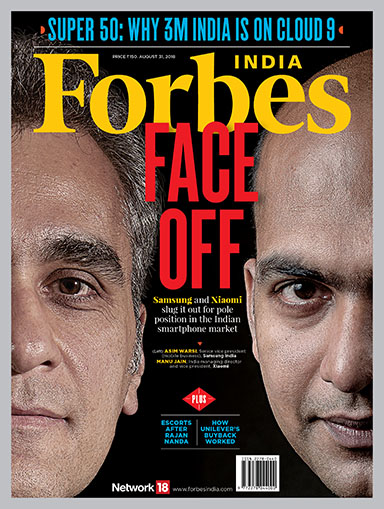 Let’s begin with Samsung. Forbes India’s Rajiv Singh, who wrote the cover feature, points out how an incident in a factory yard in South Korea back in 1995 proved a tipping point for the Korean consumer electronics giant and led it towards keeping ‘quality first’ and gaining user trust. Imagine a Samsung CEO—Lee Kun-hee at that time—along with his board of directors bashing screens of mobile phones and TVs with hammers and then tossing it all—some $50 million worth of hardware—into a huge bornfire. Why? Well, it’s just that Lee was appalled by the lack of quality coming out of Samsung factories. The destruction had a message: That mediocrity would not be accepted. The cleansing also served the purpose of making Samsung completely rethink its products and step on the path of producing world-class ones.

Three decades later—periodic setbacks notwithstanding—Samsung dominates the global television market, and is No 1 in smartphones. It’s been No 1 in India, too, since it toppled Nokia in 2012, and it’s only in the past few quarters that it is being challenged—by an eight-year-old upstart, Xiaomi. As Singh writes: It’s a fierce battle between equals with none willing to settle for the runners-up spot.

If Samsung has been able to shrug off the ghosts of amateurishness, Xiaomi has, in a shorter span of time, pulled off a Lazarus act. Three years ago, it was the most valuable unicorn in the world. A year later analysts called it a unicorpse as supply chain issues and an overreliance on online buyers sent Xiaomi plunging from No 1 in China to No 5 in smartphone sales.

Xiaomi didn’t die. It came back in style, and by 2017 was the world’s second-largest smartphone vendor, after Samsung. And that is what makes the battle for the Indian market perhaps the most exciting one in a long time to play out in this neck of the woods—the world’s No 1 and No 2 players sparring in the arena that has the most potential for growth (Western markets are saturated and China is cooling down). Our cover story gives you a ringside view of the face-off on domestic turf.

This fortnight’s edition also has our annual marquee study, the Forbes India Super 50 list of companies, with knowledge partner PricewaterhouseCoopers (PwC). The Super 50 is a collection of companies with the best shareholder return, sales growth and return on equity over four years.

Financial services firms dominate this list, but, as Samar Srivastava who worked closely with PwC on this project points out, the cycle for most of these lenders of home and personal loans may have peaked. It wouldn’t be a bad idea for now to look beyond this flock to the more sustainable companies on this list. One such epitome of excellence is 3M. In a rare interaction with the business press, the management of the company famous for brands such as Post-it, Scotch-Brite and Scotchgard met up with Forbes India’s Anshul Dhamija to reveal what makes it tick. Don’t miss it.
Best,
Brian Carvalho
Editor, Forbes India
Email:Brian.Carvalho@nw18.com
Twitter id:@Brianc_Ed

Tweets by @forbes_india
Podcast: Decoding the Samsung and Xiaomi battle
Like Pakistan's Imran Khan, these five sportsmen have also played the political field