The age of inspiration

There's no better time to make reimagination a recurring theme

Don’t get fooled by the cheerful clichés. Age is not just a number, a state of mind or a psychological complaint. It is a real living thing.

Try to forget that and the body whispers cruel reminders. And nowhere more emphatically than in the world of competitive sports, where 40 isn’t the new 30, much as we’d like to persuade ourselves otherwise. The spirit may be willing but that injured tendon isn’t. 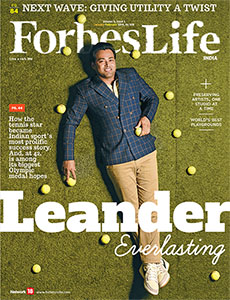 Acutely aware of these limitations but determined to rage against them is the icon on our cover in this issue. Not even age can stop a man who has braved every outrageous arrow life has shot at him to cut an inspirational figure like few others in Indian sport. Consider how, in a country dominated by cricket, Leander Paes, along with his tennis doubles partner Mahesh Bhupathi, managed to give fans another sport to cheer about. His subsequent fallout with Bhupathi was grist for the gossip mills, as was his tempestuous personal life. But Paes has survived it all—including a potentially life-threatening medical condition—to ace another day.

Now, at 42, as he prepares to play for the tricolour at the 2016 Rio Games, he continues to be among India’s best chances to win an Olympic medal: His second, after a bronze at the Atlanta Games in 1996.

“C’mon, say it. Don’t be shy,” he urged Kathakali Chanda when she hesitated to bring up the A-word. Paes certainly isn’t diffident, or delusional, about it. On the contrary, he is combating its inevitable impact smartly: There is no elixir, he insists, just “mind over matter”. He has a great role model in his one-time mixed doubles partner, Martina Navratilova, a legend who demonstrated masterfully that longevity isn’t a mirage by winning a Grand Slam title at 49.
That in mind, Paes is reinventing his game, his approach, even as regular Joes and Janes like us often struggle to accept the limitations advancing time imposes on us. Yes, we do need the likes of Paes to show the way.

Now, this is the beginning of the year, and we wanted inspiration to be a recurring theme in this issue.
Take Jasodhara Banerjee’s account of how curators and museums are beginning to showcase the legacy of Indian artists—their studios, art material, rough sketches, even personal communication. It is a reassuring trend.
After all, the machinery and mindset behind a finished work of art is as revealing as the final product itself. For instance, a recreation of the home library of art critic Gita Kapur and her husband, installation artist Vivan Sundaram, by the Asia Art Archives offered a glimpse of the idiosyncrasy of the space in which Sundaram worked, she writes.
Meanwhile, another set of artists—product designers, in this case—took on the task of rethinking everyday products into things of beauty for us, at the behest of Benu Joshi Routh. Not only do these versions look good, they have the potential to do good as well. Think ergonomic kitchen tongs, smart (colour-changing) pavements and a mushroom that makes litter easier to separate.
Reimagination, after all, is the order of the day.