Bollywood has recently been fascinated with biopics on sporting legends. But much of the on-screen action is thanks to smart camera angles and editing. Here are a few rare moments when it actually got real 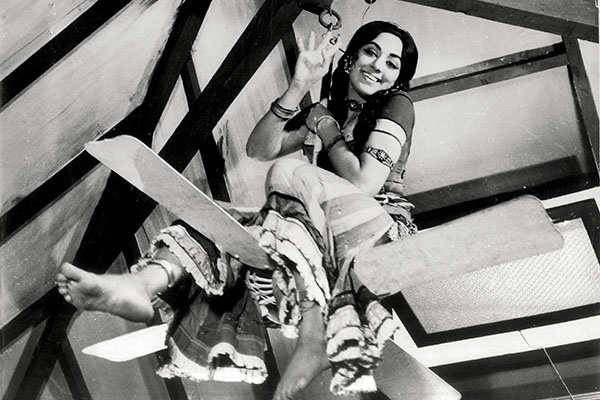 The Mighty Ping-pong
This is probably something you have seen but not noticed. In Seeta Aur Geeta (1972), Hema Malini’s Geeta (a runaway street acrobat) takes on the evil Ranjeet with a ping-pong racket. What is actually spell-binding is the number of times she bounces the ball on it, without dropping it even once, all the while mouthing fiery dialogues, walking around Ranjeet, eyes flashing anger and loathing. At last count, she had bounced the ball 17 times at a stretch.

And then, of course, there was that entirely fake roller-skating with Sanjeev Kapoor in ‘Hawa ke saath saath’.

But let’s focus on the better things, like the time she was actually sitting on a ceiling fan.

Two-wheel Tricks
The early 1990s was when the Hindi film industry was bingeing on high school/college films—Phool aur Kaante (1991), Khiladi (1992), Jo Jeeta Wohi Sikandar (1992)—no matter how tenuous the link was between the plot and the classroom. Jo Jeeta… added its own two bits of innovation to the plot by including a marathon bicycle race. Keeping aside the scenes of the races, it can be said that Aamir Khan is definitely comfortable on two wheels. In the song ‘Nahin samjhe hain woh hamein’, he is out cavorting with his buddies when he lets go of the pedals and even stands up on the seat of his moving cycle. Still later, while mouthing ‘Yeh galia apne, yeh raste apni’ he lets go of the handle bars for an extended time.

That these antics come effortlessly to him is also evident in a blink-and-miss scene in Akele Hum Akele Tum (1995), in the song ‘Dil kehta hain’, where he is cycling full-tilt on a road full of traffic, his red shirt flapping in the breeze, while he takes his hands off the handles bars and casually runs his fingers through his hair.
It’s been quite a while since we have seen this refreshingly happy-go-lucky side of Khan, now that he is on to matters of graver importance on screen, or off. 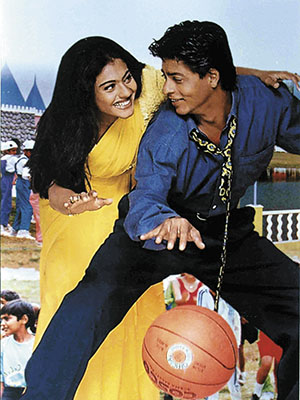 Image: Express Archive Photo
Kajol and Shah Rukh Khan in Kuch Kuch Hota Hai
In-sync Badminton
It is not possible to forget this song if you have seen it, even once. You may not remember the name of the film (Humjoli, 1970), or the name of the actress (Leena Chandavarkar), but you cannot possibly forget Chandavarkar’s and Jeetendra’s version of badminton while singing ‘Dhal gaya din’. Despite all the sharp editing, it is a fact that the two actors actually hit the cork on cue to the music many a time during the song. They twist and turn, jump and frolic, but don’t miss a beat. So, ‘Dhal gaya din (hit), ho gayi raat (hit), jaane do (hit), jaana hai.’ It’s incredible.
Courting Baskets
Basketball, too, has found its way onto the silver screen in recent years. Hrithik Roshan, who does seem to dribble decently, has had two gos at it—in Koi... Mil Gaya (with kiddies and an alien in tow), and the ‘face-off’ with Aishwarya Rai Bachchan in Dhoom 2. But, of course, there is editing at work. The best part about the basketball-playing scenes in Kuch Kuch Hota Hain is that they are restricted to a few minutes each. Anjali (Kajol) and Rahul (Shah Rukh Khan) dribble, duck and slam dunk on the court in college, with Anjali winning more points over an increasingly infuriated Rahul (although it is apparent that Khan is more adept at handling the ball). Years later (eight to be precise), Anjali, swathed in a sari, has lost her touch, while Rahul has honed his. They meet again, on a court, in a battle of the sexes, to cheering tiny tots. Khan’s comfort with the basketball is even more apparent here, and he even tosses it backwards, neatly into the basket—no, no sharp edits at all.

Tweets by @forbes_india
Blackstone buys minority stake in IBS Software for $170 million
The cynicism towards India is rapidly fading away: Amitabh Bachchan