For Parvathy, choosing the right script goes hand in hand with making the Malayalam film industry a safer place for women 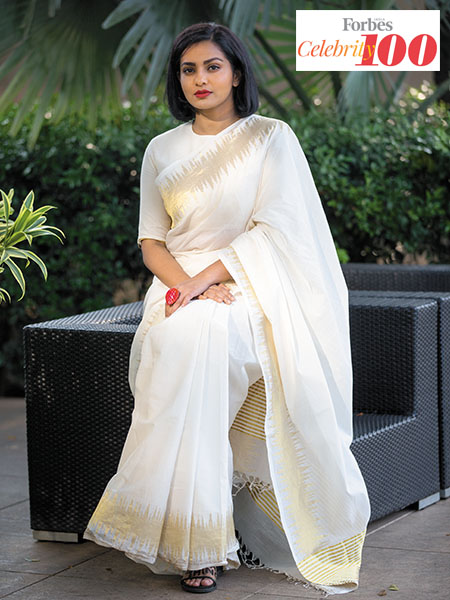 Actor Parvathy has never shied away from speaking her mind. Growing up, she would often remind her parents to pay attention to her opinions rather than dismissing them as the ramblings of a teenager. Today, the two-time Kerala State Film Award winner for best actress, and a Special Mention awardee in the National Film Awards, hasn’t changed much—she continues to speak her mind, even if it means causing discomfort in certain quarters.

“The film industry is a workplace, and as with any other workplace where there are mechanisms in place to solve problems and ensure a safe environment, we are trying to have the same here too,” Parvathy tells Forbes India.

Born to a lawyer couple, Parvathy studied in Thiruvananthapuram  before going on to become a video jockey at Kiran TV, a southern music channel. Her success at hosting shows led her to films; her first movie, Out of Syllabus, released in 2006. Although the film did poorly at the box office, her second film, Notebook (2006), about three teenage girls, was a super hit and brought her instant recognition. A few more Malayalam movies followed, after which she moved to Kannada films where she acted alongside superstar Puneeth Rajkumar. Between 2009 and 2012, however, the actor didn’t find much success, except for a few Tamil movies, partly because of her obsession with finding the right script.

“During those days, I used to get calls from directors who wouldn’t even have a producer or any follow-ups,” Parvathy recalls. “I was down and out but I wasn’t desperate. I chose to spend that time investing in education, waking up at 4 am to study,” says the actor, who holds a master’s degree in English literature.

The self-imposed break ended when she was cast in the wildly successful Bangalore Days (2014), directed by popular Malayalam film director Anjali Menon. A few years before that, Parvathy had reached out to Anjali over email and expressed her desire to work with her. “I was on my way to Mumbai in 2013, and saw Anjali at the airport,” Parvathy recalls. “I decided I had nothing to lose, and went up to speak to her. That’s when she told me that she was already planning on calling me for a role in Bangalore Days.” Menon had made the critically acclaimed Manjadikuru (2012) and written the script for the successful Ustad Hotel (2012).

Last year, she made a foray into Bollywood with the romantic comedy Qarib Qarib Singlle opposite Irrfan Khan besides working in My Story (2018), a Malayalam romantic movie and Koode, a psychological drama by Menon. “In August 2015, Tanuja Chandra (director of Qarib Qarib Singlle) got in touch with me after seeing some of my work, and the movie was finalised in December that year,” she recollects.

A favourite among audiences in Kerala, Parvathy is also an unusual star. She shies away from inaugurations and endorsements. She takes up only one movie at a time and once she completes a film, she takes a break to travel.

“As an actor, I would like to retain a certain invisibility,” Parvathy says. “It shouldn’t be that my public image becomes more important than the characters I portray.”
*****
Her taking a public stand on issues and speaking up have come at a price.

Last year, she was the victim of cyberbullying when she questioned misogynistic dialogues in a movie starring superstar Mammootty. Fans of the 67-year-old actor, who is revered in Kerala, took to social media and threatened her with rape and death. It was perhaps the first time in Kerala that an actress had spoken up against a superstar, questioning his roles and dialogues in a movie.

“Parvathy is somebody who has broken away from tradition,” says Sreedhar Pillai, film critic and trade expert. “Earlier, actresses would never speak up. She is bold, and a fantastic actor as was evident in her fabulous performances in Ennu Ninte Moideen, Charlie, Take Off and Bangalore Days. With the Malayalam film industry changing and becoming more content-driven, she has a huge role to play in the coming years.”

Over the past year, WCC has fought a public battle with AMMA, now headed by Mohanlal, over not expelling actor Dileep, despite him having spent over 85 days in jail. AMMA eventually expelled him in October.

All of which meant fans of the superstars had more arsenal to attack Parvathy further on social media. The fans, who often taunted her as a “feminichi” (slang for feminists), went on the offensive when a song from her movie My Story (starring another superstar, Prithviraj) was released. The song received over 175,000 dislikes on YouTube. Even now, Parvathy’s posts on social media or YouTube continue to be met with a similar fate.

“It is certainly going to take generations and generations to bring about a change in the way we think,” says Parvathy. “But, now I am calm. We have set the ball rolling. Everyone has a responsibility to sustain the movements that forge the path toward equality. I am doing my part. One step at a time.”

Does it also affect work coming her way? “People find it difficult to work with a whistleblower,” says Parvathy. “I am not as affected as many of the others are. Our focus is on cleaning up our workplace. And this doesn’t take away from our craft. We want to make films. I hope that Malayalam films consistently find a place in the national and international arena.”