'My audience has grown with me': Russell Peters 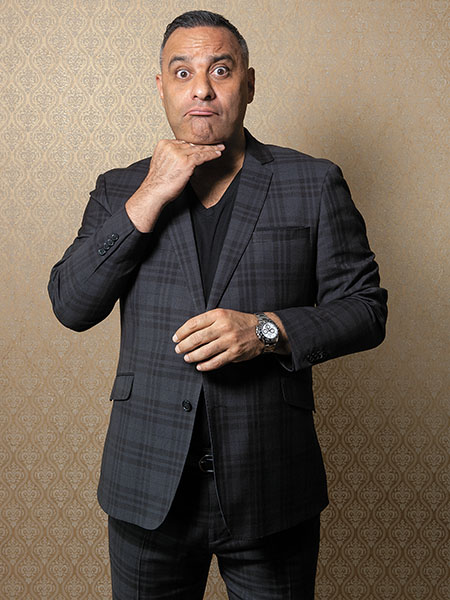 Russell Peters has been one of the pioneers in the space of standup comedy. For a lot of Indian standup comics, he’s an inspiration. Peters began at the age of 19 and took up whatever odd jobs he could—big and small shows—to sustain himself as a standup comedian. There were times when he was completely broke, but he says, “It was my job. And I wasn’t ready to give up.”

Inspired by comedian George Carlin, Peters has been vocal about his views and has no qualms about being politically incorrect. “I know what my intention is… if what I say is being misconstrued, that’s more your issue than mine,” he says. The only topic he steers clear from is religion. When Peters was in Mumbai for his Deported World Tour earlier this year, he spoke with Forbes India about his journey and standup comedy hitting a saturation point. Edited excerpts:

Q. How did you get into standup comedy?
After I graduated from high school in 1988, I thought I would study to become a chef. After I was offered a job at the Hilton Hotel, I realised this is not what I want to do. So I took up a bunch of odd jobs because I wasn’t skilled enough. I was always the funny guy in my crew. Once, my cousin told me, ‘You’re funny, you should try standup comedy’.

I went to see some shows at a club called Yuk Yuks and when I saw those amateurs perform, I was like, ‘That’s it… I want to do this’. In November 1989, I finally decided to get up on stage and do it.

Q. How was your experience being on stage for the first time?
I was horrible. The problem is when you’re the funny guy in the group, there’s a lot of background noise that you hear, but don’t notice. When you’re on stage for the first time, you realise you are the only voice that can be heard in the room. And then everybody is waiting for you to say something. That’s when it hit me that this is completely different from what I thought it would be. Yet, I got a giggle. I liked the sound of that and wanted more of those. And I was hooked.

Q. What were the challenges that you faced early on?
I did my first special in 1995 and then another in 1997. Five years went by and I didn’t do a single special after that. In 2003, I was offered another special. Although it was a lot less money than what I made in 1997, since I was completely broke, I took whatever came my way.

It was a great opportunity for me. The best part was that I had five years to prep that material. And that’s why it was so solid, so polished and so good. I wasn’t ready to give up. I kept doing standup, while I was trying to get a special. I was barely making enough, but I believed I’d rather be broke doing what I love, than rich doing something I hate.

Q. What inspires the content for your set?
It all stems from my upbringing. I’ve always been culturally and racially aware. Since I was a little kid, I was made to be aware, I was forced to know that I was different.

Q. How do you balance between what you want to see versus what the audience wants?
That’s the beautiful thing about being in it this business long enough. My audience has grown with me. I have been lucky enough to have fans consistently show up. They are like, ‘What has happened since the last time we saw you’. They are almost waiting to see what will happen next? I never hold back; it’s almost as though my audience comes to hear me read my diary, and that’s a wonderful feeling.

Q. What has been your most memorable performance so far?
The first time I sold out the Air Canada Centre, Toronto, in 2007. It was my hometown. And it sold out two nights in a row and had 16,000 people a night. It was the first time a comedian had ever done that. You could hear the entire audience scream. I couldn’t believe all that was for me. I started getting teary-eyed, my chin started quivering and I remember telling myself: ‘Get it together, you have to get on stage right now’. This was only three years after my dad passed away. So I was like, ‘Damn, if he just stuck around’.

Q. Do you think the standup comedy space is getting saturated?
There are so many specials coming out nowadays, but there can’t be that many ‘special’ things out there to talk about. There can be an oversaturation of the market. When a standup comedian is popular, people want to do something with him. A lot of such people have a lot of media pressure, but cannot sell out a 300-seater comedy club. So where do you draw a line? How do you invest so much in a person? But that’s what makes this game [the comedy business] so interesting. And so intriguing. It’s like a Rubik’s Cube… every time you think you’ve got a side figured out, somebody else twists it up, and you have to redo it again.