Sleepwell: From Licence Raj to a brand to reckon with

Mattress maker Sheela Foam's high growth in an underpenetrated market has pushed Rahul Gautam, the chairman and managing director, up the rankings of the Forbes Billionaire's list 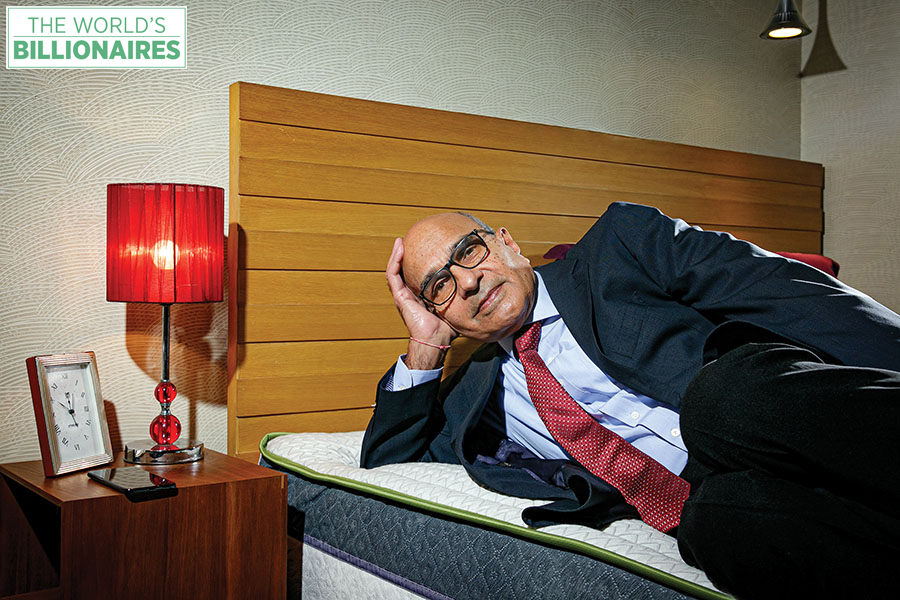 Rahul Gautam, chairman and managing director of mattress-maker Sheela Foam, best known for its Sleepwell brand, recounts how his late mother started the business back in 1971. She was 39 at the time, widowed and had two young teens, including Gautam, to care for. “She had been a housewife up until then and it would have been the order of the day to remain one,” says the 69-year-old. But she was determined to reverse her misfortune. The army rehabilitation plan enabled her to obtain a licence or permit to do business—the Licence Raj prevailed, and her husband had been a devoted army man. She took it even though she had no business connects or capital.

She found a financial partner and with some help from her father, a diplomat, she established Sheela Foam, her namesake, to manufacture foam. From a single, humble factory in Uttar Pradesh’s Ghaziabad, the business has grown to become a market leader with enormous brand recall, deep distribution and financial results to boot: Revenue from operations stood at ₹1,690 crore in FY21 compared to ₹1,755 crore in FY20 on account of Covid-related disruptions, while profit after tax increased to ₹181 crore from ₹166 crore during the same period.

Gautam, who was 15 years old when his father passed away, went on to study chemical engineering at IIT-Kanpur and topped it with a master’s degree in the same area from the US, before joining the business in the early ’80s and steering its fortunes through liberalisation in the 1990s. The listed entity has not only generated enormous wealth for investors—the stock rose by 60 percent in one year—but also for Gautam, who is ranked 1,645 on the 2022 Forbes World’s Billionaires List with a net worth of $1.8 billion, up from rank 2,524 in 2021.

“Even after my mother obtained the licence, business was slow… there were lots of hurdles and setbacks. It would have been easy to sell the licence for ₹1 lakh to ₹2 lakh at that time and enjoy life. But we chose not to. That decision to hold on, and not sell off, I would say, was an early turning point for us,” recalls Gautam. Dressed in a crisp white shirt, he is dignified and articulate—a nod, perhaps, to his army upbringing.

From the outset, Sheela Foam was relentlessly focussed on creating super quality products, says Gautam. In the mid-1990s, it launched the Sleepwell brand of mattresses. Because they used in-house formulations of foam—unlike other brands that purchased it from third-party vendors—the mattresses stood out, says Gautam.

Moreover, unlike the competition which sold mattresses through multi-brand outlets (MBO), Sheela Foam developed, from the beginning, a network of exclusive brand outlets (EBO) run on an asset-light, franchise model. Today the brand has a presence across some 7,000 outlets in India, of which 5,000-plus are exclusive franchise outlets that only sell Sleepwell mattresses—Sheela Foam’s premium offering. The remaining are MBOs that sell the company’s value offerings Starlite and Feather Foam.

Contrast that to rival Kurlon, a private company that has a presence in 1,500-2,000 exclusive outlets, according to reports, and generated revenues of approximately ₹1,100 crore in FY21. “An EBO is like a branding point for a company—equivalent to, or even bigger than, a hoarding. It carries the entire assortments of a brand’s offerings and the exclusivity means that customers can’t make price comparisons like they would in a multi-brand outlet. Hence, conversions tend to be higher in EBOs,” explains Manoj Menon, head of research and consumer analyst at ICICI Securities. 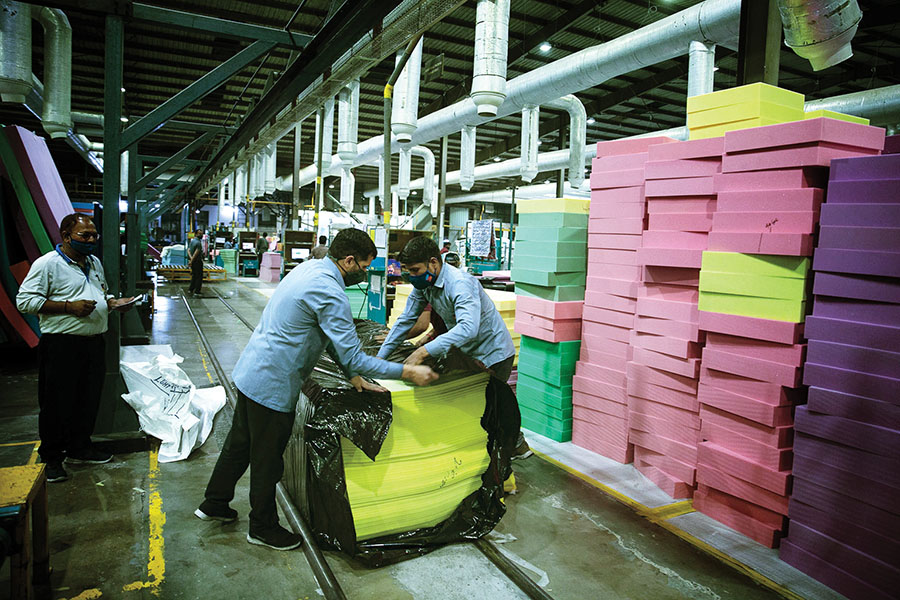 Sheela Foam’s manufacturing plant in Delhi-NCR. The company gets 81 percent of its revenue from home comfort products, of which the mattress line is a big part Image: Madhu Kapparath

Sheela Foam’s branding and distribution prowess over the years have helped convert the ₹20,000 crore, largely informal mattress market, into a more formal, organised one.

The company has captured around 25 percent of the organised market, according to industry experts, while Kurlon has about 20 percent or so. “The headroom to grow is huge,” says Gautam.

Today, Sheela Foam gets 81 percent of its revenue from home comfort products, of which the mattress line is a big part. The remaining 19 percent comes from technical foam, which is used in the automotive industry, industrial sound absorption systems and footwear.

Alongside its thrust on distribution, Sheela Foam has 11 manufacturing plants spread across the country. Given the bulky nature of mattresses, this helps reduce the logistics costs and respond faster to dynamic market requirements and customisation requests, says Menon. “It’s a clear competitive advantage.”

The pandemic opened new channels of business and fortified others. Sheela Foam’s SleepX brand, developed exclusively for ecommerce channels, registered revenues of ₹55 crore in FY21, up by 74 percent over the previous year.

Exports too have grown handsomely, says Gautam, thanks to the ‘China Plus One’ strategy followed by companies in the US and Europe to minimise their dependence on China ever since Covid disrupted their supply chains.

The voluminous nature of mattresses meant that prior to Covid, Sheela Foam’s exports were limited, explains Gautam. He says, “China had figured out a way to compress a mattress into a small box so that it could be easily shipped. It was the primary exporter to the US. Now we have also figured out this ‘bed in a box’ concept and our exports to the US have grown considerably,” says Gautam. This has prompted the company to set up a factory near Mumbai from where containers can be easily shipped.

While inflationary pressures and raw material price volatility –TDI and polyrol used to make foam can be traced back to crude oil—are a reality, they are so for the short to medium term. Over the long term, however, with an underpenetrated market, a brand that evokes trust and a deep distribution network, Sheela Foam is set to soar. Says Gautam, “We’re still far away from where we want to be.”

Tweets by @forbesindia
Sri Lanka tea exports lowest in 23 years hit by fertiliser ban, Ukraine war
122-year record: Why is it so hot in India this summer?