Financial discipline and rapid growth has been a potent combination for Minda Industries. And at $2.4 billion, its chairman, Nirmal Minda, is among India's richest auto component billionaires 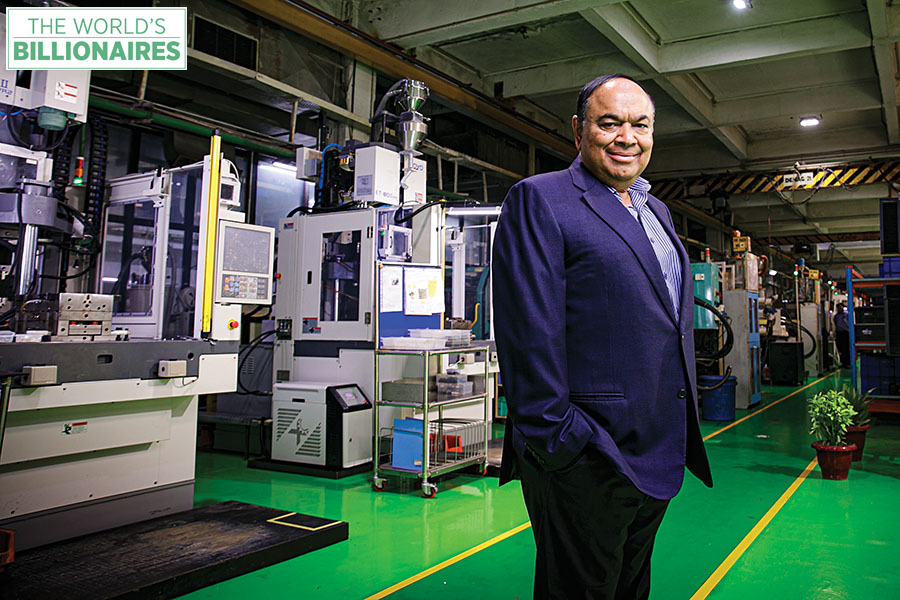 The auto industry had seen three years of healthy growth in 2017. Sales had moved at a steady 12-15 percent a year, commodity prices were benign and margins were at decadal highs. As such, there was no reason for anyone in the industry to look for new growth areas.

Not so for Nirmal Minda, the 63-year-old chairman of Minda Industries. Always on the lookout for new areas, his team noticed that the only alloy wheels available in India were imported from Indonesia or China. Priced at between ₹10,000 and ₹15,000 per car, the product had a market size of ₹2,000 crore and yet, there was no Indian manufacturer. This was not an insignificant business, but none of his rivals had decided to enter it.

Five years on, growth for the industry on account of slowing demand and a shortage of semiconductors has been hard to come by. But Minda has grown sales by 13 percent a year during this period. Alloy wheels contribute about ₹1,000 crore or 12 percent to the ₹8,100 crore topline of Minda Industries, which is also present in lighting, switches, acoustics and seating. While this was an opportunity any of his rivals could have tapped into, they didn’t.

It’s this growth mindset that has prompted the market to ascribe a premium valuation to Minda Industries and debuted Nirmal Minda with a net worth of $2.4 billion on the annual Forbes list of the world’s billionaires. Unlike other auto ancillary companies, which usually trade at an earnings multiple of 20 times (this multiple could also be on account of the fact that profits are depressed), Minda Industries commands a 75 times multiple as the market is confident of its continuing growth in profitability.

Minda is hardly resting on his laurels. He’s working to position the company for the upcoming electric vehicle (EV) opportunity. In December 2021, the company entered into a joint venture with Germany-based FRIWO AG to manufacture EV components. “Except two products, all our products are engine-agnostic,” says Minda, pointing out that for EVs, the group would have a potential kit value of ₹50,000 per car. Technology obsolescence has been a key pain point for investors in the auto ancillary space and the company is doing every bit to address that concern.

Minda got his start in late 1974 as a supplier to Hindustan Motors and PAL (Premier Automobiles, the maker of Fiat) as well as after-market products. He describes those days as “difficult” with him having to make trips to customers to get orders and to be paid. The company did an annual business of ₹7 lakh per year and it continued that way till the first wave of foreign joint ventures (JV) in the Indian market came in the mid-1980s.

The most successful of these joint ventures was between Maruti and Suzuki, and it gave birth to a generation of auto millionaires and later billionaires. Motherson Sumi, Sona Koyo, Rico Auto, Amtek Auto (now defunct) and Sundaram Clayton all got their start then, and went on to become billion-dollar enterprises. 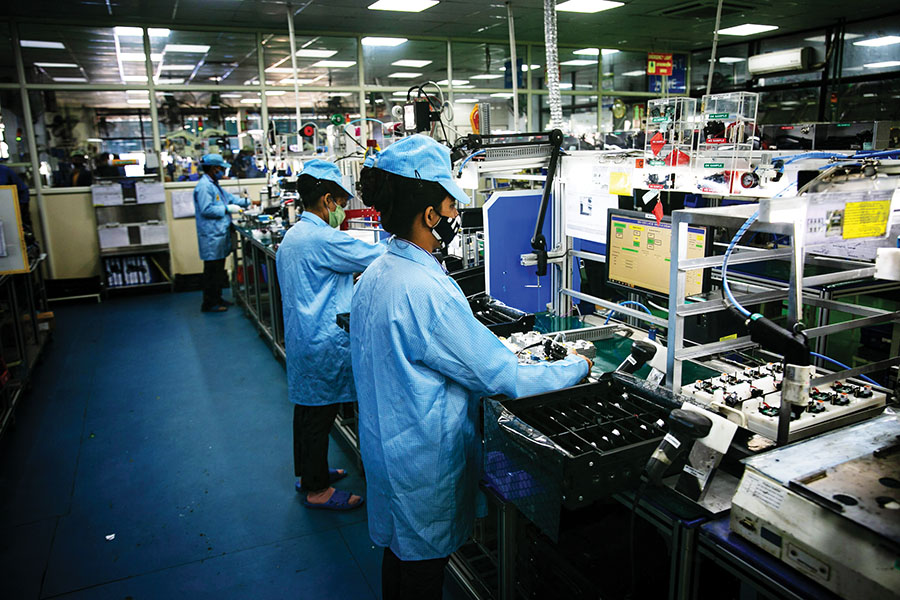 Minda Industries is present in lighting, switches, acoustics and seating among others Image: Madhu Kapparath

Minda also started supplying to Maruti and points to that as an inflection point in the business. “We faced a lot of quality issues,” he says. It was then that they got their first licence from Tokai Rika for making electronic components and automotive switches. This was later converted into a JV and supplies to Maruti Suzuki and Toyota Kirloskar Motor.

It was during the early 1990s that Minda began to emerge as a preferred supplier. Auto companies—mainly Maruti Suzuki at that time—would identify companies they saw potential in and encourage them to travel to Japan to learn about concepts like zero defects, just in time, kanban and kaizen. Minda spent two months on the shop floor in Japan and saw first-hand the implementation of these concepts.

What this did in the 1990s was transform the auto component industry into one with world-class quality standards and enabled it to lay the groundwork for exports. In 1998, the brakes division of Sundaram Clayton became the first winner of the Deming Prize for Total Quality Management. Since then, multiple Indian companies—from Mahindra & Mahindra to Rane Brake Lining and Asahi India Glass to SRF Limited—have won the award.

For Minda and the UNO Minda group that he headed, this meant multiple JVs in areas as diverse as suspension systems, switches, fuel caps, lighting, steering wheels, infotainment systems and horns, among others. In all, the group has 71 manufacturing plants globally and 23,000 employees.

For much of the 2000s, Minda Industries was a forgotten company in the markets. Its stock never commanded the valuations that listed peers like Motherson Sumi or any of the Sundaram group stocks had. There were two reasons for this. First, the Uno Minda group had a lot of JVs and subsidiaries that were outside the listed entity, and as such did not show up in their financials. Second, the auto industry in general only started receiving a valuation premium around the 2010s. Before that, infrastructure, pharma and IT were the flavours of the decade. 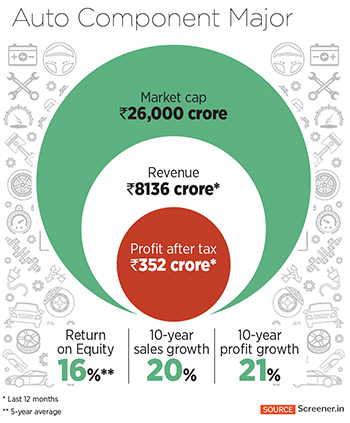 Starting 2015, Uno Minda started incorporating its group companies into the listed entity, Minda Industries. From a governance perspective, this was the right thing to do. “If you are to manage a company more effectively, it is difficult to manage it outside the listed entity,” says Sunil Bohra, executive director and group CFO at Minda Industries. All these mergers were done at book value and that was something the market took positively. He points to a recent instance where a merger of a subsidiary was done at a valuation of ₹25 crore even when it was making a ₹17 crore profit and could easily have been incorporated at a higher value.

“There was also a clear thought process on creating value for all stakeholders, including minority shareholders,” says Ajay Garg, founder and managing director of Equirus Capital—an investment bank—who has worked with Minda on several transactions, including a recent QIP (qualified institutional placement). He points to the fact that the management team has an employee stock option plan and this is not something one hears of in the auto component space.

Minda’s growth has also come about with a lot of financial discipline. Bohra points to the 30-30-30 philosophy that the group employs. For any product that it wants to get into, Minda must be able to reach a minimum 30 percent share of business and have a 30 percent of share of customers they are servicing and in the third year of operations, they should have 30 percent return on capital employed. Minda strives for a 20 percent return on capital employed for the entire company as at any time, there will always be some businesses in startup mode. Combine financial discipline and rapid growth (sales and profits have grown at 20 and 21 percent respectively in the last decade) and it becomes a potent combination.

Unlike rivals, Minda has had a cautious approach to both acquisitions as well as expanding abroad. The company believes that there is no cost advantage in manufacturing overseas and so 84 percent of its sales comes from India. That could be one reason for the high multiple the market accords it due to the higher terminal value of the business, says Garg of Equirus.

Recently, Minda Industries took a step in positioning the business for the future. It tied up with FRIWO AG to manufacture components for EVs. Other than the body, motor and tyres, the company plans to manufacture crucial components like the entire drive chain, the battery management system, seating, lighting and telematics with a total kit value of ₹50,000 per vehicle. For now, the plan is to generate revenues of ₹1,500 crore in the next four years from this business.

Despite the recent slowdown in sales, Minda continues to be bullish on the sector. He points to the fact that commercial vehicle sales are doing well and car sales are down on account of a shortage of semiconductors. Two-wheeler sales will take some time to recover on account of depressed rural incomes and the fact that a lot of people are still working from home. By 2030, he expects car sales to be 6-7 million units and two-wheeler sales to cross 30 million units a year. The company expects to double turnover in the next four or five years and plans to grow at 1.5 times the industry growth rate. If it gets there, its premium valuation should continue.

At 63, Minda has no plans to slow down and has committed to being with the company till at least the age of 70. Still, well-thought-out succession plans are in place should anything untoward happen and a successor has been identified. As he spends time with his grandchildren, playing cards and watching movies, he admits that the journey has been dream-like. But even today when his market cap has reached ₹26,000 crore, he goes by a simple mantra—‘the customer always comes first’.

Tweets by @forbesindia
Virus might be behind mystery child hepatitis cases: US agency
ISMC to invest $3 bln for chip plant in India; Amazon cuts back paid Covid-19 leave in the US; Rise Capital enters India