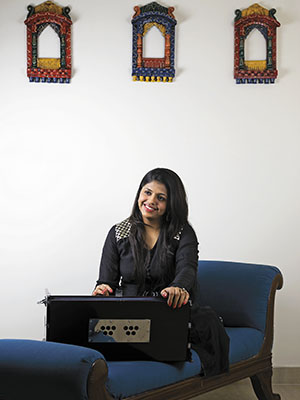 “Why do you do this for us?” Or “Are you blind?” Such questions are commonplace for Upasana Makati. People are curious to know why would someone, after studying communication at University of Ottawa, Canada, quit her first job (in 2012) to ensure that the blind in India have something to read in Braille English.

It was her “calling”, she explains, and it came to her one night in March 2012. “It was at the peak of my frustration. I was not satisfied with my public relations job,” Makati says. “I was reviewing how my day started and I suddenly got a thought on how would the day start for those who could not see. What would they be reading?”

A Google search did not reveal much. A meeting with a National Association for the Blind (NAB) director showed there was little on offer in India, which was home to the world’s largest population of the blind (15 million). The closest they have is a periodical in Hindi, run by Reliance Foundation (part of Reliance Industries which owns Network 18, the publishers of Forbes India).

By May 2013, Makati launched White Print—India’s first monthly English magazine in Braille. Help came from the NAB, which prints this 64-page monthly, packages it and distributes it to its entire database. While Makati sources content from contributors, she is often the writer and editor of several articles, which range from travelogues and world affairs to inspiring tales and short stories.

By December 2015, White Print had 400 subscribers, up from 200 a year earlier; revenues are generated from advertising by some of India’s top corporates. Makati is now writing a series of basic books in Braille for kids. Tactile image printing has also been planned for her magazine.

Anthony Vipin Das, an eye surgeon at Hyderabad’s LV Prasad Eye Institute, says: “As a doctor treating the visually impaired, there is a limit to what we can do. White Print means a lot more to those we cannot do a lot for…it is an attempt to complete the circle.”


This profile is part of the 2016 Forbes India’s 30 Under 30 project, which celebrates the talent and promise of India's 30 youngsters under the age of 30.