How Sudhin Choksey carved a niche for Gruh Finance

With his decision to stay focused on low-income home buyers, a profitable segment with a consistent trajectory of growth, Sudhin Choksey has carved a niche for Gruh Finance 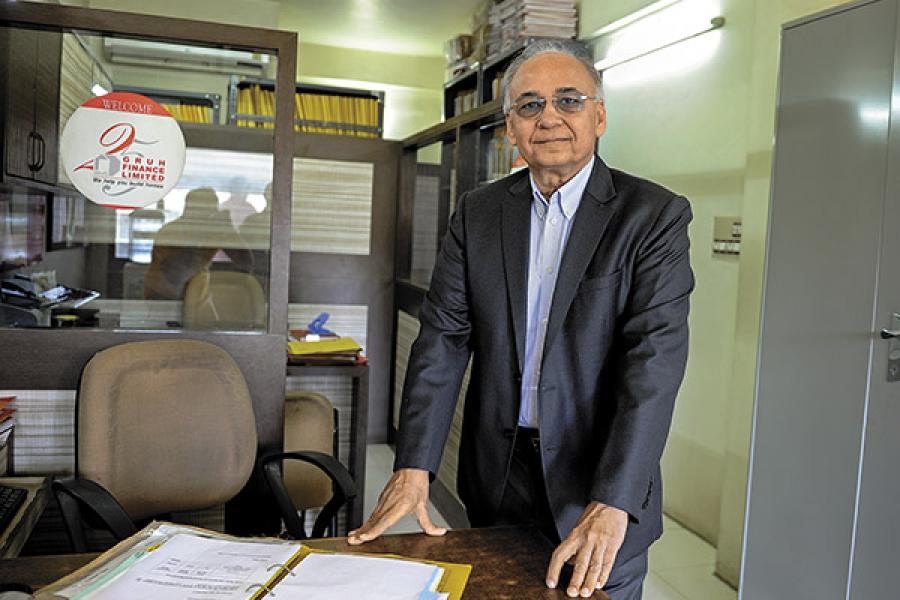 In 1998, when Sudhin Choksey took over as the CEO of Gruh Finance, the company was in a financial mess. For Choksey, the reason was not hard to see; correcting it, though, was going to take the better part of the next five years.

Founded in 1986 by the late HT Parekh—who also established the financial conglomerate HDFC—Gruh Finance’s initial mission was to provide housing loans to low-income people in small towns. But in the years preceding Choksey’s elevation, the company had strayed from its initial mandate. In addition to making mortgages available to the lower end of the pyramid, Gruh had ventured into allied areas like providing construction finance to developers.

So it was hardly a surprise that the real estate crash of 1994-96 hit the company hard. Developers stopped making interest payments even as home sales dipped, resulting in no cash flows. It was then that Choksey, 62, who describes himself as a “hands on” manager, got into the act.

Nearly two decades later, the results are for all to see. Gruh Finance, a subsidiary of HDFC, has established a niche for itself in the housing finance sector by providing small-ticket home loans in small towns and cities. It has also developed its own model to assess the credit risk of people without regular incomes.

In the process, the company has grown its revenues and profits at a CAGR of 24 percent and 17 percent respectively, in the last five years. Its stock price has also grown at a compounded annual rate of 47 percent in the same period. These numbers alone vindicate the changes effected by Choksey.

Staying true to fundamentals
One of Choksey’s first steps after assuming charge at Gruh was to refocus on the founding mission of the company—providing home loans to people with small incomes and living in small towns. For this, he realised Gruh had to revamp its branch model.

“I realised that the branch model of HDFC would not work in small towns,” he says. On a visit to a Gruh Finance branch in Mehsana, on the outskirts of Ahmedabad, Choksey noticed there were 11 employees (two each for marketing, legal, collections and so on)—a large number in a branch that had little business. “The branch structure had to be changed and this could only be done by redeploying the staff,” he says.

Across the smaller towns of Gujarat, new branches managed by just two people were opened. With resources more efficiently deployed, Choksey now turned his attention to perfecting his product offering and tailoring it for the bottom of the pyramid. 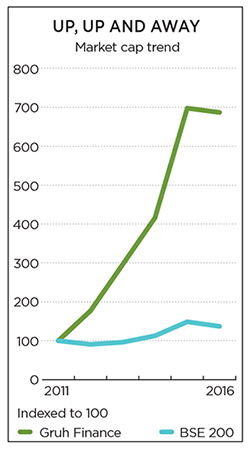 Getting the product right
While redirecting the company to its founding principles, Choksey realised that Gruh was missing out on an entire segment—those without regular incomes and, therefore, no salary slips.

Providing home financing to this lot is something that had not been attempted before and was fraught with high risk. Choksey narrates the story of how he went about sanctioning a loan to a mojari (handcrafted footwear) maker in Usmanpura in Ahmedabad. He sat with him and assessed how many pieces of mojari he made in a day. Based on that, Choksey judged how much he would be able to pay as installments and sanctioned a loan of Rs 2.5 lakh. “Initially, my staff was unsure about making credit assessments like this. I had to do the first few myself,” Choksey admits.

Convinced, Choksey launched Gruh Suvidha, a product for people without income proof. He devised the scheme in such a way that it came with negative amortisation, i.e. the monthly installments of the borrowers would rise over time. Choksey reasoned that the rising incomes of his borrowers would offset their higher outgoes on installments. (This has to be distinguished from US sub-prime loans where interest rates are increased during the tenure of the loan. In Gruh Suvidha, interest rates remain constant, just the initial monthly installments are kept low.) It was later discontinued after auditors raised an alarm. Today, in addition to Gruh Suvidha, the company also has loans for those with income proof (Gruh Suraksha), for those seeking to set up shops and offices (Gruh Samruddhi) and for home renovations (Gruh Sajavat).

Managing risk
While it got its target market right, Gruh realised that assessing credit risk was equally important. This was a challenge Choksey’s team took up in earnest, despite the lack of precedence.

They came up with a 23-point guideline for loan assessments. When a customer approaches a branch for a loan, the staff asks questions about the person’s profession, family, past credit record and future liabilities. These 23 points are entered into a system that juxtaposes it with information from creditors with similar records, and instantly arrives at a decision on whether the loan can be sanctioned and at what rate. More importantly, this also removes any arbitrariness from the system. “This very clearly calibrates the risk and, in time, has become a very scientific model,” says Suresh Iyer, general manager, operations, at Gruh Finance. The model has also been validated by Crisil.

“One large risk we face is that of fake property documents,” says Manish Gandhi, regional manager, Gujarat. To counter this, Gruh forbade managers from accepting laminated copies. “If you feel the paper, you usually get a good idea of its authenticity,” he explains. A simple solution, yet something few companies practice.

Branching out
While the early 2000s were spent in getting the company back on its feet, it was in the latter half of the decade that Gruh began to expand beyond Gujarat. The company currently has 179 retail offices across 10 states, including Karnataka, Rajasthan, Maharashtra and Chhattisgarh. It recently entered Uttar Pradesh with an office in Lucknow.

While Choksey is confident that Gruh’s business model is replicable, he is also acutely aware that only local staff can handle local business. “When we opened in Karnataka we did not send anyone from here [Gujarat],” he explains.

Decentralising
One of the hallmarks of success in the mortgage business is quick decision-making. Gruh was able to achieve that by granting autonomy to its branches to make independent credit assessments and sanction loans up to Rs 1 crore. Only waivers of fees or interest payments were vetted by the head office. This is a far cry from other housing finance companies where even routine approvals go all the way to the regional office.

Besides, at Gruh, the head office determines strategy, and execution is left to the local units. Gruh employs no collection agents. “If you sanction a loan, you are also responsible for the recovery in case something goes wrong,” explains Iyer.

Staying put
For any small mortgage business, venturing into loans of higher ticket sizes would be the natural course of evolution. But Choksey was clear that it would dilute focus and also expose Gruh to competition from the likes of Indiabulls Housing Finance, Muthoot Finance, HDFC and also state-run banks like State Bank of India and Bank of Baroda.

Being a smaller company, Gruh would never be able to match the interest rates of large mortgage companies. (Currently, it offers loans at an interest rate of 9.75 percent versus 9.45 percent for SBI). The focus has helped it to not only carve out a niche but also cater to a segment where growth has held up.

Focus on returns for investors
Even after Gruh was on a strong footing, it took time for investors to discover the company. But this did not bother Choksey.

He never attended investor meets, and made running the company his sole focus. (He once asked a headhunter, who tried to poach him, to leave his office.) Yet, he was always available to meet individual investors who made the trek to their Ellisbridge office in Ahmedabad.

For much of the 2000s, the business was available at a reasonable valuation while the company clocked above 20 percent revenue growth every year. It was post the 2008 financial crisis that the company’s stock price rose rapidly, resulting in a 100-time appreciation from early-2000 levels.

Barry Sahgal, the general partner of New York-based Zaara Management, who identified the stock in the early 2000s and has been a patient investor (in his personal capacity) since then, has great respect for what Choksey has been able to execute and checks with him a few times a year on how the company is expanding its branch network, building middle management and monitoring balance sheet risk.

“Money is made by buying fabulous companies that are consistent growers despite high valuation multiples because they deliver predictable above-average financial metrics,” says Sahgal. He cautions that this is not a stock for someone seeking a quick trade.

Sahgal had met Keki Mistry, vice-chairman of HDFC, at a conference in New York and asked him about the company. His response: “It’s a wonderful company I wish I could buy more [of the stock] myself.”