Conspiracy: It has all the right ingredients - sex, lies and videotape

Although you know who gets killed in the end, you want to know the inside dirt 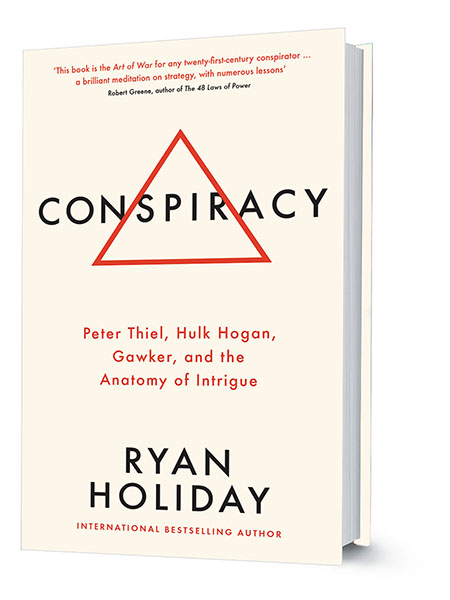 The biggest problem with Ryan Holiday’s seventh book, Conspiracy, is that you already know who gets killed in the end. But knowing the end is also probably the reason you would pick up the book in the first place. Because you know who killed who, even why, and now hope to learn how. You want the inside dirt.

You already know that American wrestler Hulk Hogan took gossip site Gawker to court in 2012 for publishing a video of him having sex with his best friend’s wife—the video was made without Hogan’s knowledge, and published without his permission—and that the court unprecedentedly ruled in favour of Hogan, making Gawker go bankrupt. You have also learnt that Silicon Valley billionaire Peter Thiel—creator of PayPal, and one of Facebook’s first investors—bankrolled Hogan’s lawsuit because he wanted to ruin Gawker and its editor Nick Denton for outing him as gay in 2007. Revenge had been best served—cold.

Now is your chance to learn how a few people came together—some by design, others by accident—to do what many had dismissed as impossible: Bringing Gawker to its knees for the vicious, invasive, unsubstantiated and damaging content it pushed for years under the pretext of journalism.

Conspiracy is well researched, and mostly well written. There is a lot of “access” you might think, given the interviews of Thiel, his allies and employees on the one hand, and Denton, his allies and (former) employees on the other. But that, of course, is because Thiel and Denton approached Holiday separately to give him their view of things. But, no harm done, you get to hear them tell you why they did what they did—or rather, what they want you to know about why they did what they did. Still, the ride is fast and exciting enough. And you go along just to witness the end. Because the end, even when you know it, is still the most exciting part.

What gets tiresome are the numerous references to historical characters and events—whether it be ancient Rome, or Julius Caesar, Hannibal, Sparta, Captain Sherman and the Yankees, or Nixon and the Democrats—that Holiday makes to highlight the facets of a conspiracy. And then there’s the book’s second drawback: The name itself, because there is no real conspiracy here. Conspiracy is the stuff of The Odessa File and The Fourth Protocol. Holiday’s story is more about dogged perseverance; Gawker and Denton dug their own graves, and Thiel simply waited for a chance to push them in. And Holiday is no Frederick Forsyth.

Conspiracy is the kind of book that will give you a lot of snippets to exclaim over and chat about at cocktail parties. It has all the right ingredients after all—sex, lies and videotapes.

Tweets by @forbesindia
Ten interesting things we read this week
Calories: The good, bad and ugly