Amrut is the preferred whisky for the rich elite overseas 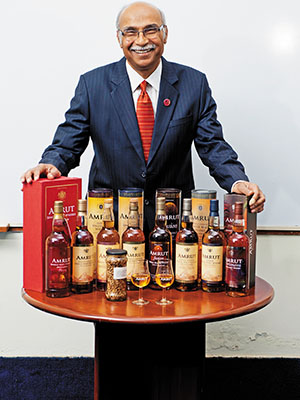 In August 2002, Rakshit Neelakanta Jagdale, an MBA student in Newcastle University, UK, walked into Pot Still, a 145-year-old pub in Glasgow, with a bottle of Amrut Indian Single Malt Whisky as part of a market research project. The pub, at the heart of the Scottish capital, was the drinking hub for many tourists and served some of the best whiskies in the world. Would an Indian brand hold its own here?

Rakshit tried to test the tipple on Ken Stori (now deceased)—the Pot Still owner and a whisky connoisseur himself. One drink and Stori was floored. He invited Rakshit back in the evening, promising to serve the whisky to his special guests.

Stori’s guests lapped the obscure single malt from India believing that it was a rare whisky aged for 12 to 15 years from an old, unknown Scottish distillery. Perhaps prophetic, given that in a decade’s time, this single malt, brewed at a distillery located near Bangalore and 8,301 km from the world’s Scotch capital, would go on to sell over 15,000 cases a year across 39 countries. (Typically, a case is defined as 12 bottles of 750 ml for distilled spirits.)

“After that market survey in 2002, it took us nearly two years to conform to the packaging standards of the European Union. We officially launched Amrut Single Malt in an Indian restaurant in Glasgow called Cafe India on August 24, 2004,” says Rakshit, executive director, Amrut Global—Luxury Malt and Spirits, a division of Amrut Distilleries Ltd. Later, it was launched in markets across France, Germany, Spain, the UK and Italy.

But Rakshit, 36, points out that it was the foresight of his father Neelakanta Rao Jagdale that led to the launch of Amrut Single Malt, a premium luxury offering, in international markets. For Jagdale Sr, it was a deliberate attempt to prove the brand first in overseas markets. “It was a conscious decision to sell an Indian single malt to the Scots. And we continue to do that. It is the ethos of the organisation. We wanted to have a distinct identity in the international market and not just be a part of the crowd,” says Neelakanta Rao Jagdale, chairman and managing director, Amrut Global—Luxury Malt and Spirits.

His vision came to fruition when Amrut (Fusion) Single Malt, the first Indian liquor brand, was rated as the third finest whisky in the world by Jim Murray in his 2010 edition of the Whisky Bible, one of the most recognised global whisky guides. Despite Amrut Distilleries being a mass market player, its products established a niche for themselves in the global luxury whisky market dominated by iconic brands such as Glenfiddich, Glenlivet, Laphroaig, etc.

Entering the luxury space might seem an unusual step for a company that mostly caters to a larger audience, but Neelakanta Rao is quite comfortable with this marriage between mass and luxury. His inspiration: The Tata Group, which has products that cut across socioeconomic groups. “Today, the Tatas are associated with all segments and not just luxury. I believe in their philosophy. For me, it is about customer satisfaction, aspiration and fulfilment for each of our products,” he says.

Neelakanta Rao says luxury is a matter of perception. “It is when the expectation of the customer is surpassed even at the highest price paid.” It’s this passion to meet the highest expectations that drives the 61-year-old, even when the luxury segment accounts for barely six percent of the company’s topline.

Vikram Achanta, co-founder and CEO of Tulleeho Wine Academy, a beverage training and consulting firm, feels it is a smart strategy to focus first on international markets and leverage the feedback in India. “The brand has also got some excellent feedback globally,” says Achanta. “What makes it a great product is that it is born from the entrepreneur’s passion and not just a business proposition.”

In the international markets, Amrut sells 15 variants of single malt whiskies across leading retailers such as Harrods in London, Selfridges across the UK, British supermarket chain Waitrose and Park Avenue Liquor Shop in New York. “We decided to stock Amrut when it was introduced in the US to show our customers single malts from outside the usual whisky-making countries. Amrut is starting to gather a following. The response, especially for the Amrut Fusion, has been very positive,” Jonathan Goldstein, vice president, Park Avenue Liquor Shop in New York, says in an email response to Forbes India.
Goldstein adds that Amrut will face competition from single malts produced by upcoming whisky nations like the US, Japan and Sweden, but rates it very well when compared to other non-Scotch brands. “This will continue to grow as people become more familiar with malts from India.”

For FY14, Amrut Distilleries posted  revenues of Rs 220 crore, while for the current fiscal it expects to record a topline growth of around 10-15 percent. Over the last five years, the company had a compound annual growth rate (CAGR) of 10 percent.

Deepu Paul, owner of Mumbai-based music company M&M Music, feels it is the smoothness of the whisky that forced him to change his loyalties from Johnnie Walker Black Label to Amrut Fusion Single Malt. “At a friend’s party three years ago, I tasted Amrut for the first time. It was extremely smooth and I loved the taste. It didn’t give me a hangover the next day. Now it’s a regular at all my house parties. It is not widely available in Mumbai and the Northern states, which I feel is a drawback for the brand,” says Paul.

Liquor experts are of the opinion that the company has not been able to meet the demand and that it needs to ramp up its distribution network in the domestic market. “At present, they are primarily in Bangalore, but they need to be strong in markets like Chandigarh and Mumbai and enter major metros like Delhi. They might not have the volume for that,” says a Bangalore-based liquor consultant.

However, among the Indian single malt makers, Amrut has a first-mover advantage. Amrut’s Indian competitors include Paul John Single Malt from Bangalore-based John Distilleries Pvt Ltd, which was launched in London in October 2012. “If Amrut can keep its capacity (volume) growing, then it should be able to hold on to its advantage. If it is unable to ramp up its capacity simultaneously in different markets, then it might lose out to a new entrant,” says Achanta.

Amrut, which is looking to expand its luxury malt and spirits division in future, feels its major challenge will be to maintain the quality of the product. “Most of the ingredients are naturally processed,” says Neelakanta Rao, “so it is a challenge to produce a consistent quality every time.”

But that is a problem for another day. Till then, it’s time to raise a toast to a homegrown achiever.

Tweets by @forbesindia
Snapshots of the fortnight (October 15-28, 2014)
Despite a perceived slowdown in the art market, prices have been rising