Vivo and Xiaomi look to gatecrash into the luxe bastion of Apple, Samsung and OnePlus 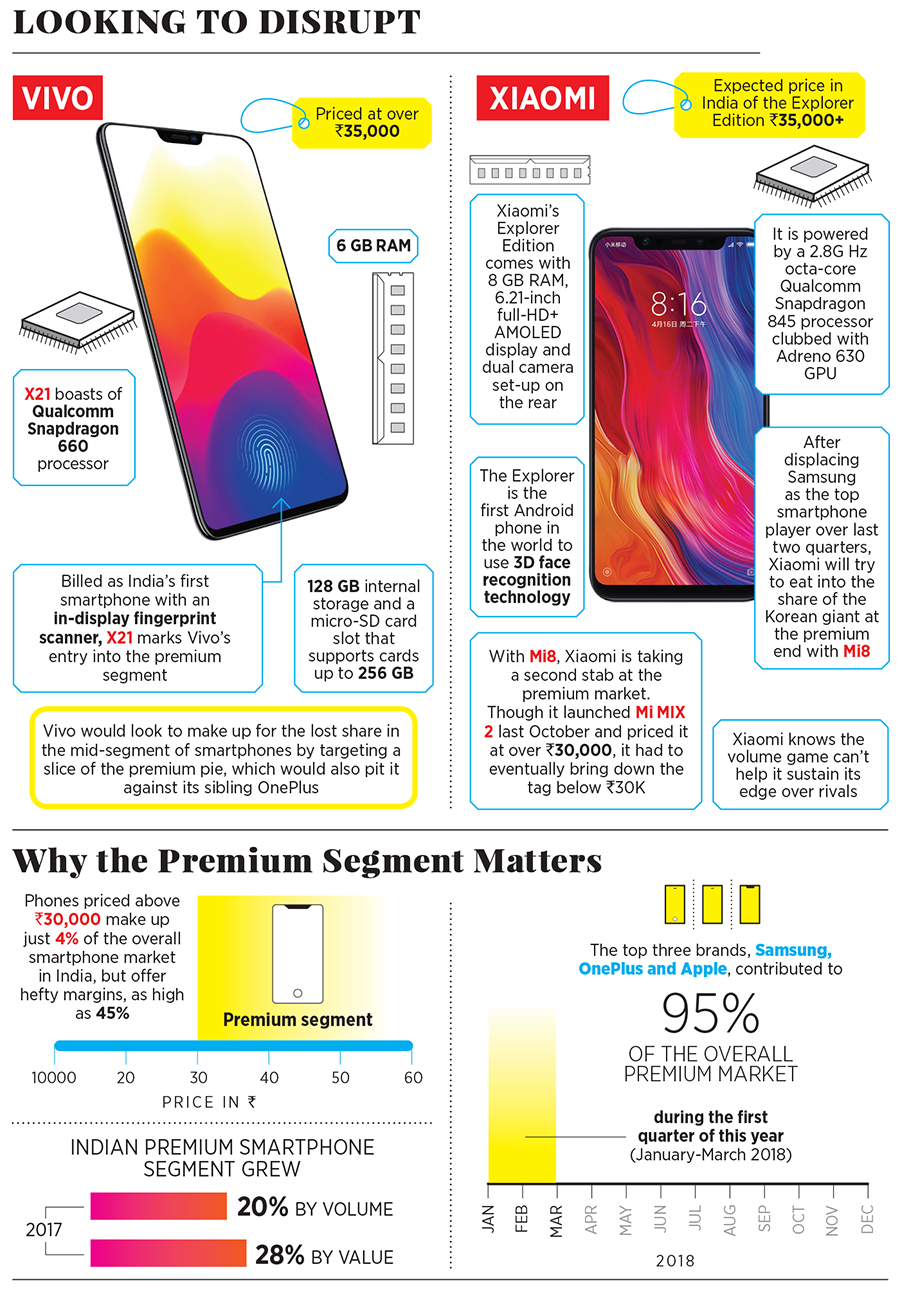 The Explorer Edition, Xiaomi claimed when launching the Mi8 in China on May 31, will be the first Android phone in the world to use 3D face recognition technology—a feature similar to what Apple uses in iPhone X for Face ID.

Reportedly priced at CNY 3,699 (₹39,000 approximately), Xiaomi—dubbed as China’s Apple—is making a bold attempt to crack the premium smartphone category with the Explorer Edition and take on elites such as Samsung, Apple and OnePlus. The model might get launched in India soon given the fact that India is the second biggest market for Xiaomi after China.

Vivo, another Chinese player, is also attempting to carve a niche in the premium category with its X21 model in India.

The premium category—handsets priced above ₹30,000—is where the margins are (as high as 45 percent compared to 5-7 percent at the entry level and 10-12 percent at mid-segment) and is likely to drive the mobile replacement market.

Though the premium segment makes up just 4 percent of the estimated $20-billion smartphone market in India, it’s growing fast. The segment, pointed out Counterpoint in a report early this year, grew 20 percent by volume and 28 percent by value in 2017. During the first quarter of this year (January-March 2018), the top three brands—Samsung, OnePlus and Apple—contributed to 95 percent of the overall premium market.

Handset analysts contend that after consolidating their respective positions in the entry and mid-segment of smartphones in India, Xiaomi and Vivo are now trying to eat into the market share of the top three players in the premium segment.

“Wafer-thin margins and intense competition in the entry and mid-end segment are reasons for brands to make a shift to the premium market,” reckons Shobhit Srivastava, research analyst at Counterpoint Research. Relatively lower competition, higher margins and enough space to grow will allow Xiaomi and Vivo to increase their revenues, he adds.

For Vivo, which has seen its market share halve over a year, X21 gives it a chance to upgrade and make itself more aspirational. X21, with an under-display fingerprint sensor, has differentiated itself from the offering in the segment. “Being the first one to launch such a device, it will help Vivo grab mindshare and drive up its overall average selling price,” avers Srivastava.

The game plan for Xiaomi too makes perfect sense. After displacing Samsung as the top smartphone maker over the last two quarters in India, it knows that the volume game can’t help it sustain its edge over rivals. “After having a successful run in the entry level and mid-end segment, Xiaomi looks more eager to increase overall revenues from its largest market outside China,” says Srivastava.

The going, however, might not be easy. Reason: Consumers have a strong imagery of premium brands. “Though it’s relatively easier for brands to upgrade, it’s tough for them to displace the incumbents in terms of aspirational value,” says Ashita Aggarwal, head of marketing at SP Jain Institute of Management and Research. Even if they (Vivo and Xiaomi) won’t be priced as high as Apple and Samsung, they would still carry the baggage of being perceived as an outsider in the premium category. “Ready acceptance might take time,” warns Aggarwal.

The plan to gatecrash into the premium club, point out analysts, might not affect Apple as the move is likely to take share away from Samsung and OnePlus. “The new launches pose little threat to Apple,” says Deepak Kumar, founder analyst at B&M Nxt. The ₹60,000-plus price segment is deterministically brand-driven. “This segment is unlikely to get disrupted by Xiaomi and Vivo,” he says, adding that it is the ₹30,000–₹45,000 segment that these challenger brands would be eyeing.


On the Plus Side

PepsiCo realised the magic of ‘Plus’ way back in 1998 when it rolled out its campaign with a tagline ‘Yeh Dil Maange More’. The consumer insight was simple: Users get hooked to the promise of more—aka plus—whether in abstract or real terms.

The idea of ‘more’, though abandoned by the beverage maker after the first few years, was lapped up by FMCG and retail companies, in a different avatar. One got to see toothpastes, soaps, deodorants adding ‘plus’ to their variants.

Cut to 2018. Handset makers have started doing a Pepsi. Samsung S8+ and S9+, Nokia 7 Plus, Redmi Plus... ‘Plus’ is the new smartphone lingo. Reason: The consumer insight still remains the same; users want more for less. More specs, more value and more of their phones.

It’s a win-win for marketers. “Plus is a marketing subliminal, used to advantage by marketers of both FMCG, durables and now most telecom handset players,” reckons brand strategist Harish Bijoor. What plus does to a brand or a product is give it an eternal symbol of positivity. “That is a big reason why the moment you add a plus, its positivity as a choice seems to jump out significantly,” he says, pointing out other plusses of plus: Getting more than what one has paid for.

While conceding that ‘Plus’ also makes a product look macho, Bijoor is quick to point to the flip side. The biggest minus is the claim itself: Plus. “If you brand a plus and don’t deliver, your brand falls on the count of over-promise,” he warns, adding that plus is an over-touted facet. “Brands can fall and fail on that count,” adds Bijoor.

For handset makers, and other marketers as well, that would be an unwanted plus for sure.