If Suresh Narayanan, chairman and managing director of Nestle's Indian operations, is on the Forbes India cover this fortnight, it's precisely because of the shift to rural that this hitherto urban-centric brand is making. 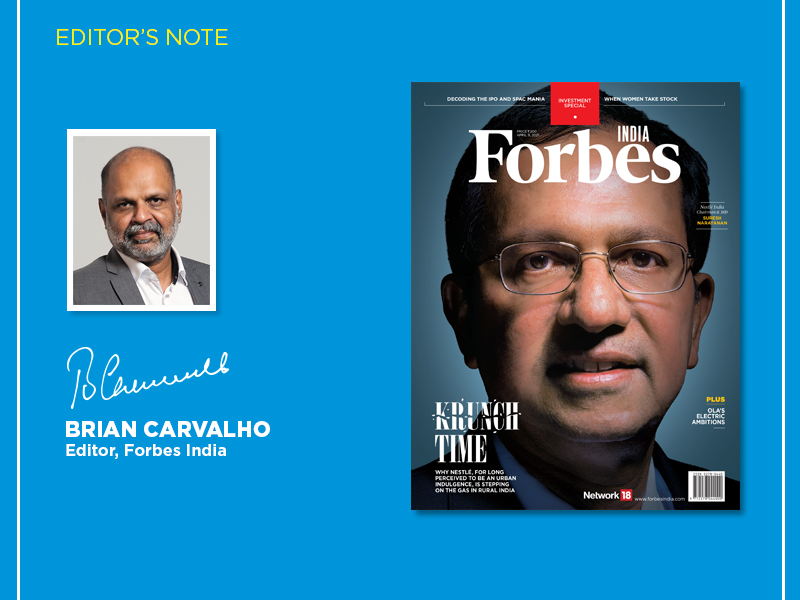 In the early ’90s, when economic liberalisation brought into India a flush of multinational consumer companies—makers of colas and cornflakes, burgers and ketchup—their target market was the much-hyped middle class. Discussions on rural markets mostly revolved around poverty alleviation.

Then, in the mid-’90s, Wharton School published the late CK Prahlad’s ground-breaking The Fortune at the Bottom of the Pyramid: Eradicating Poverty through Profits. “The problem of poverty must force us to innovate, not claim ‘rights to impose our solutions’,” wrote the then professor of strategy at the University of Michigan Business School.

Prahlad prescribed that consumers and consumer companies need to co-create solutions: “The process of co-creation assumes that consumers are equally important joint problem-solvers.” He also demolished a few myths: That there was no purchasing power, brand-consciousness and technological acceptance at the BoP, and that there were few opportunities for growth and innovation outside urban India.

In the early 2000s, Hindustan Unilever Ltd (HUL)—no Johnnie-come-lately to India, having entered in 1933—took Prahlad’s co-creation model to thousands of villages and tens of thousands of women with Project Shakti. The twin goals were to empower rural women by making them entrepreneurs; and, in the process, increase penetration of HUL’s soaps, detergents and home and personal care products. HUL now has some 1.1 lakh rural women micro-entrepreneurs in 18 states.

That’s just one of the many ways HUL has created touchpoints in much of rural India. Data suggests that its products are available in 9 million outlets all over India, 3.2 million of them directly and the rest via resellers.

HUL may have been relatively early in spotting the rural opportunity, although over the years, fast-moving consumer goods (FMCG) marketers of all hues—MNC and Indian—have hit the same trail. Rural markets today account for a third of the FMCG sector’s sales, with giants like HUL and Dabur well above the median.

Well below that average has been Nestle, at roughly 25 percent. And if Suresh Narayanan, chairman and managing director of the Swiss foods giant’s Indian operations, is on the Forbes India cover this fortnight, it’s precisely because of the shift to rural that this hitherto urban-centric brand is making. As Narayanan tells Rajiv Singh, who has penned the cover story: “A company starts to accelerate in rural markets when two things happen: Convergence of aspiration and convergence of availability.”

Could the rural push have come earlier? When Singh posed this question to Narayanan, he made the point of product relevance in rural markets. For instance, Wheel detergent or Colgate toothpowder may have gained acceptability in villages in the 1990s, but a Nescafe or a KitKat may have not been as fortunate.

That moment of relevance has come, thinks Nestle. For many reasons, the biggest perhaps being that the ‘capacity to consume’ has arrived—something Prahlad reckoned had to be created to convert the BoP into a consumer market. At the same time, villages are not as ‘media dark’ as they were in the pre-internet and smartphone era, reliant then just on audio and television access.

Nestle may well be riding on the last-mover advantage—not having to rejig a legacy distribution structure, and instead enjoying the flexibility to build one on the bedrock of ecommerce.

Tweets by @forbesindia
Ideal time to get back into IPL: Puma's Abhishek Ganguly
What can Indian SMEs learn from Germany's hidden champions?