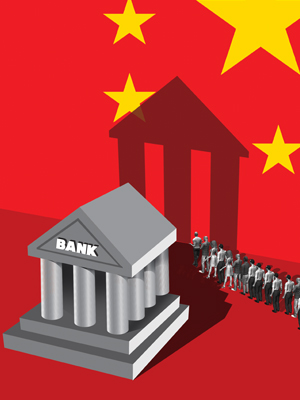 Chinese debt concerns are complicated by two structural issues—the rise in borrowing by local governments and the increasing role of the shadow banking system. Both sectors are a testament to the Chinese entrepreneurial spirit, but also point to deep problems in the country’s financial system.

Local But National...
Outside of security matters or foreign affairs, China’s provinces, regions and centrally-controlled municipalities enjoy a degree of autonomy. After the global financial crisis of 2007-08, the aggressive stimulus measures to boost economic activity required the central government to relax controls on local government spending programmes.

But, by law, China’s local governments are not allowed to borrow, requiring creative solutions with the tacit approval of Beijing. Local governments created LGFV (Local Government Financing Vehicles), also known as UDICs (urban development and investment companies). These special purpose vehicles, which are separate from but owned or controlled by the local governments, can borrow.

The LGFV generally borrows funds predominantly from banks (as much as 80 percent or more), with the remaining raised by issuing bonds or other equity-like instruments to insurance companies, institutional investors and individuals. In recent times, with pressure on banks to curtail loans, LGFV has borrowed from the shadow banking system. There are several issues around local government borrowings.

With over 10,000 LGFVs in China, the exact level of borrowings remains in dispute despite increasing scrutiny. There is concern about the quality of the underlying projects financed, which are sometimes expensive, politically-motivated, trophy ones. Many LGFVs do not have sufficient cash flow to service debt, being reliant on land sales and high property prices to meet debt obligations. The LGFVs also have significant mismatches between short-term borrowings and long-term investments being financed. With cash flow insufficient, many LGFVs now use new borrowings to repay maturing debt. About 50 percent of them have unsustainable debt levels and run the risk of insolvency.

The pathology of their financial problems is recognisable: It is a combination of excessive borrowing, capital misallocation and debt-servicing based on increasing property prices. They increase their borrowings to create larger development projects, resulting in an increase in the supply of new properties held by the LGFVs. As sales slow down and prices come under pressure, it constrains their ability to monetise assets to meet debt obligations.

The LGFVs have insufficient finance to continue, resulting in slower completion or even incomplete projects. Ultimately, they and the local governments must be bailed out or they run the risk of insolvency.

There are political complications too. Debt-financed investments of local governments helped maintain China’s growth after the onset of the global financial crisis. This was crucial in assisting the Central government to maintain social stability. Deep-seated links, systems of patronage and factional competition within the Chinese Communist Party (CCP) make it difficult for Beijing to take drastic steps to abruptly reverse policy.

An ancient Chinese proverb—Shan gao, huángdì yuan—states: “The mountains are high and the emperor is far away.” It implies that Beijing’s control over its regions is historically weak, with local autonomy and little loyalty, which means central authorities have limited influence over local affairs.

Lengthening Shadows
“Shadow banking”, a term used by US investment management firm PIMCO’s Paul McCulley in 2007, refers to a diverse set of institutions and structures used to perform banking functions outside regulated depository institutions. In recent years, China has evolved its own substantial shadow banking system, which has several layers.

There is the informal sector which encompasses direct lending between individuals and underground lending, often by illegal loan sharks (referred to as “curbside capitalists” and “back-alley bankers”) that provide high interest loans to small businesses.

The larger sector consists of a range on non-banking institutions, which are subject to various degrees of regulatory oversight. It involves direct loans of surplus funds by companies to other borrowers or trade credit (often for extended terms). It involves non-bank financial institutions, such as finance companies, leasing companies or financial guarantors.

There are also more than 3,000 private equity funds, funded in part by foreign investors. In personal finance, it encompasses micro-credit providers, consumer credit institutions and pawn shops. The largest portion of the non-banking institution sector is trust companies and wealth management products (WMPs). There are also capital markets allowing insurance companies and institutional investors to purchase debt and equity securities.
Need For Shade
The growth is driven by the structure of China’s financial system. The credit markets are dominated by four major state-controlled banks (Bank of China, China Construction Bank, Industrial and Commercial Bank of China, and Agricultural Bank of China) that focus on lending to state-owned enterprises, and government-related firms. Other businesses have more limited access to bank credit. The shadow banking sector fills this market gap.

Government regulation of deposit interest rates has also facilitated the growth of shadow banking systems. For much of recent history, bank deposit rates have been below inflation rates. Negative returns and the loss of purchasing power have led savers to seek higher available rates in the shadow banking systems. The Central government has sought to rein in runaway credit expansion by reducing loan quotas, limiting lending to specific sectors and restricting riskier transactions. This has perversely encouraged the growth of shadow banking.

Trust Assets and WMPs
Trust companies are the most important component of the Chinese shadow banking sector. They finance riskier borrowers and transactions that banks cannot undertake due to regulations. Trust assets are estimated at more than $1.8 trillion (20 percent of GDP). While this is only a small part of the total credit in China, trust assets have been growing at an annual rate of over 50 percent in recent years.

Trust companies raise money from investors which are then put in loans or securities. Investors are usually high net worth individuals or corporations that can meet required wealth standards (several million renminbi in assets). The major attraction for investors is the high returns; around 9-12 percent per annum compared to bank deposit rates (in low single digits). After adjusting for the trust company’s fee (1-2 percent of the loan value), the ultimate borrower must pay around 10-15 percent per annum for the funds, well above the 7-8 percent charged by banks.

The funds primarily finance local government infrastructure projects (via LGFVs) and industrial and commercial enterprises. Following the central bank’s decision to restrict banks’ financing of local governments and property projects, trust companies have become major providers of finance to these sectors. The high interest rates mean that the borrowers are riskier. Problems with assets supporting trust loans are well documented, most notably in the “Purple Palace”, a half-built and abandoned luxury property in Ordos.

WMPs, on the other hand, are high-yielding deposit or investment products, with a variety of seductive monikers—Easy Heaven Investments, Quick Profits and Treasure Beautiful Gold Credit. They are sold through banks or brokers to a broader investor base. Investments are typically for about six months. WMPs offer investors a return of 2 percent above bank deposits. They can be sold with or without a guarantee of the payment of interest or principal from the sponsor. WMPs invest in a variety of assets, ranging from low-risk inter-bank loans, deposits and discounted bills to higher-risk trust loans, corporate securities and securitised debt.

A central feature of China’s shadow banking sector is its relationship with its regulated counterpart. Banks may act as an agent in a loan from one non-financial company to another (known as entrusted loans). They can also sell assets to trust companies or create WMPs to channel client funds. They use undiscounted bankers’ acceptances to transfer assets to the shadow banking sector, against a partial or full payment guarantee from the issuer. Corporate bonds may be bought by trusts, which are then repackaged into WMP products for bank depositors.

China’s shadow banking system exemplifies a popular saying—Shang you zhengce, xia you duice—meaning “policies come from above; countermeasures from below”.

Tweets by @forbesindia
Bank of America's CEO has no great plans. And that's good
Michael Jackson Continues to be a Money Machine