The Cherian family, along with the Here I Am team in Bengaluru, conducted close to 25 burials a day during the peak of the second wave. Amid the distress, the young team of volunteers managed to find friendship and support in each other 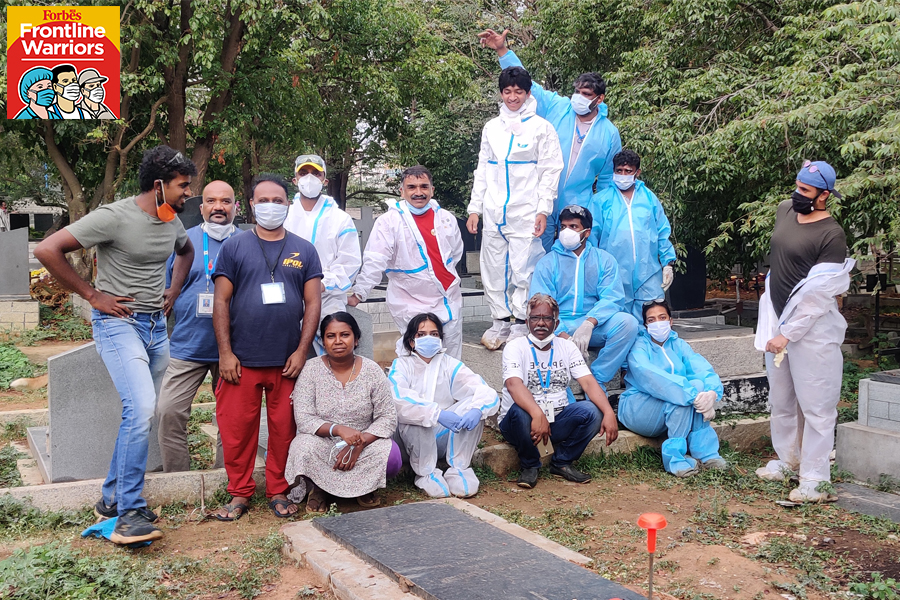 In the month of April, when Bengaluru resident Mathew Cherian (51) buried his cousin who had died due to Covid-19 at the Indian Christian Cemetery in the city, two young volunteers in their 20s assisted him with the burial. He didn’t recognise them since they were masked, but later discovered that one of them was his son’s classmate, now working with a startup, and the other was his friend’s daughter. The duo was volunteering for an initiative called Here I Am under the Archdiocese of Bangalore. Since there weren’t enough people to help with the burials, they had requested Cherian for help.The cemetery on Hosur Road has several burial grounds, Gate No 4 being one that has been set aside for Covid-19 deaths. When the second wave was at its peak, many bodies arrived unaccompanied as the close relatives were placed under quarantine. The Here I Am team volunteers to give them a dignified farewell.

So impressed and inspired was Cherian to see this bunch of motivated youngsters that he started stopping by at Gate No. 4 every day. Working with the design team of Titan Company, he would start his day by 7 am so that he could finish by 2 pm to go volunteering. “Since we have a wedding coming up in the family, there was some apprehension over my going to the cemetery every day since I could transmit the infection. So what I did was that I kept away, apart from taking all the necessary precautions,” says Cherian. On the first day, he helped with buying a box of gloves, but gradually he started getting more involved. He saw that the team was struggling with getting PPE kits. Cherian posted the requirement on Facebook and soon there were offers pouring in. Soon, he had around 100 PPE kits. Soon, Cherian was joined by his nephew Samuel Joseph (37), a pilot with Etihad Airways, his daughter Nicole (21), a student pursuing a course in social work at the St Joseph's College of Arts and Science, and his niece Dr Tina Thomas (23), who is a final year medical student at Manipal University. “I just followed in my father's footsteps, when we heard he was volunteering, we felt the need to join. My cousins Tina, Samuel, Joe, friends Adrian, Danny, Brandon, Amanda, and many others just joined to help,” says Nicole. “It is fulfilling because these families have no one to help them.” The team has grown in strength with the arrival of the Cherians. Nicole’s lecturer, Akshay Mandlik, who is the head of the Sociology department at the St Joseph's Arts and Science College, has also been volunteering most days. His students Rohit and Nelson also accompany him. “We don’t differentiate between Catholic, non-Catholic. We offer help to anybody who comes. We ensure the burial is conducted smoothly and a decent prayer is offered,” says Cherian. Since the Here I Am Team is under the Bangalore Archdiocese, there is also a priest stationed at the burial ground, in case somebody needs a final prayer. Before the ambulance carrying the body arrives, they are informed by the hospital. Some of the young volunteers even go to the hospital, and help prepare and pack the body if nobody is there and bring it in the ambulance. The Here I Am team has arranged for three old ambulances. The graves are already dug in different places. Since there have been many burials, the crematorium is crowded with little space between coffins. ‘If the body is not inside a PPE kit, then we don’t take a chance, we carry the casket as it is.” 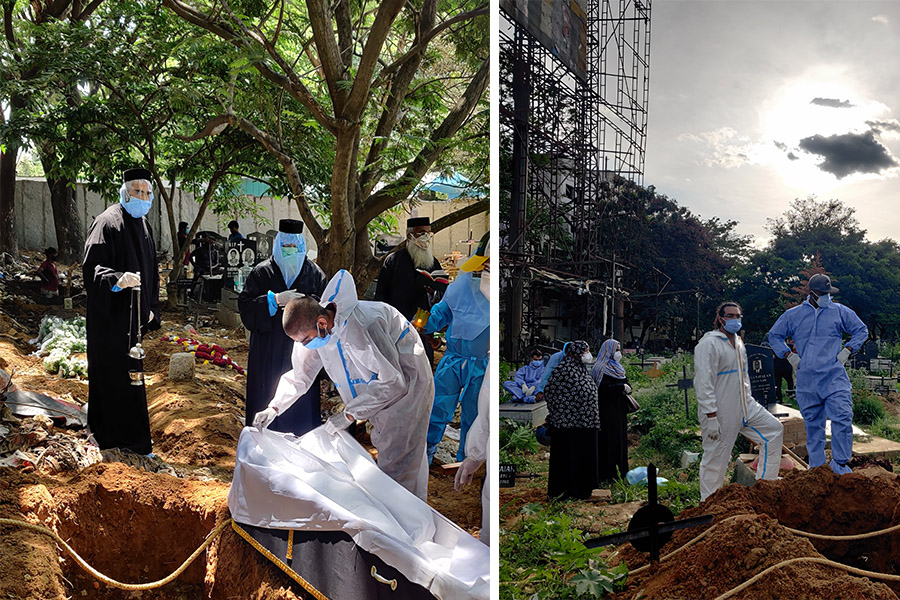 (From left) Johann, a young student volunteer, and the priest preparing the body for burial; Brandon and Adrian Boniface, a management student from Paris, offering assistance at the burial siteOn several occasions, the body is very heavy and the coffin’s added weight makes it heavier. The volunteers bring the coffin inside. “If the body is in a bag, we take it out and put it on a stretcher and carry it to the grave. Then we transfer the body to the coffin and wait for the prayers to be offered. If a relative wants to see the face, the volunteer has to be extra careful while opening the bag. We have a person who comes around with the disinfectant immediately after. Then, the body is lowered into the grave with ropes,” says Cherian. During the peak of Covid-19 cases in May, the team conducted 25 burials daily. “It can be exhausting. In the afternoon when I am there, I do between 8 and 10 burials,” says Cherian. The team is not confined to just one cemetery. “When we receive a call, sometimes we walk across to Gate No. 7. It’s almost a kilometre away,” says Cherian. There have been occasions when Cherian has assisted with burial of people he later discovered that he knew. “There used to be a milkman in our area. I knew his wife was not well and had died that day. Someone called us to Gate No 7 to help with the burial. After we finished, someone called out my name and gave me a big hug. I discovered then it was the milkman and that it was his wife we had helped bury. He was so touched that we were all there,” says Cherian. He also helped bury the wife of a friend who had been working at the chapel for 20 years. Cherian, who has been with Titan Company for 32 years, initially in the Hong Kong office and now with the design team, feels some of the elder volunteers have brought corporate professionalism into their volunteering work. “I was happy to find more people like Roy Thomas and Brise Paul from corporates like Amazon and Deutsche Bank [respectively],” he says. “It’s important elder people are there. Sometimes people try to bully the young volunteers, some claim it’s not a Covid death. When in doubt, we insist we carry the body in the coffin. We try and ensure that young volunteers are not endangered.” He explains, “One person wanted the casket to be carried open, and I said no. When an older person is there, you can reason things out.” While Cherian reaches the burial ground at 2 pm for the 2nd shift, the main coordinator Sagayaraj or the priest, Father Rajesh, are always present. There is an element of risk involved with burying the dead. So, in mid-May, the Archbishop's office helped by tying up with the local primary health care centre. Many young volunteers were given their first vaccine shot. Cherian has also taken his first jab. In addition, coordinator Sagayaraj ensures everybody is in their PPE kits. “Once we finish the burial, everybody is sanitised with a spray,” Cherian says. At the end of the day, the PPE kits and gloves are burnt in one corner of the ground. “Once we get home, we have a hot water bath,” he adds. Seeing the grief of the relatives and performing so many burials a day can get extremely depressing, so, the team finds simple joy in the tea breaks and lunch breaks they take in between their tasks. “Milton comes all the way from Ulsoor and gives us hot tea and snacks twice a day. The team is so exhausted and most often fully drenched in sweat that these breaks are a welcome change,” says Cherian. “All the love and camaraderie helps everyone get through so many sad burials,” Nicole adds. Those who would like to participate but are unable to come to the burial ground are doing their bit by sending water, juice and snacks. Many of Nicole’s friends have sent PPE kits. “People have very large hearts”, he adds. There have been many heart-warming moments. A week ago when Cherian lost his brother to Covid-19, the team of volunteers turned up at St Patrick’s Cemetery even when there was no need for assistance. “All the Here I Am volunteers, who have by now become my friends, arrived at the location. It was so touching to see that they found out the timing, and the location, which was far away. These are small things that I will never forget.” Kindness comes to Cherian naturally. For the last ten years, along with his sister and brother-in-law, he has been running the Jeevarathni Foundation where they take care of the upbringing of around 42 underprivileged children. Apart from helping them with school education, the children are being helped to develop skills with professional courses. Cherian has been involved with finding land, identifying the children who need help, and coordinating the running of the Foundation, apart from organising events to raise funds. Ask Cherian why, despite seeing two Covid-19 deaths in his family, he chooses to take up volunteering, and he says, “I was impressed by the selfless work Here I Am is doing for those needing help, and hence feel privileged to be able to help… we have all become like family.”