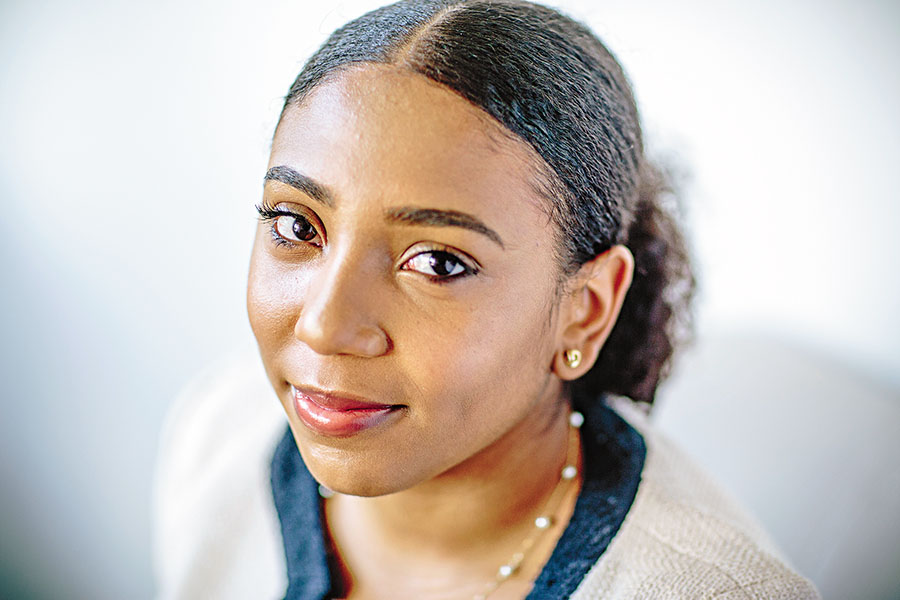 As a child living in her grandmother’s crowded Bronx apartment, Wendy De La Rosa says she would “put on my adult voice” to talk on the phone to bill collectors and the landlord. She got the job because she spoke the best English in the immigrant household
Image: Timothy Archibald for Forbes
Wendy De La Rosa, 29, co-founder of Common Cents Lab, recounts an experiment she ran a few years back with Digit, an app that tracks users’ spending and moves free cash from their checking account into savings. One group of users was sent a text message in February before they got their federal tax refund, asking if they wanted to save part of it. Another got a similar text right after the refund hit their checking account. Those responding to the early message saved an average of 27 percent, versus 17 percent for those who were texted later. When you consider the average refund is $2,900, that’s an impressive chunk of extra savings. “Every dollar that leaves our checking account, we feel that loss over and above the economic loss of that dollar. It physically hurts us to lose money,” De La Rosa explains. In other words, it’s easier to save money that you never saw in your checking account.

The 5-foot-1, ponytailed De La Rosa is a guru of one of the hottest trends in fintech: Startups are increasingly designing (or tweaking) savings, investing, insurance and employee-benefit products based on the insights of behavioural science. For example, Lemonade, which sells renters’ and homeowners’ insurance, attempts to discourage phony claims by ­donating excess profits (over its agreed-upon share) to charity. Chime, an ­online bank with 2.6 million accounts, allows members to automatically transfer 10 percent of every paycheque directly into their savings accounts. Why 10 percent? People “think in round numbers” when asked how much they want to save, says De La Rosa, a member of the 2018 Forbes 30 Under 30 list for finance.

In 2015, De La Rosa co-founded the Common Cents Lab, a non-profit applied-research shop that aims to help low-to-moderate-income households increase their financial well-being. Last year 93 companies and non-profits applied to have their services and customers used as guinea pigs in Lab experiments. Fourteen made the cut. So far, De La Rosa has worked with 20 fintech startups, including four on the Forbes 2019 Fintech 50 list: Plaid, Chime, Credit Karma and Even. “It’s a mutually beneficial relationship, where the researcher gets to research what would otherwise be impossible and we get to learn something [for free]. It’s like, why would we not?” says Even CEO Jon Schlossberg, who has raised $51 million for his startup.

Common Cents operates under the umbrella of the Center for Advanced Hindsight at Duke University, run by the well-known behavioural scientist Dan Ariely, a Lab co-founder and also the chief behavioural officer of Lemonade. But De La Rosa works out of Palo Alto, where she’s completing a Stanford PhD in consumer behaviour. It’s not just the lure of free research that has would-be partners competing for her attentions. De La Rosa says she’s seen a few startups fail because they focussed on slick technology and artificial intelligence while ignoring basic human psychology.

A self-described hustler, De La Rosa says her life has always been centred around money—or the lack thereof. At nine, she immigrated to the US from the Dominican Republic with her mother, settling into her grandmother’s small two-bedroom apartment in the Bronx along with ten other relatives. De La Rosa picked up English quickly (through school and the Cartoon Network) but had to retreat to the apartment’s one bathroom for needed quiet to finish her homework. And finish she did. She was valedictorian of her public elementary and middle schools and of Cardinal Spellman High School in the Bronx.

Meanwhile, De La Rosa’s mom, a psychologist in her home country, took what work she could find—as a hotel maid. “It was very hard to see your educated mom clean rooms. She sacrificed a lot because of me,” De La Rosa says. “I think that’s where I started to fall in love with financial decision-making, because when you are living in a certain circumstance where every dollar really matters, it becomes a topic of conversation.”

So De La Rosa headed off to Wharton, where she studied finance and management, graduating summa cum laude and Phi Beta Kappa in 2011. Her well-earned reward: A job at Goldman Sachs. Having grown up poor, she wanted to be able to help her family. “Working on Wall Street seemed like the easiest, fastest way to get there,’’ she says. Fast, yes, but not so satisfying for De La Rosa, who in 2014 went to work with Ari­ely on a new behavioural economics unit at Google. The next year, Ariely, De La Rosa and two other colleagues came up with the idea for the independent Common Cents Lab and snagged millions in annual support from the MetLife Foundation to make it happen.

Much of De La Rosa’s work involves what might seem like obvious observations about human behaviour. But there are lots of twists to applying those insights in a useful fashion. Chime’s 10 percent automatic savings deduction is taken from every paycheque. By contrast, banks’ traditional savings programmes transfer money on a set day each month—typically the 25th. Yet 70 percent of Americans get paid on a weekly or bi-weekly basis, and a single date-linked withdrawal can lead to bounced cheques and overdrafts, says De La Rosa. Not an inducement for saving.

Chime’s Bank Fee Finder is based on Common Cents’ research showing people dramatically underestimate how much they pay in bank fees. Users go to Chime’s website, link their current bank account and get a precise accounting of how much they paid during the past year. The average—around $300—is powerful marketing for no-fee Chime.

“ I see my family in every experiment that I run... I know what it means to be living paycheque to paycheque.”
Wendy De La Rosa, Co-founder, Common Cents Lab

One of De La Rosa’s key lessons for partners: Humans don’t like barriers and red tape, so make it easy for them to change their behaviour. In one recent experiment, a sample of Credit Karma members were sent an email that said they could raise their credit scores by reducing their credit card utilisation rate, suggesting they pay off a specific credit card and providing a click-through button to allow them to do so. While results aren’t yet public, De La Rosa says email recipients had a significant increase in credit scores compared with other members who must log in, call up their credit scores and then follow Credit Karma’s “credit coaching” advice.

In September, Common Cents got some competition. Acorns, a member of the Fintech 50, launched a “Money Lab” with Shlomo Benartzi, a professor of behavioural finance at UCLA. They invited academics to submit proposals for behavioural tests on the 4.5 million users of its microinvesting and savings apps. The results produced by this not-for-profit venture will be publicly available, even to Acorns’ competitors. (Acorns has also been working with Richard Thaler of the University of Chicago, who won a 2017 Nobel Prize for his pioneering work in behavioural economics.)

Ariely says there’s a good reason startups are leading the way in behavioural-driven innovation. At traditional banks, he argues, “the incentives are to get people to overspend and overborrow. That doesn’t create an incentive to innovate and make better decisions”. Not that the fintechs, who must justify the hundreds of millions Silicon Valley has poured into them, are all so pure. De La Rosa points out a problem with free fintech services. “If you have a free product, your only business model becomes advertising,” she says. “So you get into the world of trying to sell people things that they don’t necessarily need.”

Maybe not such a politic thing to say, given that Credit Karma, a free service that rakes in hundreds of millions in referral fees from credit cards, is one of her many research partners. No matter. For De La Rosa, this is personal: “I think I just see my family in every single experiment that I run. I lived through that. I know exactly what it means to be living paycheque to paycheque.”

Tweets by @forbesindia
India is now at the forefront: Absolut's Anna Malmhake
Hashtag battle: Inside the BJP and Congress social media war rooms