Women continue to be underrepresented, underpaid and, at times, discriminated against in the workforce. Yet there are more women in the C-suite than ever before 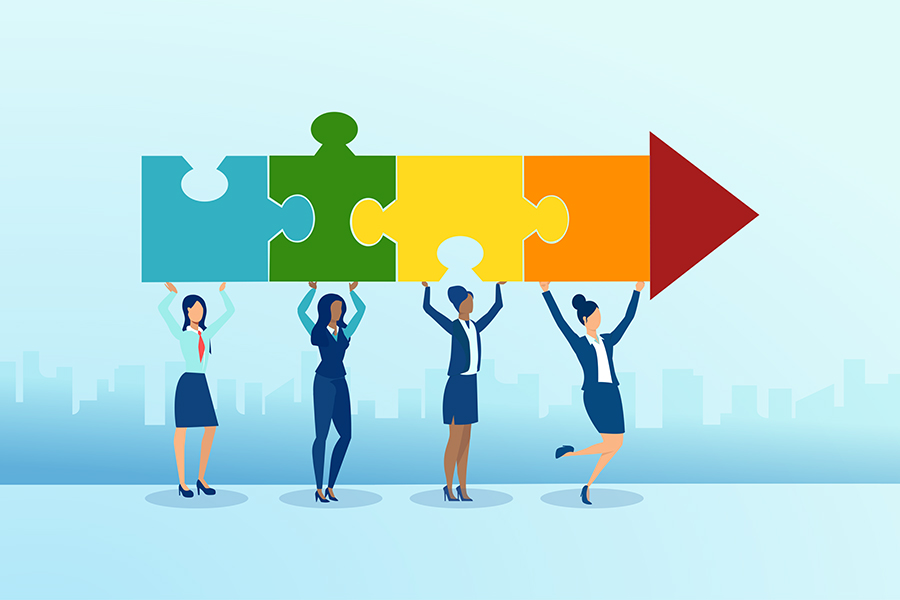 During the pandemic often highlighted trends seemingly in opposition: women’s leadership roles were growing, women in the workforce were declining
Image: Shutterstock

The state of women at work has been at the forefront of discussions about unexpected consequences of the COVID-19 pandemic. But data sets and stories during the pandemic often highlighted trends seemingly in opposition: women’s leadership roles were growing, women in the workforce were declining.

Over a year and a half into the pandemic, the seventh annual Women in the Workplace 2021 report, released in late September by McKinsey in partnership with Leanin.Org, gives a detailed analysis of women’s working status.

The report showed several overall trends: women workers are more burned out than prepandemic levels. Yet female workforce leaders are supporting diversity, equity and inclusion initiatives and pushing for more recognition and equality. Women continue to be underrepresented, underpaid and, at times, discriminated against in the workforce. Yet there are more women in the C-suite than ever before.

The ripple effects of pandemic-driven burnout have been felt keenly by women trying to juggle the demands of at-home work and family. According to a National Women’s Law Center analysis, since the onset of the pandemic, more than 2.3 million women have left the labor force, compared to nearly 1.8 million men who left in the same time frame. As of February 2021, women’s participation in the U.S. workforce was at 57 percent — the lowest it had been since 1988.

“If women are experiencing greater levels of responsibility for their families, their interest in remote and more flexible work is very high,” says Professor Vivian Riefberg. “The question for management going forward is going to be: What do I offer, how do I manage it, and what do I think about going forward?”

Women have made progress in terms of representation, particularly within leadership positions. The number of women CEOs rose by 2 percent to an all-time high in 2020 and about 8 percent of S&P 500 company CEOs are now women, according to the Women CEOs in America Report published by the Women Business Collaborative, C200 and Catalyst. Globally, 29 percent of all senior management roles are held by women, and 87 percent of global businesses have at least one woman in a senior management position.

For women hoping to advance their employment, several truths have emerged, according to several Darden faculty experts:

Sizing the pandemic’s impact on women in the global workforce

During her 31 years at McKinsey, where she retired as a senior partner, Riefberg saw how, in societies where women’s circumstances were more equal and more women joined the workforce, the GDP growth was greater. “If societies want to be fully successful economically, they need to engage women,” Riefberg says. “The world, including the private sector, would benefit by focusing on the large economic opportunity of improving parity between men and women.”

However, the pandemic seems to be pushing in the opposite direction. According to the McKinsey report, one in four women said they had considered downshifting their career or leaving the workforce before the pandemic. But since February 2020, that figure shifted to one in three women.

Internationally, according to Professor Gaurav Chiplunkar, that statistic is likely even higher in low-income countries.

“From an American perspective versus global, the challenges are very different,” Chiplunkar, a scholar and expert in the economies of low- and middle-income countries, says. “The pandemic was mostly a service-industry-related economic shock, which is where women are more likely to be employed. However, in these countries, women are more likely to work in informal, unregistered, small businesses, which are less adept at dealing with such large economic shocks and lie outside the public system where government support and aid can reach them.”

Juggling the needs of family and career continues to impact women more than men, in the U.S. and globally. According to a Forbes study released last year, 33 percent of working women don’t want to return to their physical workplace, due largely to the flexibility of working from home.

That question carries over to managerial and more senior positions as well. “The pandemic's impact on women and their careers is forcing us to evaluate what leadership needs to look like, especially around flexibility and how much people need to be in the office,” Lily West (MBA ’12), CEO of the UVA Alumni Association, says. “We are in the process of redefining leadership, and I'm hopeful that a broader definition will benefit women over time.”

The McKinsey report reveals, since 2016, women have been promoted to managerial titles at far lower rates than men, making it much more difficult to advance. “There are a million reasons [for this],” Riefberg says. “Some have to do with timing. We all tend to pick, promote and support people who are like us.”

Without that first step up to manager, it’s exponentially more difficult for women to continue advancing.

When Professor Carolyn Miles moved from COO to CEO of Save the Children in 2011, she became the first female CEO for the U.S. member of the global nonprofit, which works in 110 countries worldwide. The senior management team in the U.S. was about 40 percent women at the time, Miles says, a much more diverse landscape than most peer corporations. The organization’s board had a lower but growing percentage of women and diverse leaders.

Those numbers continued to improve in her decade at the helm, in large part because of conscientious leadership. To apply her lessons learned for bringing more diversity to today’s corporate leadership landscape, Miles says companies and organizations need to:


“There’s not a lot of magic to it. It’s intentionality and thinking it through,” Miles says. “You also have to continually talk to people inside the organization in lots of different forums: give people ways to talk about the different issues they want to discuss.”

“It comes from both directions,” West added, when discussing how to improve the diversity landscape at the leadership level. “Those doing the hiring and recruiting, and those who are raising their hand to be a part of the process and assume leadership roles.”

What are next steps for a women in leadership breakthrough?

Mentorship, allies and sponsorship are critical to advance women in leadership, Riefberg says.

“It’s one thing to say, ‘I want to help.’ It’s another to actually take overt actions to help people,” Riefberg says. “I am hopeful that Darden alumni will not only help Darden students, but will think about this in their own work environment. Where can they take overt actions?”

In looking for solutions abroad, Chiplunkar says, “It’s unambiguously true that good policy would lift everything up. The challenge, however, is in designing such policies with limited visibility at the ‘last mile’ on its targeting, delivery, effectiveness and impact.” Policy decisions that are driven by data and rigorous evidence, Chiplunkar says, will be helpful, along with a continued effort to bridge the gap between academia and policy making, and leaning into global connections to foster constructive conversations and ideas across increasingly inter-dependent economies.

It also starts with education, particularly management education for women.

“If you want to literally change the face of business and the C-suite, you need to get more diverse talent at highly ranked business schools, help the talent move through the schools, and then into those organizations,” Miles says.

Ultimately, women need to leverage their own unique experiences as a strength, not a weakness. “One of the biggest things I've learned as a woman in a leadership position is that I don't have to change who I am to be an effective leader,” West says. “My experiences as a woman and as a mother make me a better leader. Rather than shying away from that, it’s important to lean into it, talk about it, own it, and be self-aware enough to use those experiences to continuously evolve in your leadership capacity.”