KC Das, the inventors of rosogolla, has already earned itself the pedigree. Now, the fifth-generation scions are looking to steam ahead with expansion 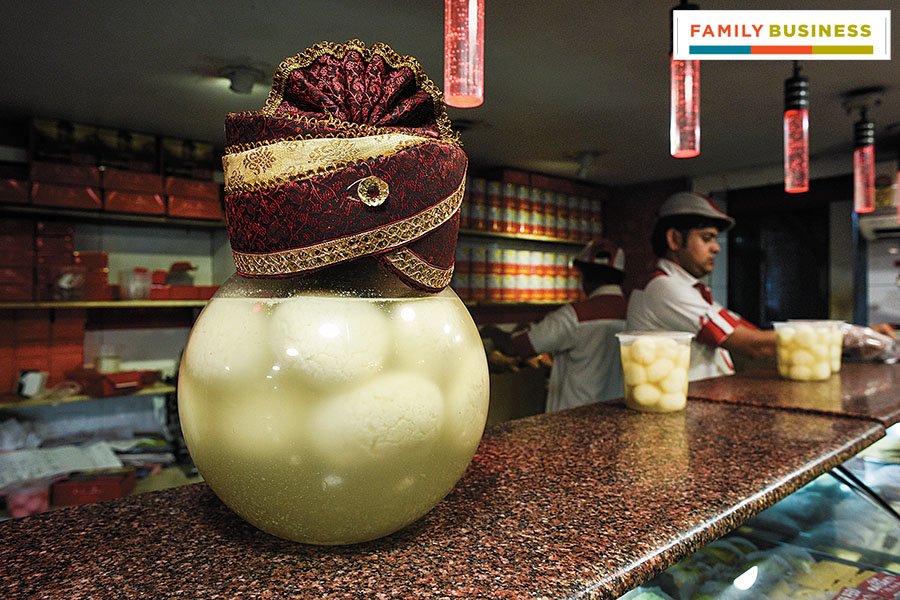 Maharaja bhog, a variety of rosogolla,  on display at the KC Das outlet in Esplanade, Kolkata
Image: Debarshi Sarkar for Forbes India

Legend has it that Nobel laureate Rabindranath Tagore was once gifted a pot of rosogollas by one of his acquaintances. Having nibbled at it, Tagore had asked if it was from Nobin Chandra Das’s shop in Bagbazar, a neighbourhood in north Kolkata. Upon being told it wasn’t, he is known to have said, “If you must feed me rosogollas, make sure it’s from Nobin’s.”

Perhaps it’s only fair that what the discerning tastes of Bengal’s most celebrated litterateur certified over a century ago has come to represent to the rest of the country the state’s abiding sweet tooth. Nobin’s experiment of rolling balls of chhana (curdled milk) and boiling them in sugar syrup, arguably the first one to do so, is now peddled by the fifth-generation scions of the family under the brand name KC Das. That, and a variety of other sweets and snacks, have fetched the company an annual turnover of about ₹25 crore in the last fiscal. It makes KC Das one of the market leaders in the Bengali sweetmeats industry that is highly fragmented and unorganised, and typically functions from stand-alone, local units. The company now has 25 outlets, seven of which are in Kolkata and the rest in Bengaluru. Their only outlet in Chennai had to shut shop in 2017 after costs skyrocketed due to GST.

“Our target is to double revenue in two to three years and expand, be it on our own or through franchises,” says Dhiman Das, director of KC Das. “But we are hamstrung by the limited shelf life of Bengali sweets [since they are produced by curdling milk, a procedure that was considered sin elsewhere due to the sanctity attributed to the cow]. Wherever we set up shop, we need to have a factory nearby [for sweets other than rosogolla]. That would require at least ₹15 crore turnover from the city.”

Did Nobin Chandra Das actually invent the rosogolla? By its very nature, food history is based on surmise, speculation and oral transfer of knowledge over generations. Likewise, claims of the first rosogolla run deep, into multiple sweetmaker households in Bengal, and wide, to Odisha. Chitrita Banerji, author and food historian, can’t pinpoint who made the first rosogolla. But that Nobin, a posthumous child who grew up in poverty, is among the earliest ones to depart from the tradition of sandesh (dry sweets) and boil balls of chhana in syrup stands undisputed. Says Banerji, “Nobin has been accepted for a long time as the creator of rosogolla and KC Das has a continuing family tradition. Given the absence of real data, he will always be credited as the creator of rosogolla and it wouldn’t be grossly inaccurate.” 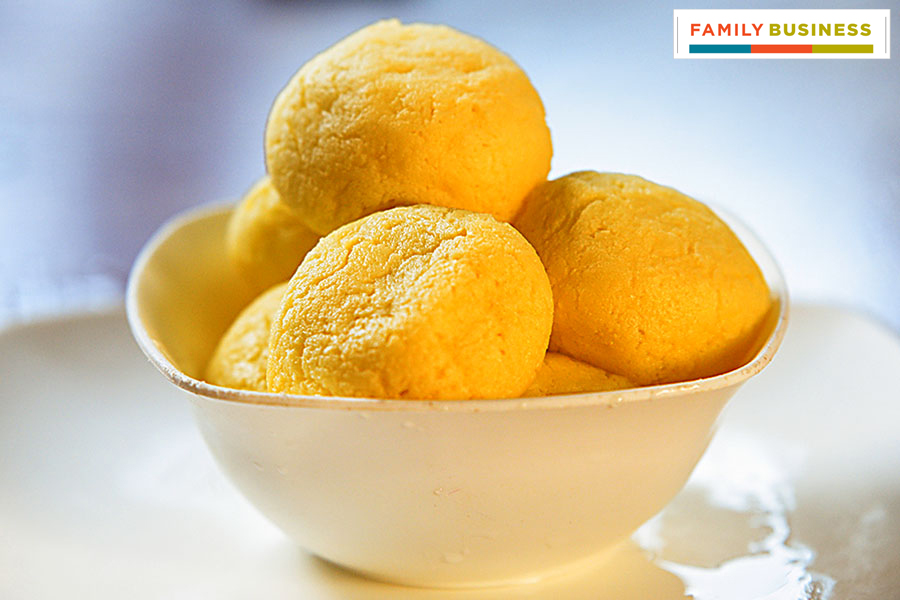 A variety of rosogolla from KC Das
Image: Debarshi Sarkar for Forbes India

In November 2017, the West Bengal government cited the sweetmaker’s discovery to claim the Geographical Indications tag from Odisha, the neighbouring state embroiled in a conflict with West Bengal for long over the origin of the sweet. Nobin’s story has been turned into a Bengali feature film, Rosogolla, directed by filmmaker Pavel, which released last December. The postal department launched a stamp in the same month to commemorate the 150th anniversary of rosogolla’s invention.

Born in 1845, Nobin was always prone to experimentation. A failed attempt saw him being kicked out of work with a local confectioner. He set up his own shop to attempt the rosogolla, but was soon mired in debt as the sweet would keep crumbling. In 1868, he figured that the trick lay in the right consistency of sugar syrup—not too thick—to hold it together. But commerce was the last thing on his mind and he would distribute the rosogolla at local addas. Till a Marwari timber merchant who was driving by stopped at his shop for his son to have water, and the father and son were given the sweet to taste. They loved it and, almost fortuitously, rosogolla was extricated out of a neighbourhood and introduced to the community at large. “It may sound ironical but the popularisation and commercialisation of the rosogolla came through a non-Bengali,” says Dhiman.

How did the rosogolla come to symbolise the community and not, say, the sandesh that most Bengalis love with equal fervour? Perhaps because it is so unlike any other Indian sweet, which is either dry or isn’t made of chhana. “And of course its simplicity is part of its appeal. There is nothing in a rosogolla but chhana, sugar and water. How much more minimalistic can you get? Yet, the technique is crucial,” says Banerji.

Nobin passed away in 1925 after which his business was taken over by his son Krishna Chandra (KC Das, after whom the company is named), and his younger grandson Sarada Charan. The two were driven by scientific curiosity—KC was an innovator at heart and Sarada a research assistant to CV Raman, who was awarded the Nobel Prize for physics, at the Rajabazar Science College—and the urge to increase the shelf life of sweets resulted in vacuum-packing rosogollas in a tin, which would prolong their longevity, minus preservatives. In 1930, they set up the first outlet of KC Das and started selling canned rosogollas, the first in India to do so. The product, and with it the brand, was ready to be transported across the country and abroad. 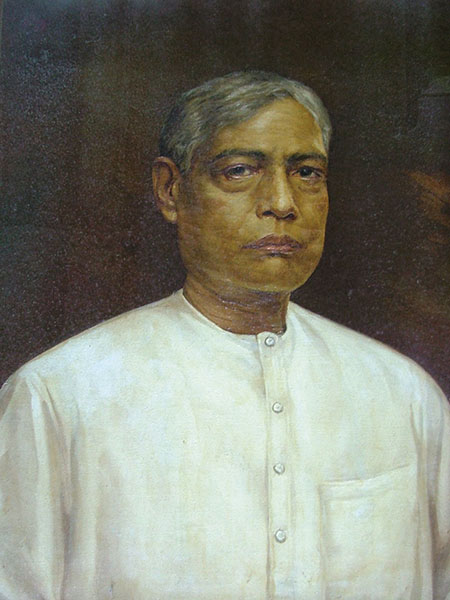 The man after whom the company is named
“KC Das also did make a contribution of his own. He took his father’s creation, the rosogolla, and created the rosomalai, which is the same ball of chhana floating in a sweet, milk syrup (sometimes garnished with crushed pistachios, sometimes flavoured with saffron). That, too, is sold abroad. But now other confectioners, such as Haldiram’s, also export it,” says Banerji.

In 1935, a year after KC Das’s death, Sarada set up the company’s first modern outlet in Esplanade, a posh neighbourhood, complete with liveried waiters. Over the next decades, he expanded in the city. But, in 1965, the business faced a blow when then Chief Minister Prafulla Chandra Sen imposed the West Bengal Channa Sweets Control Order banning milk sweets in Kolkata and its neighbouring areas, citing scarcity of milk supply. Milk should first go to the children and the mothers, he ordered. “All outlets, barring the Esplanade one, were shut, and the family struggled to make ends meet,” says Dhiman.

Two years later, the law was reversed, but scarred Sarada Charan enough for him to seek alternatives. Bengaluru, which he would visit en route to the Central Food Technological Research Institute in Mysuru, and which appealed to him for its weather and the quality of milk, ticked the right boxes. In 1972, he opened the first outlet on St Marks Road (which they still own; rest are franchises) and deputed younger son Birendra Nath Das. Bengaluru also houses the company’s R&D unit, opened in the early 1980s, where KC Das has been experimenting with, among other things, probiotics much before it became a fad.

Now, the family wants to grow at a frenetic pace. To other metros, like Mumbai and Chennai, and also to tier 2 cities like Patna and Jaipur. “We are also looking to relocate our current Kolkata factory in Bagbazar to a bigger facility that will augment production capacity,” says Barid Baran Kar, the CEO who reports to the board of directors that comprises family members and is responsible for decision-making.

They also have to contend with sweetmeat chains in Kolkata, where younger generations have moved in and plan to expand aggressively. But Dhiman insists they are not competing with them. “The new breed of sweetmakers has introduced foreign ingredients like chocolate. We’d rather innovate within the boundaries of our tradition, like coating gulab jamun with sandesh etc,” he says.

Kar adds that health-conscious millennials haven’t been able to slow down the business that has grown 15-20 percent over five years. Whether they will continue to drive sales remains to be seen. But as far as history goes, KC Das has already etched a chapter for itself.