As more people dip their toes further into the virtual world and need correspondingly more options for self-expression, and more brands and designers step up to provide them, the more liberating and potentially messy the choices become, the more what you put on your avatar is going to matter 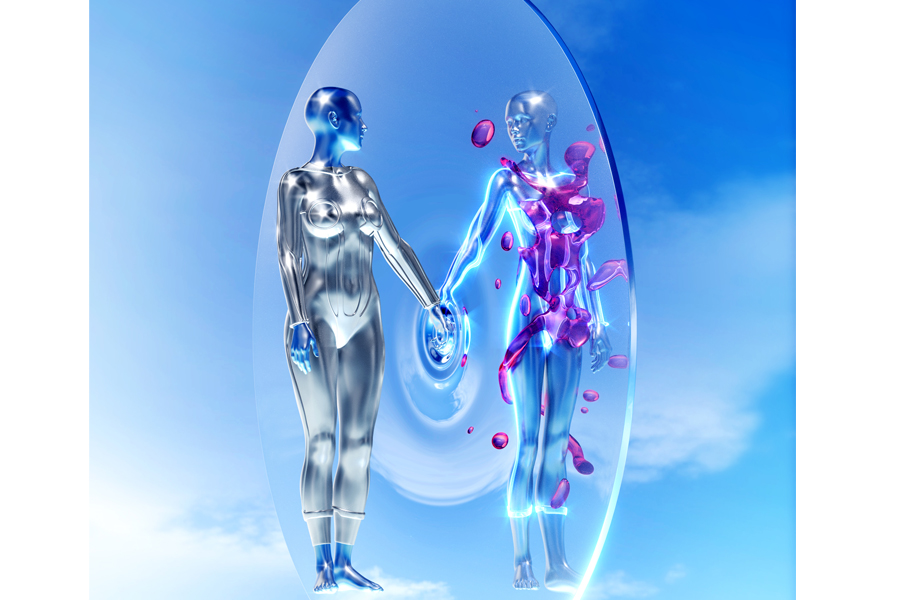 Dressing for a virtual world is going to be both enormously liberating and potentially very, very messy. (Sucuk und Bratwurst/The New York Times)

Late in October, when Mark Zuckerberg unveiled the rebranding of Facebook as Meta, he did so in an immersive video designed to reveal his vision of the future in which virtual he, Mark Z., gave a virtual tour of all of the exciting things we will able to do in the new virtual world otherwise known as the metaverse.

There was experiential art. There was a meeting where attendees floated around a table as if in a spaceship. Yet there was our host himself, as a cartoon representation, in black jeans, white sneaks and a long-sleeve navy T-shirt, looking very familiar, only a little more fit.

“Really, Zuck, you could have worn ANYTHING, and you chose this?” tweeted one observer. It was a fair point.

If the upside of the coming future is, as Zuckerberg said in his presentation, to “be able to do almost anything you can imagine,” and “express ourselves in new, joyful, completely immersive ways,” shouldn’t you wear some totally awesome, not-in-your-real-closet clothes? He did have a skeleton onesie and an astronaut suit visible in his virtual closet. Andrew Bosworth, Meta’s chief technology officer, had attended the virtual meeting in the guise of a giant friendly robot.

That is the promise of a virtual world: that you get to be anybody you want, unhampered by flesh, gravity, environment, expectations and economics, or maybe just the record you have created, and you get to play with the transformative power of fashion raised to the nth degree.

You can be braver, more gorgeous, more aggressive, more green. You may change gender, age, race, profession (even species); look richer, thinner, more athletic; and access the inaccessible, be it a designer gown, the coolest hoodie or a dress that blooms and grows around you like a vine.

“You can be anyone you want to be, free from proscriptive constructs and sensory needs,” said Lucie Greene, the founder of Light Years, a futures and brand strategy firm.

So what was Zuckerberg doing playing it safe in his usual just-the-basics clothes?

He was reflecting the truth that how we express identity in virtual worlds is actually a fraught and complicated question disguised as an amusing game of diversion. And that, if his big bet is correct and the metaverse and the physical world become increasingly interconnected, it is a question that is only going to get more complicated.

It is going to become as essential and telling a matter as how we dress in the morning.

“In the real world we use clothing in all kinds of complicated ways: to experiment and try on different selves,” said David Chalmers, a professor of philosophy at NYU and the author of “Reality+,” a book that argues for embracing digital worlds. “You’ve got your psychological identity — how you feel inside — and your social identity: how you express that. In the VR world, that’s just more complex.”

After all, there are so many fewer limitations than in the physical world, and so many more variables to consider. But it would be a mistake not to consider them. As more people dip their toes further into the virtual world and need correspondingly more options for self-expression, and more brands and designers step up to provide them, the more liberating and potentially messy the choices become, the more what you put on your avatar is going to matter.

The business of fashioning the future

There’s already an entire fashion-technology industrial complex springing up to cater to whatever dressing needs avatars will have now and in the future.

There are digital-only fashion brands — more than 100, for example, on DressX alone, a virtual fashion boutique opened in 2019 by Daria Shapovalova and Natalia Modenova. Digital styling games like Drest, owned by Farfetch, the digital marketplace-turned-conglomerate, which offers the ability to play with hundreds of digital outfits, many also available IRL. There is also a growing number of ready-to-wear brands testing virtual versions of their collections on various virtual platforms and creating metaverse business units employing fashion school graduates trained in virtual design.

Gucci created a virtual Gucci garden for Roblox, and Ralph Lauren a virtual RL ski store. The British Fashion Council hosted “The Fashion Awards Experience” on the platform, complete with an award for metaverse design. Balmain worked with the gaming platform Altava to offer its own limited collection. Balenciaga created special skins for Fortnite (so did Louis Vuitton) after making its own game, “Afterworld: The Age of Tomorrow,” featuring its ready-to-wear collection, and has announced its own metaverse division. So has Gucci and so has OTB, the parent company of Maison Margiela and Diesel, christening it “Brave Virtual Xperience.”

In December, Nike bought RTFKT, the virtual sneaker company. Practically every week seems to bring the announcement of another brand making NFTs, including Givenchy, JW Anderson and Adidas. In March, a metaverse fashion week will take place courtesy of Decentraland and UNXD (the digital marketplace that hosted Dolce & Gabbana’s $6 million NFT couture auction).

You can buy a strappy asymmetrical blush pink top and quilted pants with detachable green organza sleeves that look like a cross between orbital rings and lily pads from the digital brand Placebo’s Meta-Genesis collection; a light-up “halo hat” by Clara Deguin; or an “immortality dress” by Alejandro Delgado, a mini that looks as if it were made from fuchsia synapses. The digital fashion house Auroboros offers a physics-defying creation that grows around you, making your body resemble a living landscape, and the Fabricant has flaming shoes. You can opt for streetwear or high priestess-wear or knightly armor.

How to decide what to wear

But the social strictures that often govern fashion choices in real life do not yet really hold sway in virtual life. After Zuckerberg’s presentation, Meta may have tweeted, “Hey Balenciaga: What’s the dress code in the metaverse?” but the truth is, there pretty much are no dress codes. Yet.

It’s the opposite of high school: You aren’t stuck with one kind of style because you can simply create another avatar in another place, put on another skin and change your aesthetic entirely. You can be both a Gucci person and a Ralph Lauren person. And a fire-breathing dragon with lots and lots of scales. A hypebeast can try on the persona of a fairy princess or prepster. That’s potentially awesome but also a recipe for option anxiety.

That’s especially so as we start to spend more and more time online, in which case juggling a multiplicity of selves and styles may start to feel less liberating than confusing and the line between freedom of self-expression and disguise hard to parse. What seems like dress-up now may have repercussions later. Besides, if blockchain is involved, it could follow you forever.

The problem is there’s something playtime about transforming yourself into a cartoon, as most avatars now seem. You’re stepping off the elemental plane and into the screen, like characters in “Space Jam” and “Who Framed Roger Rabbit?” We’re conditioned to associate that world with Hollywood and fantasy, which makes it easy to think of the choices we make inside as inconsequential.

“Everything is experimental right now,” said Ian Rogers, the chief experience officer of Ledger, the virtual wallet, and the former chief digital officer of LVMH. “We’re in the gold rush period where anything goes, but it’s evolving very quickly. It’s a brave new world we have not lived in.”

Think before you dress

We’ve almost all experienced the smoothing out or altering of reality (with the sort of virtual plastic surgery enabled with Photoshop and Facetune apps) on platforms like Instagram and Snapchat, with their various filters and “curations,” their personalities and even virtual influencers like Ruby 9100M and Lil Miquela who have been made to measure. It’s no coincidence that they also happen to be the platforms for which the first virtual fashion was invented.

Right now, the metaverse is both a place where you can be recognizably you, as you are (sort of) in real life, and a place where you can be transformed into the you of your dreams. It is the ultimate opportunity for dress-up and a potential minefield of unwitting self-revelation. Just because a virtual space is free from certain real life limitations does not mean it is free from the preconceptions everyone brings to parsing character.

In fact, absent other clues, like profession, a virtual space makes clothes even more important. In the metaverse, “what you wear becomes your visual identity,” Greene said. The shredded jeans and crop top or iridescent sci-fi priest’s robes or branded hoodie may be all the users your avatar interacts with know about you and the first signals of shared tastes.

This can lead, as Rogers pointed out, to “tribalism,” just as they do in the real world.

If the two worlds become more contiguous — if, as Chalmers said, they become worlds we “cohabit” — “I would think the way we use clothing to express identity will be more comparable to the clothes we wear in real life,” he said.

But Paula Sello, a co-founder of Auroboros, hopes the trend is in the other direction and the creativity of dressing for the metaverse trickles down and fosters more creative dressing in the physical world.

All of which means what? Go boldly where Mark Zuckerberg didn’t go before. But don’t fool yourself into believing it doesn’t matter. Clothing, as Amber Jae Slooten, a co-founder of the Fabricant, said, “affects how you feel about yourself.” Even in the virtual world. And that, Rogers said, may have “implications we haven’t even begun to grasp yet.”

“How do you separate your corporeal self from your pseudonymous self?” he asked. “Can you?”

Tweets by @forbesindia
'It's all just wild': Tech startups reach a new peak of froth
Photo Of The Day: Young maverick