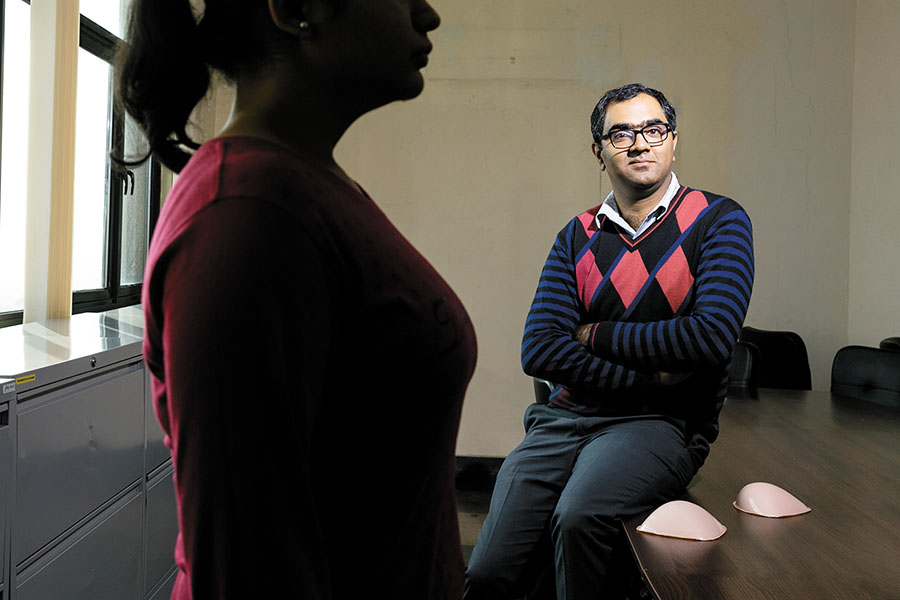 It was in the cancer OPD of a hospital that Pawan Mehrotra, a biochemist researching breast cancer, realised the embarrassment, taboo and emotional distress that women face after undergoing mastectomy. He observed that there were women who had draped sarees on the right and left sides to hide the fact that they had lost a breast.According to February 2018 data from the Union Health Ministry, breast cancer is the most common kind of cancer among women in the country, with almost 26 women out of 1 lakh being diagnosed with it.

The social and psychological issues surrounding women undergoing mastectomy prompted Mehrotra, 35, in 2014, to start looking for a low-cost and robust solution. “I approached NGOs as well as hospitals, and came across women who had lost one or both breasts. Some had used imported prostheses and were still complaining about the fit; others were simply using substitutes like cotton or foam balls,” he says. To further his research, he got permission to learn basic manufacturing techniques at the IIT Delhi along with undergraduate students.

In 2017, with seed capital of ₹50 lakh from Social Alpha—the latter also helped Mehrotra and his team get government support and access to hospitals—he set up Aarna Biomedical Products in New Delhi. In 2018, he launched a small kit, which includes one waterproof prosthetic breast of the patient’s size, two covers and a holder for the prostheses, and two mastectomy brassieres. “The idea was to provide a holistic solution that was lacking in most other available products. Poorti gives women everything they require in one pack, after a physical pre-trial to determine the size and fit,” says Mehrotra. Poorti kits starts from ₹4,000, with an increase of ₹250 for larger sizes.

Mehrotra says there are no manufacturers of ‘light-weight silicone’ breast prostheses in India; dealers either import the cheaper varieties usually from non-medical grade or adulterated silicone that is not suitable for cancer survivors—or the European-made varieties that do not have a maximum retail price and hence can prove to be expensive.

Pre-trials are conducted by hospitals, NGOs and other Poorti users with the help of Sampoorti, a kit that includes prosthetic breasts of different sizes, pocketed brassiere nets, covers and other accessories. After the pre-trial, the Poorti kit is delivered to the patient’s doorstep. Currently the kits are available in Punjab, Delhi, Uttarakhand, Gujarat, and Tamil Nadu, and the company has established tie-ups with hospitals in Kolkata, Pune, Agra and Lucknow.

Marketing the product remains one of the biggest challenges for a sensitive issue such as mastectomies, and so far word-of-mouth has worked best for Poorti. Till date 1,202 kits have been sold, generating a turnover of ₹47 lakh, and making the company profitable.

Mehrotra’s work means he comes across numerous heart-warming stories every day. “A woman, after her mastectomy, had stopped hugging her daughter because she did not want her to realise that she had lost her breast. It was only after using Poorti that she now hugs her daughter with confidence.”