As the markets rediscover retail, Radhakishan Damani and Kishore Biyani reap the benefits 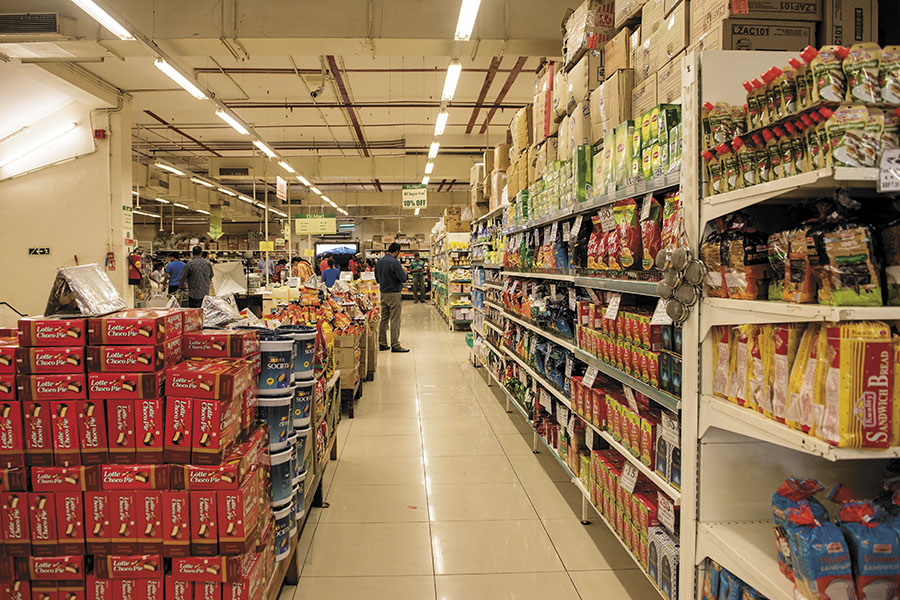 The Radhakishan Damani-owned DMart has a valuation of ₹69,000 crore as of mid-October
Image: Mexy Xavier

After a sustained lull, the retail sector has finally rediscovered a spring in its step. Investors are, once again, showing faith in what was considered a sunrise sector in the early 2000s, but had failed to sustain momentum. This time, having learnt from its past mistakes, the industry is perceived to be on a much firmer footing. And in for the longer haul.

First, consolidation: Rivals (Future Group and Bharti Retail) have merged or been bought out (Nilgiris by Future Group). Some like the RP-Sanjiv Goenka Group’s Spencer’s and the Aditya Birla Group’s More have scaled back expansion plans and shut down stores.

Second, per store profitability is now the name of the game. Scale at the cost of profitability is no longer an option. Retailers will now tell you that there is enough space for everyone and the first to expand is not necessarily the winner.

And lastly, retailers have gotten better at the science of retailing. Distribution centres and enterprise resource planning systems are de rigueur. As a result, their operations are far more efficient, leading to better bottomlines.

A significant trigger for the recent upswing in retail can be attributed to the March 2017 listing of Avenue Supermarts which operates the DMart brand of stores. Its efficient operations coupled with a low free float have given the Radhakishan Damani-owned retail operation a stratospheric valuation of ₹69,000 crore as of mid-October.

At the same time, the valuation of rival Future Retail has also grown as it reorganised businesses and showed healthy same-store sales growth. Still, analysts caution that valuations are running ahead of fundamentals. “While the valuations of the retail sector may have received a short-term bump with DMart’s listing, in the long term, it is the fundamentals of the business that will drive stock prices,” says Viraj Mehta, head and fund manager, Equirus Portfolio Management Services (PMS).

For the gains to continue, the challenges will have to be contended with. The threat from ecommerce looms. While it is still a nascent problem—with companies like BigBasket and Amazon losing money—there is every chance it could skew the business model of the sector and result in a nasty price and market share war.

Having learnt from its past mistakes, the retail industry is on a much firmer footing

Then there is always the persistent issue of the maximum retail price regime which makes it difficult for brick-and-mortar retailers to operate in areas like South Mumbai where they must pay high rents but can’t charge beyond the statutorily mandated prices.

But for now, retail’s resurgence has had a clear impact on the 2017 Forbes India Rich List which saw two titans make a comeback—DMart’s Radhakishan Damani, 62, who last appeared in 2015, and Kishore Biyani, 56, who is back on the list after a five-year hiatus.

Radhakishan Damani
Rank 12 | $9.3 billion
It was in 1995 that Radhakishan Damani, a successful investor at the point, decided to try his hand at retail. Unlike other retailers, he was clear that he would stick to value retailing—he knew he had to make money. Damani took over two franchisees of Apna Bazar and made sure he was at the small 7,000 square feet store in Nerul every day, interacting with customers and understanding what they were looking for. But as Damani went about his business, he realised that to be a successful entrepreneur he needed more freedom—something he didn’t have as a franchisee. About half of his assortment was dictated by Apna Bazar.

As a result, by the time he set up the first DMart store in Powai in 2002, Damani’s initial thoughts on retail had already been formed. He developed a model and for the most part stuck to it. Neville Noronha, chief executive and managing director at DMart, recalls the struggle to get him to stock apparel. Damani’s concern was that it was slow moving and out-of-fashion inventory would pile up. “He was okay with earning less but the overriding thought was that the inventory had to be fresh and clean. Like most of our difference of opinions, we always took time and adjusted to each other’s expectations, and he allowed us to persist and implement our thoughts and ideas within the realm of his expectations. Apparel as a reasonably sized and focussed business started more than five years after DMart started,” says Noronha, who has worked closely with Damani for over a decade now. 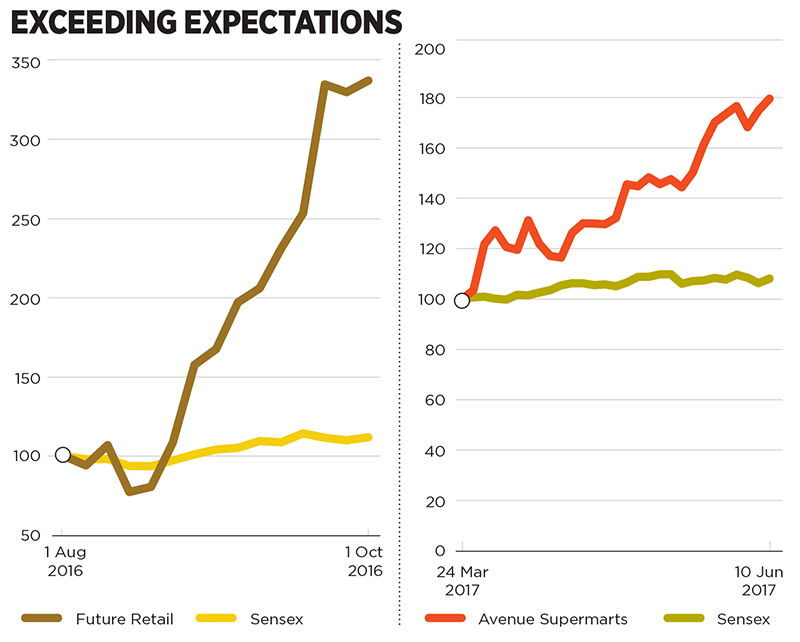 DMart paid suppliers well ahead of the competition in exchange for cash discounts. Instead of renting, it decided to buy the stores, which allowed it to keep costs in check and get into a promising location early. And for the most part, Damani eschewed malls. The stores were designed to optimise space (racks went all the way to the ceiling) and air conditioning was at a higher temperature than competitors. In short, every unit of cost was carefully scrutinised. The accent was on getting goods out fast and the per square throughput of DMart stands at ₹28,000 per square feet, significantly higher than rivals.

Unlike the norm in the sector, DMart initially expanded slowly and focussed on getting the model right. In its first decade to 2012, it set up 55 stores and has since expanded to 151 stores.

At the same time, Damani nurtured a young team of professionals led by Noronha, a former modern trade manager at Hindustan Unilever. After nearly a decade-and-a-half in the business, Damani stepped back and now largely plays the role of a mentor. “Assortment, mentoring young managers and visiting suppliers are all very dear to him and this is where he still spends his time,” says Noronha. He also instituted a company-wide employee stock options plan that has resulted in 90 percent of staffers owning shares. At present he doesn’t have any formal title in the organisation or the board. [Daughter Manjri Chandak is on the Avenue Supermarts board and represents the family’s interests, while Ramesh Damani (no relation) is chairman.]

What he envisioned, however, continues to work. The company has grown sales at 39 percent a year in the last five years. In the same period, profits rose by 52 percent a year. And this year, Damani’s model has been validated by the strongest external source—the stock market.

“DMart’s success is his dream come true. We professionals brought in the systems and processes to scale up the business and its consequent incremental value add. But this was and is his baby, his vision and his ideas and, most importantly, his active contribution on the buying and merchandising side. Today the happiest person in the team is him, for what has been built, not just for himself but also for so many others,” says Noronha. 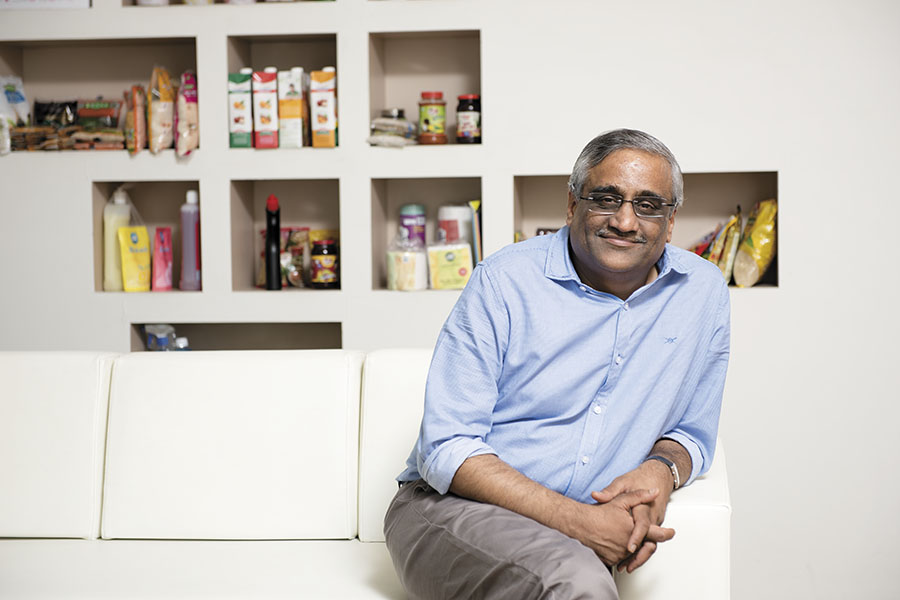 Kishore Biyani
Rank 55 | $2.75 billion
Starting around the turn of the century with one Pantaloons store in Kolkata, Kishore Biyani had had a stellar decade. Big Bazaar, with its ‘Sabse Saste Din’ concept, captured the imagination of India’s newly consuming class. It was not uncommon to see lines stretching outside stores during the January 26 and August 15 sales.

Biyani had always said that Indians tend to save and retail “needs to drive consumption through constant promotions”. He pioneered the Wednesday Bazaar, where midweek discounts lured shoppers as well as loyalty-based discounts through which frequent shoppers got deals that were not available to others.

Biyani’s businesses received their first big shock when demand dried up post the Lehman crisis in 2008. The Future Group, which had been built on a large dose of debt, struggled (but it never missed a single interest payment). “Every day, you see your stock price rising and you think you are so smart,” Biyani had said in a 2010 interview to Forbes India.

It called for a healthy magnitude of debt reduction, which he started doing in 2013 when the market battered his stock. His biggest deal, and some say hardest too, was the sale of Pantaloons, a business he had nurtured, to Aditya Birla Retail. In the interim, there was also a threat from online retail. Biyani bemoaned the fact that private equity funding meant that online players were providing unsustainable discounts and had cautioned that this couldn’t go on. He was right. Around 2016, the discounting levels reduced as Snapdeal and Flipkart found it hard to raise money at their erstwhile lofty valuations.

For his part, Biyani has used the last five years to deleverage and consolidate his businesses under four listed entities. Future Retail, valued at ₹25,000 crore, includes the Big Bazaar hypermarket chain as well as convenience stores like Easyday. Other smaller parts of his empire include Future Consumer, which supplies private labels for everything from soaps to toilet cleaners to juices and tea. Future Lifestyle Fashions houses Central and Brand Factory apparel stores, while Future Market Networks is a real estate holding company. His next task will be to consistently improve the operational performance of each of his companies, something that he has pledged to do. “For now, there is a lot of hope in the price today for Future Retail,” says Mehta of PMS.

Unless something dramatically changes, both Damani and Biyani are likely to be regulars on the Rich List, as growth and improving businesses metrics continue to propel their rise.