Even after a major hit due to Covid-19 last year, Polycab India maintained market leadership in its wires and cables business, and has now embarked on a multiyear transformational journey with an aim to cross Rs 200 billion in sales by FY26 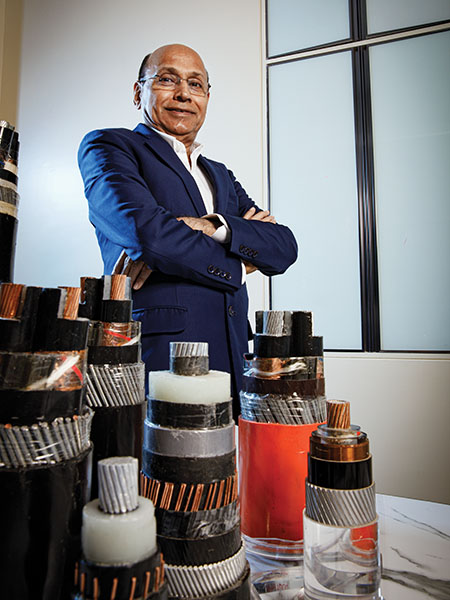 Inder Jaisinghani, chairman and managing director of Polycab India
Image: Mexy Xavier
Sixty-eight-year-old Inder Jaisinghani who started his journey from a little shop in Mumbai’s Lohar Chawl, recently made his debut on the India Rich List 2021, positioned at Rank 57 with a net worth of Rs 3.6 billion. Back in 1968, then fifteen-year-old Jaisinghani had to drop out of school to join his elder brother Girdhari, to take over the family business after the unfortunate demise of their father Thakurdas Jaisinghani.

“We started off modestly from a garage type arrangement in Sewri, measuring about 1,000 sq. ft. This is when my younger brothers Ramesh and Ajay joined us. Since we were a small team, we would have to wear multiple hats,” says Inder, chairman and managing director of Polycab India.

The Jaisinghani brothers worked relentlessly for hours—while Inder would manage sales and marketing, his brothers would handle production. They worked round the clock to meet deadlines. One encouraging aspect was their exponential growth year after year, resulting in a chain of factory setups. Inder then realised they need a five-year growth plan, and he started chalking out a roadmap for the company by setting targets to achieve over the next five years.

Cut to 2020. Just like every other businesses, Polycab also encountered challenges due to the Covid-19 pandemic. The topline took a hit during the June quarter as there was no business in April. The company said while the consumer durable business, which contributes nearly 10 percent to the topline, performed well, cable and wire business was impacted as government and private capex in infrastructure, construction and real estate sectors, among others, came down during the period, hence pulling down the demand.

“For manufacturers, it was a significant impact since this period is generally a prime sales period, particularly for the wires and cables segments. As soon as the pandemic hit, we activated a business continuity plan that placed employee safety and well-being as our prime consideration. The situation did not deter us from lending a helping hand to our dealers, distributors, and retail partners and gradually things started gaining traction. The dealers in metros faced greater challenges due to continued restriction in physical movement,” says Inder.

To ramp up the demand post the lockdown, Polycab grew its market reach in Tier-II and Tier-III cities, and continued with their branding initiatives during the year to improve brand connect. It’s evident from the doubling of the wires and cables business—from Rs 793.50 crore in the first quarter of FY21 to Rs 1,586.20 crore in the June-ended quarter this fiscal—as well as well the distribution and B2C verticals. In the second quarter too, the wires and cables business grew by 46 percent on a YoY basis to Rs 2,548 crore from Rs 1,740.8 crore in Q2FY21.

Polycab has now embarked on a multiyear transformational journey with an aim to cross Rs 20,000 crore in sales by FY26. To know more about how they plan to do it, and the role of next gen in the company, subscribe here to get an early access to our cover story.