Oberoi Group: When the staff checks in

The Oberoi Group challenges competition with employment policies that empower staff at all levels, and focus on learning and development 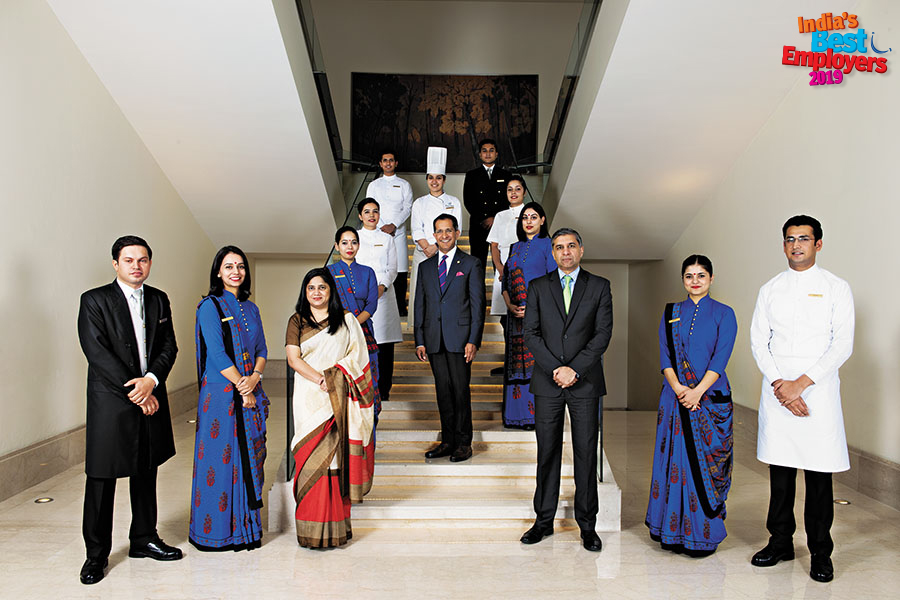 Vikram Oberoi (standing, centre, on stairs), CEO and MD of The Oberoi Group, says they are focussed on creating a sense of pride in their colleagues
Image: Amit Verma

I recall staying the weekend in 2016 at the Mumbai-based Trident hotel, run by The Oberoi Group, and returning from a meal to a surprise: My Kindle and my husband’s laptop were neatly stowed on a shelf, accompanied by a hand-written note addressed to us both—with a thoughtfully placed ‘screen cleaner’ kit. The note, signed by Gracy Roselie of the Oberoi staff, said she noticed the devices we used while cleaning the room, and had ‘taken the liberty to place a screen cleaner for the same’. The gesture, quite unexpected and rather utilitarian, stayed with me.

Roselie’s kindness was not uniquely directed to us, I later learnt. A Harvard Business School (HBS) case study on The Oberoi Group in 2015 details how, when a former Taj hotels loyalist checked into an Oberoi property, she asked for sparkling wine along with her welcome drink. This request was put through various levels of approval, and eventually took so long to translate that by the time the top brass had given a go-ahead, the lady was no longer in the mood for her glass of bubbly.

In response to this lost opportunity, the group instituted the ‘eMpower’ programme which empowers staff of all levels to create such ‘moments of delight’ for guests worth `1,500 per day. The discretion of how to use that budget is up to them. So while one Oberoi Vanyavilas guest, who collected fridge magnets and didn’t find one at the hotel gift shop, received a surprise Ranthambore magnet in the mail, another received a handwritten note from the housekeeper who left them a personalised pouch to easily carry around their ‘collection of chargers’.

“Sometimes, it’s about the small things,” says Vikram Oberoi, CEO and MD, The Oberoi Group. “We are focussed on creating a sense of pride in our colleagues. This dictates the way they internalise our values, how they support each other, and of course, how they focus on our guests. We don’t want them to think that this is just a place they work at. This is their hotel, these are their own guests. We want people to really enjoy working here—and that comes from instilling in them a sense of ownership.”

In the competitive hospitality space, the 85-year-old Oberoi Group faces challengers not just from the Taj, Marriott and other hotel group chains, but also from new-age players such as Airbnb. In a service industry, having a motivated staff is vital, as this translates directly to the customer experience. The Oberoi Group believes that its strengths in this regard are on two counts: Its stringent hiring process, and its learning and development programmes. 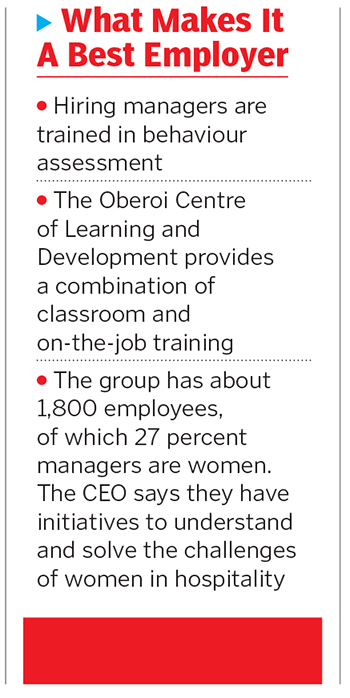 When a new hotel opens, the talent pool is not limited to its region, to encourage diversity. However, the company has only 27 percent women managers, a cause it says it is working towards. Every hire the company makes, says Oberoi, is assessed on whether the candidate has the potential to grow at least two levels. The group also uses a hiring assessment tool that throws situational questions at the candidate, to evaluate whether he or she would fit in with the company’s culture.

“The tool is customised and allows us to gauge their ability to show care and concern towards guests and fellow colleagues,” says Shailja Singh, the company’s senior vice president—human resources (HR). “What works in our favour to attract the best talent is that when a position opens up, our first option will always be to promote internally. Only in extreme circumstances do we hunt for talent outside, so we’re committed to the professional growth of each employee.”

The Oberoi Group has a robust development programme for employees, of which Delhi-based The Oberoi Centre of Learning and Development (OCLD) forms the backbone. Noted as one of the best hospitality institutes in Asia in the HBS case study, OCLD attracts talent from across the country, and a large part of the Oberoi’s management is made up of its graduates. OCLD also facilitates further education for managers, including travelling overseas for best practice trips.

“A lot of attention is paid to training, which makes The Oberoi Group a great employer. The programmes at OCLD have helped shape the hospitality industry,” says Kapil Chopra, founder of The Postcard Hotel and former president of The Oberoi Group, who is also an OCLD graduate. “Hiring is not something that is delegated. In fact, PRS Oberoi [Vikram’s father], now 90, still sits in on the OCLD interviews. When the top leadership pays such high focus to hiring, the company’s DNA changes.”

Nirbhik Goel, executive vice president—HR, says the OCLD is responsible for grooming the group’s talent pool. “As someone who has recently returned to the group, one of its biggest strengths is its ability to attract talent back because of its best practices,” he adds.

What defines an Oberoi Group employee? “It’s simple: Nice people,” says Vikram. “People who have solid values and don’t compromise. An example would be the daughter or son I would like to have and be proud of.”