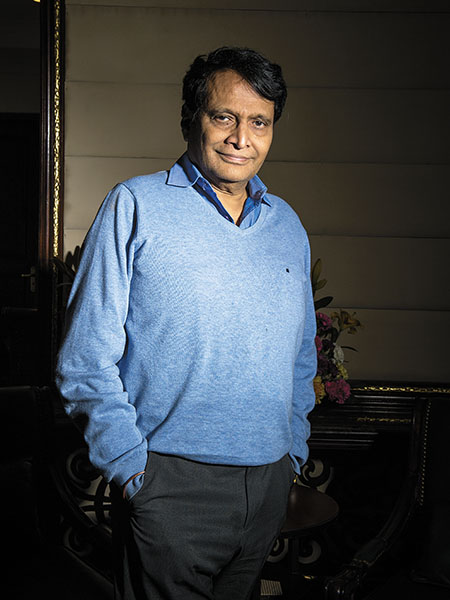 Suresh Prabhu says efficient operations and financial resources are the responsibility of airlines
Image: Amit Verma
India’s aviation industry has been in the midst of a turbulent ride for a while now. Plagued by mounting debt, losses and high fuel costs, airlines are struggling to stay afloat even as many more Indians take to the skies. This year, India’s airlines are expected to post combined losses of up to $1.9 billion, according to consulting firm Capa India. The government isn’t immune to the industry problems, but Prime Minister Narendra Modi’s plan to sell loss-making national carrier Air India (AI) to private companies was met with a tepid response. Suresh Prabhu, minister for civil aviation, speaks to Forbes India about the failed sale, the success of the Regional Connectivity Scheme and the way forward for the Indian aviation sector. Edited excerpts:

Q. Your ministry unsuccessfully attempted the strategic sale of AI last May. Did you identify the reasons for that and how do you plan to revive its fortunes?
The government remains committed to the disinvestment of AI. In this regard, the Air India Specific Alternative Mechanism (AISAM) has inter alia decided that in view of volatile crude prices and adverse fluctuations in exchange rates, the present environment is not conducive to stimulate interest among investors for the strategic disinvestment of AI. The issue would be revisited once global economic indicators, including oil prices and forex conditions, stabilise. AISAM has directed to separately decide the contours of the mode of disposal of AI’s subsidiaries: Air India Engineering Services Limited, Air India Air Transport Services Limited (AIATSL) and Airline Allied Services Limited. It has approved the contours for the sale of subsidiaries and asked to expedite the sale of AIATSL. The government has also prepared a comprehensive financial package by transferring non-core debt and assets to a special purpose vehicle.

Q. While India’s aviation sector has been growing, there have been concerns about the profitability of some companies. Is the ministry doing something about offering a wider range of financial instruments for the industry?
Each airline prepares its business plan on the basis of its own market assessment and liabilities. Efficient operations and financial resources are the responsibility of the airlines. However, the government has taken several measures to revive the airline industry and ensure long-term viability of the sector. The industry is dynamic and requires continuous adjustment according to global and domestic needs. The government has been constantly responding to industry conditions and undertaking specific measures to facilitate and enable growth. Steps also include reduction of central excise duty on aviation turbine fuel from 14 percent to 11 percent from October 11, 2018, and rationalisation of GST provisions, with a view to revive the airline industry.

Q. Recent reports suggest that eight airlines which saw massive opportunities with the Udan (Ude Desh Ka Aam Nagrik) scheme have shut down operations due to financial and operational challenges. Is the government doing anything on this front?
Operations of two selected operators, Air Odisha and Air Deccan, were closed in Odisha, Chhattisgarh, Northeast, Gujarat and Maharashtra networks. After issuing show cause notices to these agencies, six networks have been cancelled (out of nine awarded to them). These cancelled airports have been opened for bidding in Udan-3 for which bid evaluation process is in progress

Q. The International Civil Aviation Organisation (ICAO) recently raised some red flags against Indian airports’ security and inadequate infrastructure following an audit of Chennai airport. Ninety-four Airports Authority of India-operated airports have also reported losses. What is the ministry doing for a turnaround?
ICAO conducted a safety audit of India in November 2015 and November 2017 wherein the effective implementation was 57.44 percent. An audit by ICAO in November 2018 raised it to 73.6 percent.

An IASA (International Aviation Safety Assessment) audit by the Federal Aviation Administration (FAA) in July 2018 and final consultations in November last year confirmed that India meets relevant requirements for aviation safety oversight. FAA has appreciated the commitment of the government of India in ensuring effective safety oversight regarding India’s aviation system. With regard to safety, ICAO audit of India was conducted from March 7 to 15 last year. As per ICAO observations, a corrective action plan (CAP) was sent to them. The Aviation Security Audit Section has reviewed CAP and found it to be satisfactory.

There is also the Regional Connectivity Scheme—Udan to facilitate/stimulate regional air connectivity by making it affordable. The requirement for 5/20 has been modified and all airlines can commence international operations provided they deploy 20 aircraft or 20 percent of total capacity (in terms of the average number of seats on all departures put together) whichever is higher for domestic operations. We have also liberalised the domestic codeshare points in India within the framework of Air Service Agreements. Further, FDI limit for Scheduled Air Transport Service/Domestic Scheduled Passenger Airline has been raised from 49 percent to 100 percent, with FDI up to 49 percent permitted under automatic route and beyond that through government approval. For NRIs, 100 percent FDI will continue to be allowed under automatic route. However, foreign airlines would continue to be allowed to invest in the capital of Indian companies operating scheduled and non-scheduled air transport services up to the limit of 49 percent of their paid-up capital and subject to the laid down conditions in the policy. Increasing the FDI limit shall not only encourage lowering of prices but also accord choice to consumers.

Tweets by @forbes_india
People to watch out for: Forbes India 30 Under 30 Special Mentions
The trouble with early success