Educationist Vijay Dhar opens a three-screen, 520-seating capacity auditorium in the Valley in partnership with movie theatre chain Inox to provide Kashmiris with big-screen entertainment that they had missed out on for over three decades 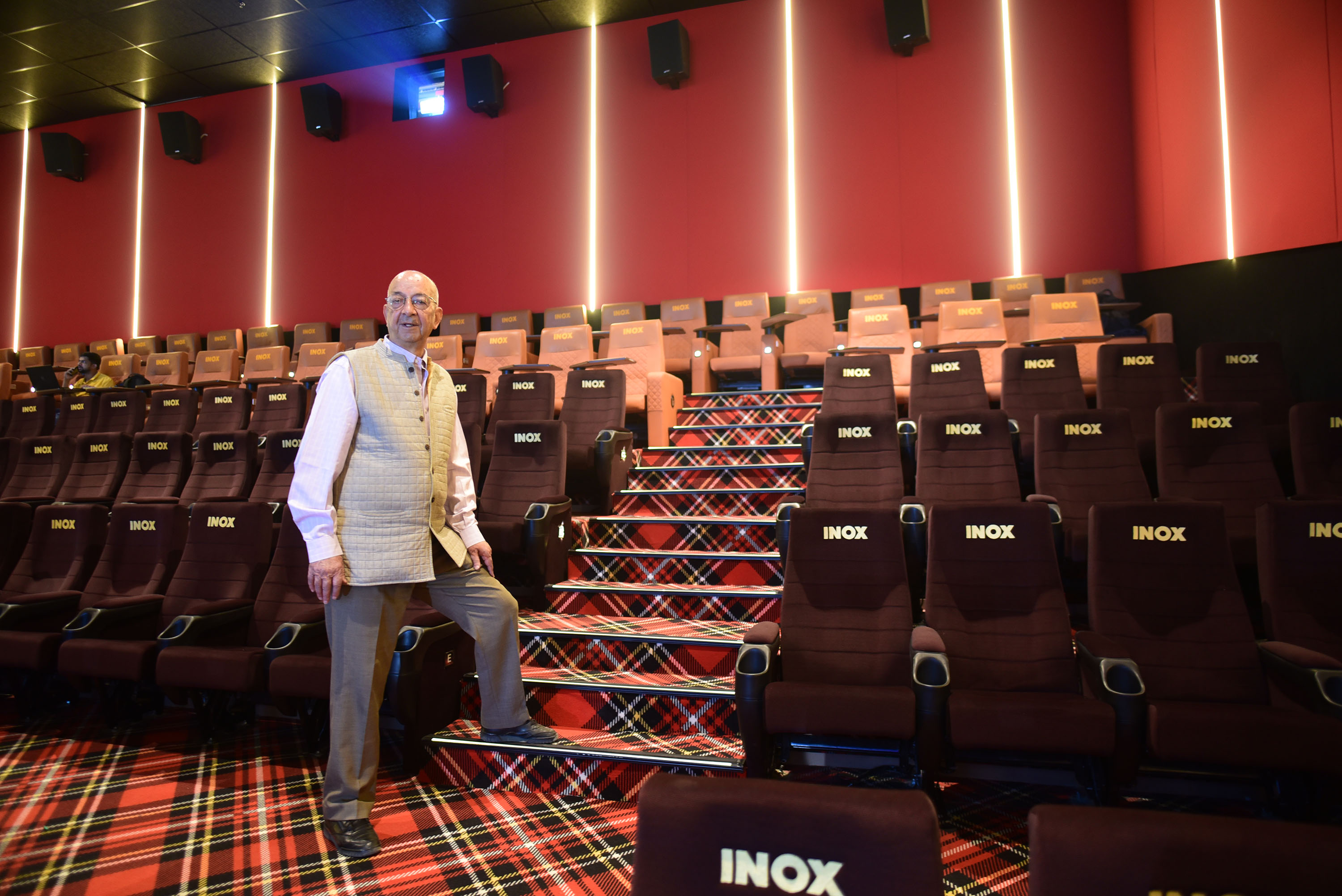 Educationist Vijay Dhar ahead of the inauguration of INOX multiplex comprising three cinema auditoriums with a capacity of 520 seats on September 19, 2022, in Srinagar, India. Image: Waseem Andrabi/Hindustan Times via Getty Images

Vijay Dhar would find every excuse to travel from Kashmir to Delhi on a Friday. He would lie to his family that he had a meeting and would return only on Mondays after watching the latest movie in a theatre in the national capital. It was a time in the early 90s when a militant group had ordered the shutdown of theatres in the Valley and the cinema-crazy Dhar found it impossible to stay away from the big-screen experience.
More than three decades after theatres were shuttered in the region that has constantly been under the shadow of terror, Dhar has taken the first step to revive the movie culture in the Valley. Along with Indian movie theatre chain Inox, he has opened the first multiplex in Srinagar after 32 years.

“Cinema has been in my blood. The film industry in Kashmir is probably the oldest in the country—it was in 1932 that the first cinema, Kashmir Talkies [later renamed Palladium], was set up in Srinagar. Bombay Talkies started in 1934. Apart from that, we used to run a cinema here called Broadway. It was quite popular, but had to be shut down,” says Dhar, who is chairman, and whose son Vikas is managing director. “We found that 60-70 percent of the old and new generation in the Valley have never seen a movie in a cinema hall here. We thought we must provide them with the same facility and the same entertainment that they would get in Delhi, Jammu or elsewhere in the country.”
Once sure of his intentions, Dhar rang up Inox’s chairman and MD Pavan Jain, who “just dropped the telephone”. “I thought he wasn’t interested,” recalls the 81-year-old Dhar, son of the late DP Dhar, a Kashmiri politician and Indian diplomat. However, the next day, he got a call from the CEO, saying they were on board.  Also read: Ukraine's reopening cinemas offer refuge from reality—and air raids
The multiplex, located at Sonwar—where Broadway stood—has three screens with a total seating capacity of 520 and the latest technology, including 3D-viewing experience, Dolby Atmos surround sound and the best projection equipment. Aamir Khan-starrer Laal Singh Chaddha was screened during its inauguration on September 20. It will open to the audience on September 30 with Vikram Vedha which has actors Saif Ali Khan and Hrithik Roshan in lead roles.
“Inox always looks at expansion opportunities. And there are some decisions that you take with a lot of intent and heart rather than anything else. This was one of them. We are present in 19 states, but we felt there’s nothing better than having a cinema hall that will assimilate the cultures… that will take storytelling of the Indian and world film industry to Kashmir. They haven’t seen a cinema hall for 32 years,” says Alok Tandon, chief executive officer, Inox Leisure Limited. Also read: PVR-INOX: How the big screen will get bigger, better
He describes the Inox family and the Dhars as ‘family friends’. “The Dhar family has done a lot for the revival of cinema in Kashmir. Vijay Dhar is a visionary… he took the responsibility of opening the first cinema in Kashmir,” adds Tandon.
Broadway opened in 1965. After that, there were close to a dozen cinema halls, including Regal Cinema and Neelam, in the city and areas such as Baramulla, Sopore and Anantnag. As a college student, Dhar recalls borrowing 25 and 50 paise from his friends to watch movies whose tickets cost Rs2. The amount came down to Rs1.5 following concessions. “Regal had a special box for the Maharajah. When we built Broadway, we also kept a special box so that we felt like Maharajahs,” reminisces Dhar.
Going back in time, Dhar says Broadway had an exclusive 7 pm show of Hollywood films that became a social event. “People would come well-dressed, meet each other, have a drink at the bar inside the theatre, eat dinner and go back,” he says. “We will try and revive those memories. With the new multiplex, the youth, and our tourists and guests will at least have somewhere to go to for entertainment.”Also read: Theatrical, not OTT, will be the backbone of our business: Apoorva Mehta
Previous attempts to reopen some theatres in Kashmir had come a cropper after terrorists carried out a grenade attack on Regal Cinema in Lal Chowk in 1999. Broadway had shut down in 1990. The family revived it in 1999, but it did not work.
Dhar left the Valley following the exodus of Kashmiri Pandits in 1990, but returned in 1992 after his mother, who had taken ill in Delhi, expressed her wish to go back home once she was fine. “We were cooped up in a military car. There were three vehicles in front and three behind. My mother’s name was changed and so was mine when we came back,” says Dhar, who went back after five weeks and returned for good only in 1998.
That was when he decided to build a school—Delhi Public School, Srinagar—which started in 2003. “We saw that education was kaput in the region. Some mad person must have bitten me, so I opened the school,” he continues. And he got complete support then as he got now—from the central government, state officers and the Lieutenant Governor Manoj Sinha—to open the multiplex after adhering to all rules and taking requisite permissions.
Tandon believes the multiplex will give plenty of job opportunities to the Kashmiri youth and help them develop certain skillsets that can guarantee employment in the future. “And people there will get to watch a movie on the day and date of release in other parts of the country,” he says.Also read: Talking movies: The Chinese cinema bringing film to blind audiences
Both Inox and Dhar are also promoting Kashmiri culture via the multiplex. “We have used local art called Khatamband on the ceiling and the doors by local artisans. The Inox logo is made of paper mache, again by a local artisan, for the first time. Our job is to take that art to other parts of the country,” explains Tandon.
Apart from the usual popcorn, nachos, sandwiches, samosas and coffee, the audience can also enjoy Kashmiri cuisine at the auditorium and Inox hopes to take that to its other multiplexes too.
Since there isn’t anything for children, Dhar is also building a gaming zone in the complex.
Tandon is optimistic of a fantastic response in Srinagar. “People are waiting to come to the cinemas. And we are waiting for more opportunities in other parts of the Valley,” he says.