Balenciaga is the first luxury fashion house to quit Twitter

Following in the footsteps of many celebrities, the brand is the latest to deactivate its account and suspend its advertising activity, giving up on nearly a million followers 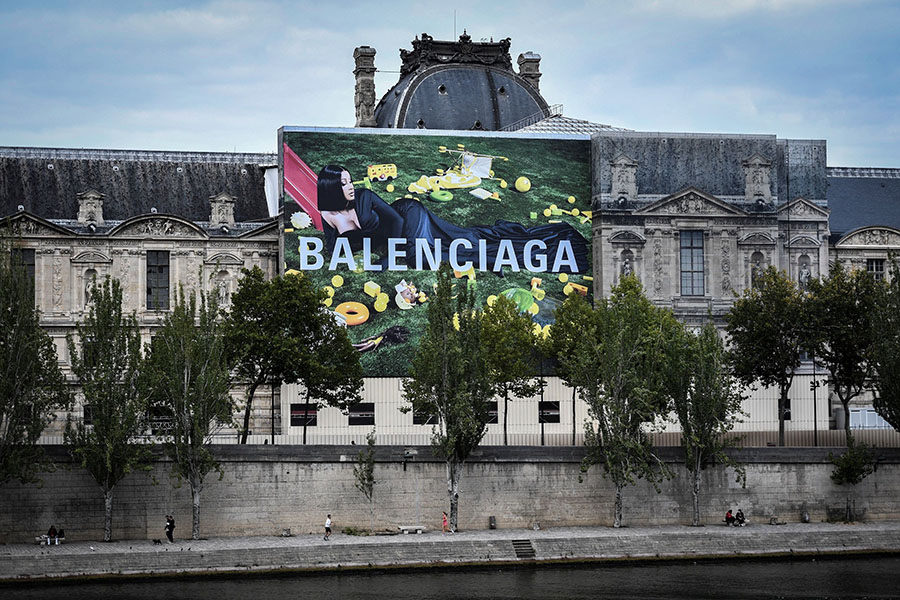 Balenciaga has left Twitter but is still present on other social networks—and on some of the most beautiful monuments in Paris. Image: StephaneDe Sakutin/ AFP

Users typing "Balenciaga" in the search bar of Twitter will no longer have access to the luxury fashion house's content on the social network, now owned by Elon Musk. Following in the footsteps of many celebrities, the brand is the latest to deactivate its account and suspend its advertising activity, giving up on nearly a million followers.

Whether with a handbag in the form of a potato chips packet, a bag-turned-speaker, busted up sneakers with an exorbitant price tag, or a parka worthy of the finest highway maintenance teams, many of Balenciaga's creations have created a buzz—and much discussion—on Twitter. Criticism or praise, it doesn't matter, the luxury brand has never stopped getting people talking, and that's still the case today, albeit for a completely different reason.

Without a word of explanation, Balenciaga has broken its ties with Twitter, deactivating its account. The luxury brand confirmed this information to the media sites Vogue and The Business of Fashion, without giving any particular reason for the move. However, this departure comes just weeks after Elon Musk bought the social network for the sum of $44 billion. Mass layoffs, paid-for certification, and a more relaxed approach to content moderation are all factors that could have played a role in convincing the luxury house to leave the social network.

Balenciaga is the first luxury brand of this caliber to quit Twitter, but it may not be the last. The fear of seeing its ads associated with hateful, banned content, or misinformation, could put off many others in the near future. This unexpected departure raises the question of "who's next?"—a question that comes up time and again in the posts commenting on the deactivation of Balenciaga's account.

It may be the first fashion brand of this magnitude to give up the social network, but Balenciaga follows a movement initiated by a host of celebrities. In the weeks following the Twitter sale, world-famous stars such as Shonda Rhimes, Whoopi Goldberg, David Simon, and model Gigi Hadid have all decamped. Unequivocally, their motivations are all linked to one and the same person, Elon Musk, and what he intends to do with the social network.

"Not hanging around for whatever Elon has planned. Bye," simply posted Shonda Rhimes to explain her departure. "Leaving this up for a week as a pinned tweet before locking the account. It’s been a lovely little war, folks, and some good fun was had, But until this platform gets better and more honorable management, fuck it, no," explained the American journalist and screenwriter, David Simon, creator of the cult show, "The Wire."

Also read: Why did Twitter fall victim to a hate raid after Elon Musk's arrival?

More recently, Gigi Hadid has taken the same decision: "I deactivated my Twitter account today. For a long time, but especially with its new leadership, it’s becoming more and more of a cesspool of hate and bigotry, and it's not a place I want to be a part of," she wrote, apologizing to her fans while reminding them that the social network is not "a safe place." Meanwhile, major companies, such as General Motors and United Airlines, have announced that they are temporarily suspending their ads on the social network.

Present—but not very active—on Instagram, where it is nevertheless followed by more than 14 million users, as well as on TikTok, with no less than 3 million followers, the house of Balenciaga remains accessible on other social networks. It remains to be seen whether it will soon open an account on Mastodon, which is now being billed as the alternative to Twitter.

Tweets by @forbesindia
The power of networking in the new economy
How the rise of knitting is fighting stress, as well as fast fashion