How the rise of knitting is fighting stress, as well as fast fashion

Knitting is now gaining popularity among men, as well as younger generations, to the point of becoming a star activity on social networks 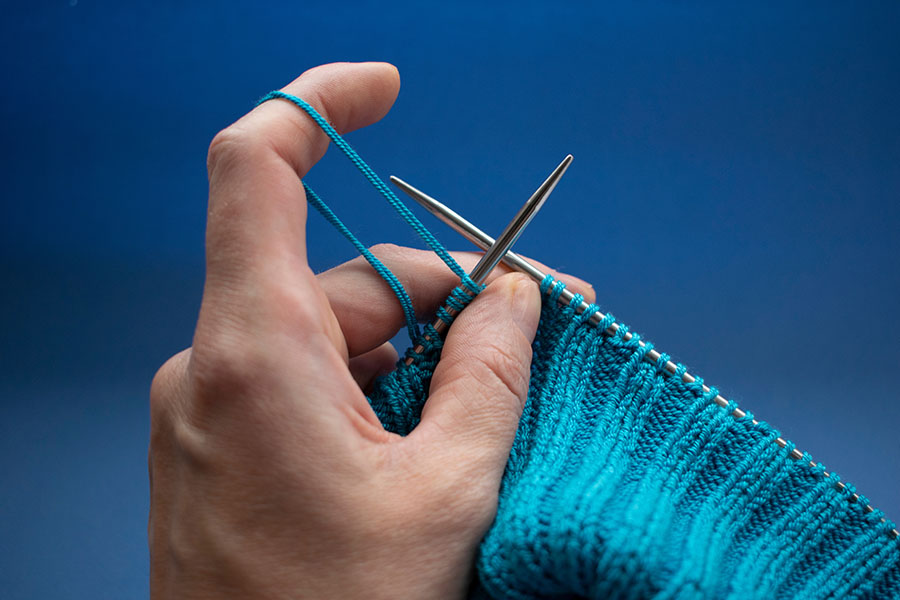 Knitting is popular with more and more French people, including men and younger generations. Image: Shutterstock

Knit one, purl one, and repeat... A favorite activity of many a granny just a few years ago, knitting is now gaining popularity among men, as well as younger generations, to the point of becoming a star activity on social networks. This is due to its stress-busting virtues, as well as a growing craze for all things DIY and slow fashion.

Knitting is not—or no longer—just for seniors! The image of this centuries-old technique has been revamped in recent years, gaining popularity among younger generations, but not only... A study conducted by Opinion Way for PP Yarns & Co* among French adults, released in September, proves that knitting is now trendy—and among new audiences—including men and Generations Y and Z. In fact, more than a third of under 35s (34%) claim to practice knitting today, as do 32% of men. These figures reflect the growing popularity of this hobby since the beginning of the pandemic.

The proof is that knitting is becoming a strong trend on social networks, starting with TikTok, a social media popular with younger users. The hashtag #knitting has notched up no less than 1.8 billion views on the Chinese social network, and that's without counting its dozens of variations, most of which have several million views. There are videos of users simply filming themselves knitting, as well as challenges, clothes and objects knitted by hand, and even more tips and tutorials. All of these videos reflect young people's enthusiasm to engage in manual activities with, they say, objectives that are many and varied.

While it's easy to understand why the average person might have taken up knitting during the pandemic —and its various lockdowns—it's less clear why the practice has endured beyond the health crisis. According to the PP Yarns & Co survey, knitting is a source of well-being, relaxation, and even disconnection—a way of switching off. More than three quarters of respondents (76%) say it is a relaxing activity, while nearly two thirds (63%) go so far as to state that it has a positive impact on their health. Given the rise in anxiety disorders among the younger generations, this knitting revival appears to be timely.

But knitting is also a response to certain environmental issues, especially in the field of fashion. For more than three quarters of French people polled (77%), knitting is beneficial for the environment. This is a reason that pushes young people in particular to take up knitting, since 36% of the respondents under 35 years old consider that "the environmental appeal" of knitting is particularly important. A handful of respondents go even further by affirming that knitting limits "the production and purchase of new clothes, making it possible to return to a shorter circuit and to limit over-consumption behaviors" (22%).

If learning to knit used to be passed down from one generation to the next, it is now very easy to learn the technique, with dedicated accounts multiplying at high speed on social networks. One of the best-known is the brand We Are Knitters, which has more than 700,000 followers on Instagram. It offers wool, kits and patterns, but also tips and tricks for learning the basics of knitting. All of this is accompanied by the creations of enthusiasts, amateurs and beginners in knitting.

But social networks have also seen the emergence of a host of influencers, collectives, and other knitting brands in recent years, all on a mission to share their know-how—and their passion—with as many people as possible. This is the case of Alice Hammer, Wool And The Gang, In The Wool For Love, Trendy Tricot, or Mademoiselle Quincampoix, among others, all of whom have tens of thousands of followers. At a time when the habits and practices of yesteryear are coming back in force, knitting could be set to become one of the most popular pastimes of the moment.

*OpinionWay survey for PP Yarns&Co conducted between 27 and 28 July 2022 on a sample of 1,063 people representative of the French population aged 18 and over.