Why banks are in a sweet spot after almost a decade

Most of India's top private and public sector banks are seeing robust lending growth to retail and housing post the pandemic, leading to revised earnings growth. But a deposit rate push, weak microfinance trends and corporate borrowing patterns need to be monitored carefully 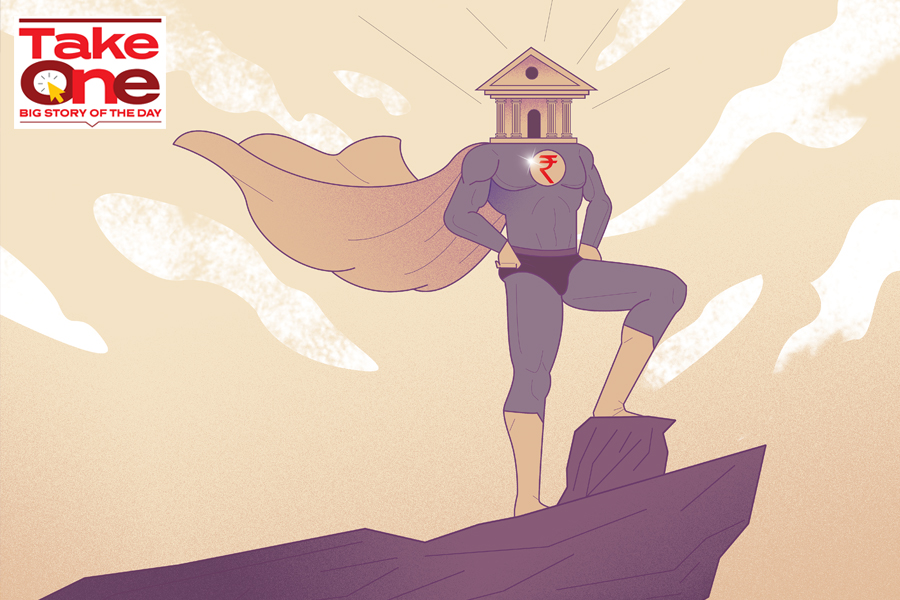 For the first time in almost a decade, India’s banks are in a sweet spot—the balance sheets of several public sector banks and private sector banks have seen a remission of bad loans, led by higher provisions, which were possible due to government-induced recapitalisation. Private sector banks have also seen improved asset quality due to better provision, slippages being brought under control and increased deleveraging by corporates. This has also meant benign credit costs for banks in recent months.

The three months to September saw a strong growth momentum led by a combination of growth in lending to retail, small businesses and working capital loans for corporates. Disbursements have been strong across both secured and unsecured segments—vehicle, home and personal loans. This comes even as interest rates on loans continue to rise.

In a still-rising-interest-rate environment, bankers and analysts see retail loans growth likely to continue for at least two more quarters for all banks. “Retail advances are in focus… they now account for just above 30 percent of all credit, up from 25 percent in FY18. There will be no letup, at least for the next two quarters,” says Nitin Aggarwal, banking analyst at Motilal Oswal Securities. Housing demand is getting supported by vehicles and demand for unsecured loans is also coming back, he adds.

There could, however, be some uncertain times ahead for the microfinance space, which could hurt an already-ailing Bandhan Bank.

Top bankers echo the bullishness of analysts for retail loan growth. Axis Bank’s Sumit Bali, group executive and head of retail lending and payments, says: “We have seen strong retail loan growth and expect this trend to sustain for the bank and the industry. It is indicative of the improved demand for consumption across most of our retail book.” Axis Bank’s retail book grew 22 percent year-on-year and 3 percent quarter-on-quarter. “Credit card spends have been good across all categories (47 percent growth year-on-year) which imply good consumer sentiment,” explains Bali.

Kotak Mahindra Bank’s group president and head of consumer banking Virat Diwanji is also confident that secured loans growth would sustain. “The psyche of people post Covid-19 is that roti, kapda hai…. makaan karna hi hai (food and clothing aside, a home is a must),” Diwanji tells Forbes India. Individuals have also been using current properties to borrow in the form of loan against property (LAP), he adds. Home loans and LAP grew 40 percent year-on-year in Q2FY23.

In the secured lending space, as interest rates continue to rise and loans gets costlier, the eligibility of the salaried and the ability to borrow might become a constraint. But this is not clearly visible at this stage,” says Diwanji.

By next March if the repo rate climbs to 6.5 percent (from 5.9 percent currently), home loan rates could well climb to above 9 percent, which might push potential customers to delay their decisions for a property. Diwanji also believes that in the secured business loans category, investments in the micro, small and medium enterprises (MSME) segment are sustaining and “unlikely to taper off”.

The overall non-performing assets (NPAs) for banks in India are down to a seven-year low of 5.9 percent in FY22, according to the Reserve Bank of India (RBI). This is likely to improve further to 5 percent by FY23-end and around 4 percent by FY24, according to Crisil estimates.

The reduced pressure on banks’ top management to deal with bad loans and focus on lending has clearly reflected in the Q2FY23 earnings. In the Motilal Oswal Financial Services (MOFSL) portfolio, the public sector and private sector banks have seen a Q2FY23 earnings upgrade of 12.3 percent and 2.7 percent respectively. Improved profitability and return on asset growth has started to get reflected in the stock prices of the top banks (see Nifty Bank chart). 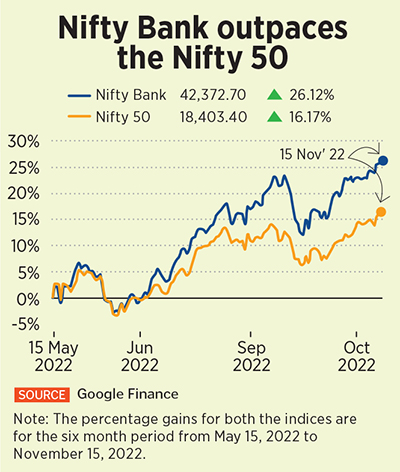 Nomura’s analysts Nilanjan Karfa and Punit Bahlani expect bank earnings growth trajectory to look better through FY23-24, with declining credit costs and loan growth holding up. This has been due to higher credit growth, which has seen banks’ earnings improving. Rising interest rates—190 bps since April –have helped banks increase profitability. “Lending rates on new loans have increased by 26 bps month-on-month (+ 96 bps since March), while new loan spreads are up by 5 bps month-on-month (down 6 bp since March),” the Nomura analysts say.

Net interest margins—the difference between the interest income generated by a bank on loans and the amount of interest given to lenders—have also been positive in the September-ended quarter, over the previous successive quarter. The net interest margin for Axis Bank rose by 36 bps, SBI 32 bps, ICICI Bank 30 bps, Kotak Mahindra Bank 25 bps and HDFC Bank 10 bps.

Besides margin growth and profitability increase, improved capital adequacy has also become a positive for private and public sector banks. “All the PSU banks have a cushion of over 100 bps over the regulatory requirement Tier 1 capital requirement of 7.6 percent. Five years back, only one-fourth or one-fifth of the PSU banks had that cushion,” says Krishnan Sitaraman, senior director and deputy chief ratings officer, Crisil Ratings. Nearly 80 percent of private sector banks have a capital adequacy cushion of 300 bps over the Tier 1 capital requirement.

Also read: Post-mergers, big banks aren't gobbling up smaller ones. Not yet

Ashok Kothari, a self-employed interior designer, with monthly earnings deployed towards equities and Post Office Savings schemes, has decided to shift these to a fixed deposit with the public sector Central Bank of India. The bank—like most other banks in the country—has from November 11 hiked interest rates it offers for individuals (retail) by 60 bps to 6.15 percent for a year to less-than-two years. The Post Office scheme offered Kothari an annual interest rate of 5.5 percent.

Keen to channelise earnings into a safer financial instrument in a volatile financial market environment, Kothari says: “I decided to put my income back into a fixed deposit because of the current volatile stock market conditions and the need to provide safety to manage my monthly maintenance outgo of Rs7,000 per month for my Goregaon flat.” 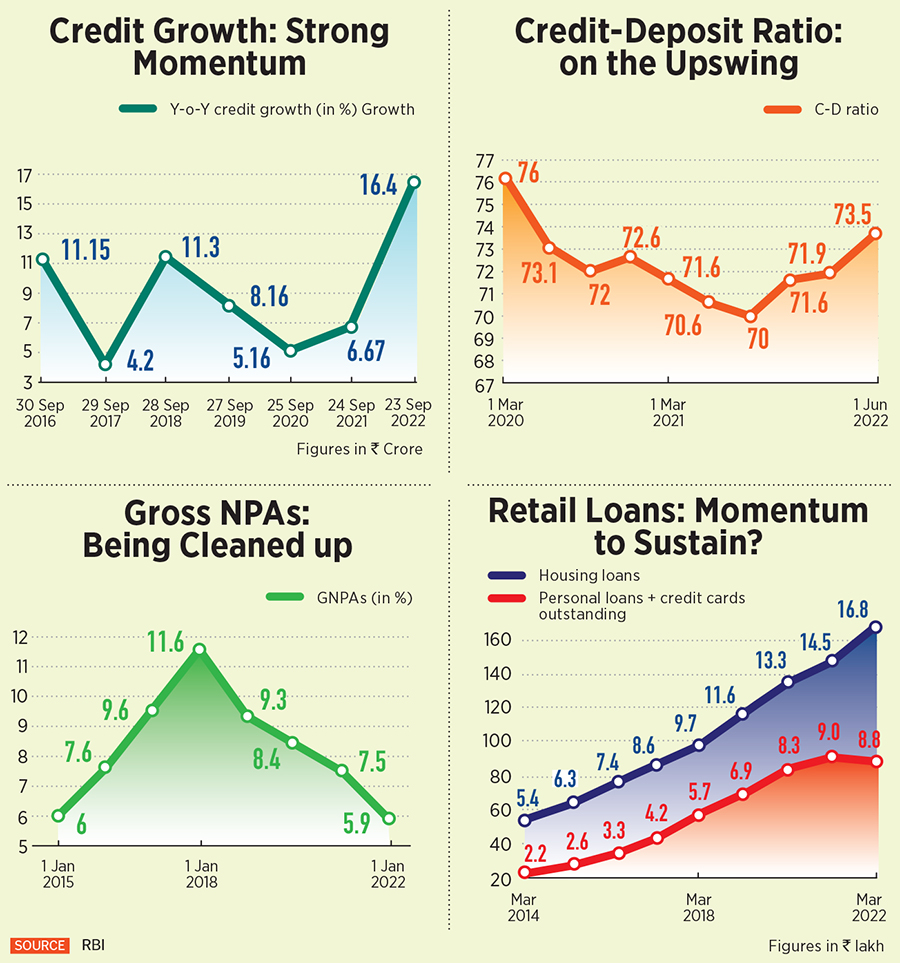 Investors have found better returns and safety in bonds, with India’s benchmark 10-year G-Sec bond yield at 7.38 percent on November 15 being higher than most banks’ fixed deposit rates. Banks are starting to offer high deposit rates, but they have edged up slower than lending rates. “So far in the last few quarters, banks have been managing [this scenario] because for a substantial period of time, deposit growth rates were higher than credit growth,” says Crisil’s Sitaraman.

Axis Bank’s Bali is confident of “deposit growth picking up in second half of FY23”. Kotak’s Diwanji agrees: “Banks will chase the liability. If the repo rate moves towards 6.5 levels, deposit rates will rise,” he says and believes the RBI could pause on rates for one or two quarters after that and the decline in interest rates is expected to be seen after June 2023.

But future deposits’ action from banks will also depend on the intensity of RBI rate hikes and the commentary from the central bank. Motilal Oswal Securities’ Aggarwal believes the current rate hike cycle is unlikely to be an extended one and there could be a pause on rate action after the January 2023 policy meeting till mid-next year. “If inflation expectations are getting anchored then from a depositor’s mindset, banks may not need to pay them excessively to compensate for inflation. The commentary from the RBI governor will also be important,” Aggarwal says.

RBI Governor Shaktikanta Das has been in the spotlight for being unable to keep inflation below the bank’s upper tolerance level of 6 percent. India’s consumer price index, which measures retail inflation, eased to a three-month low of 6.77 percent for October, according to official data. The US Federal Reserve’s commentary on future rate action has suggested that they too might move to a slower rate of increases.

Also read: Digital Currencies: Why The RBI Needs To Bite The Bullet

In India, the unsecured lending space could face some stress in the coming months as rates are expected to rise further. But demand for consumption of goods and services is not likely to drop. Most banks appear to have learnt from the mistakes of the past—of aggressive lending, not accounting appropriately for riskier assets and the need to improve underwriting and risk management tools.

The developments relating to two ongoing mergers will also be watched closely: The HDFC Bank merger with HDFC; and the merger of parent IDFC with IDFC First Bank. Valuations for both these banks will alter when the mergers are completed.

There are other issues that need to be monitored too. Corporate borrowing action, particularly in the form of debt, will also need to be monitored as the scope for the revival of a private capex cycle rises. “If a debt-funded capex cycle starts, then that needs to be monitored,” says Crisil’s Sitaraman. In the last seven years, median gearing of Crisil Ratings portfolio of companies has come down to 0.5 percent from an earlier level of 1.1 percent. Gearing is the ratio which measures how much a company’s operations are funded using debt compared to equity.

Tweets by @forbesindia
How the rise of knitting is fighting stress, as well as fast fashion
Photo of the day: Football fever