Everyone had come to Tolkien in some kind of time of crisis: JD Payne on creating 'The Rings of Power'

JD Payne, one-half of the Lord of the Rings: The Rings of Power showrunner duo, on working on Tolkien's work, the $1 billion price tag and bringing in new folks while submitting their creation to the loyals 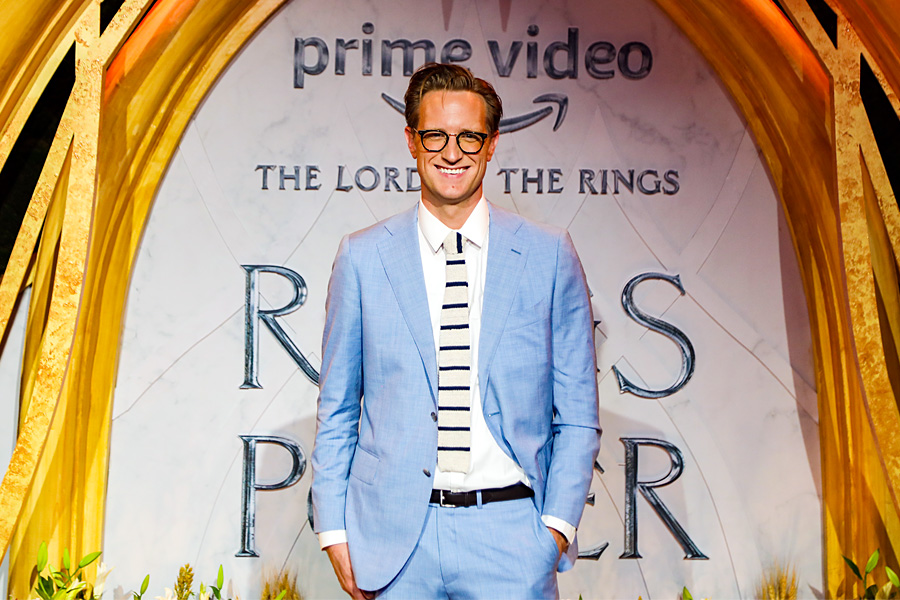 At the helm are showrunners JD Payne and Patrick McKay, known to the Trekkies (Star Trek fans) as the screenwriting duo that punched up the scripts of JJ Abram's Star Trek movie trilogy. This street credit comes in handy for the duo as they recreate Middle Earth for a new generation, for those who jumped on the Lord of the Rings bandwagon after watching extended versions of Peter Jackson's movie trilogy, and also for the purists who love to analyse every single detail of Tolkien’s text (novels, appendices, letters to editors, family, and fans). Pleasing a fandom is not easy. Especially when you are working with the characters of the fourth best-selling book of all time—behind only the Bible, Mao’s Little Red Book, and the Koran—and your creation comes with a $1 billion price tag for five seasons.

For JD Payne, one half of the The Rings of Power showrunner duo, it was never about the price tag. The pressure was about staying true to Tolkien's themes of hope, friendship, and finding light in the darkness. In a conversation with Forbes India, Payne sheds light on creating a condensed version of material that was vast, on the comparison with Peter Jackson's films, and the difficult task of bringing in new folks to Tolkien's work while submitting their creation to the loyals. 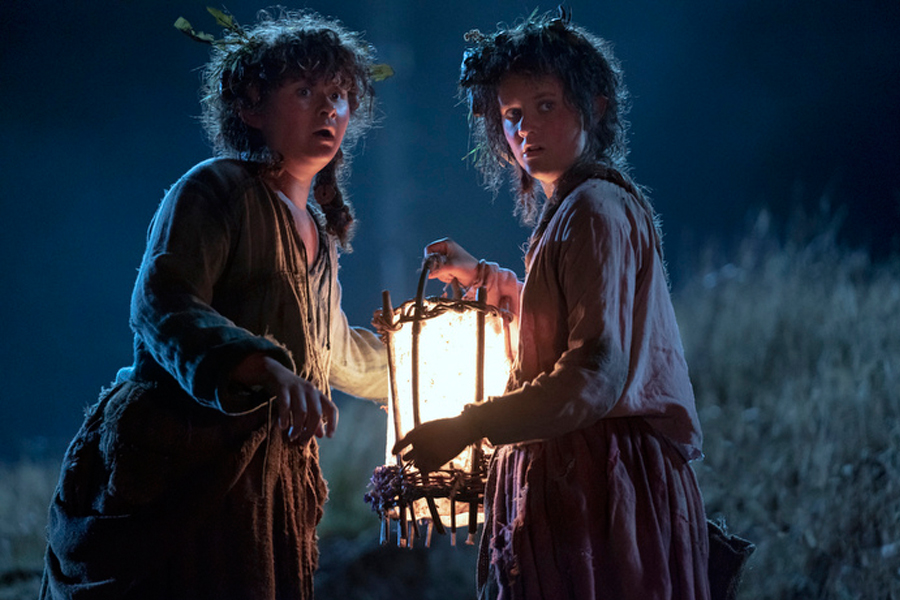 Q. How did you ensure you stayed true to Tolkien’s vision?
First, we work with a series of Tolkien experts that are integral to our process. Like Tom Shippey [one of the world’s leading academic experts on the works of Tolkien] was someone who we worked with early on. We worked with Carl F Hofstetter [head of not-for-profit Elvish Linguistic Fellowship] for languages. And then we have a Tolkien expert superfan who’s in our writers’ room, who makes sure that as we’re brainstorming all kinds of different story ideas, we’re never going too far from the source.

Our vision was to try to stay true to Tolkien's vision. Because this is a story that's never been told before. It's the other story of the forging of the Rings of Power, the rise of the Dark Lord Sauron, the fall of Númenor, and the last lines of elves and men. And within that, I think there were themes that we were excited to explore. These classic Tolkien themes of light versus dark, of underdogs that have been tasked with these crazy, difficult missions, and friendship. Those are stories that are timeless, and they’re close to our hearts. And being able to explore them on such a huge canvas was the opportunity of a lifetime.

Q. You've talked about Harfoots, elves, dwarves, and humans in this story. They all have different life spans in Tolkien’s world. So did you choose a non-linear path to tell all those stories or did you manage to condense all of them?
We did some condensing. And that was one of the first big agreements we made working hand in hand with the Tolkien estate. Simon Tolkien, who is JRR Tolkien's grandson, worked with us as we were putting together our first season and will continue to do so as we put together every season. One of the first big agreements we made with the estate was that we would be compressing some of the timelines because otherwise, you’d have humans that were dying off every couple of seasons, and you wouldn’t able to invest in people over a long-form story. So once we decided we would compress that we took a couple of the big events of the Second Age and brought them all into one story. 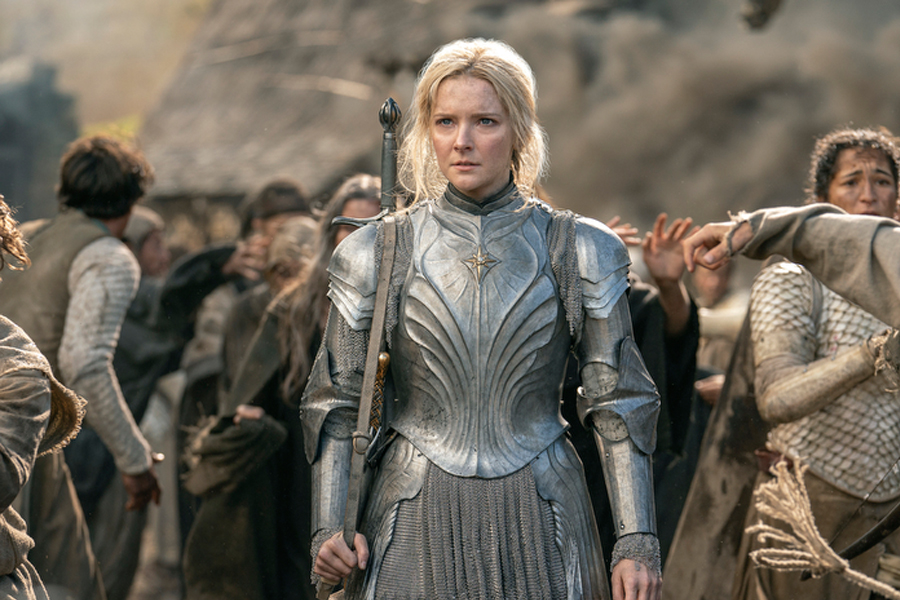 Morfydd Clark as Galadriel in 'Lord of the Rings: The Rings of Power' Image: Matt Grace/Prime Video
Q. You watched Peter Jackson’s movies when you were in your twenties. Do you still feel like you’re under the shadow of what he has created with the LOTR and Hobbit trilogies?
We feel grateful for what he’s created. He got so much so right and caught that feeling of Middle Earth. And I think won a lot of fans--there are a million people who hadn’t necessarily known it before. We hope to build on that legacy, and also the legacy of all the artistes who have ever worked on Middle Earth. It’s a long illustrious group—from the Ralph Bakshi movies to Led Zeppelin songs to John Howell and Alan Lee’s artwork. We are one among many artistes who have worked in Middle Earth, and there have been people here before us, and there will certainly be people afterwards.

Q. Some people are going to come into the Tolkien fold after watching your show. What is the catch for them? Why should they come and see what you’ve created?
It’s because these stories hit people in a place that very few other works do. They get beyond a lot of our modern cynicism, and are able to speak to our hearts and directly to our spirits. And they’re very nourishing. And I spoke of some of those themes that are so important to us. Those are timeless themes. Tolkien didn’t want to write an allegory for anything, he wanted to write something that he felt would be applicable. And I think that’s why it was interesting in our writers’ room when we first started sitting down and saying, ‘How are we going to adapt these amazing works?’ We sort of asked each of our writers, ‘how did you find Tolkien? What was your first exposure?’ For one person, it was like, ‘my parents were going through a really bad divorce’. Someone else who was like, 'my dad had just gotten cancer’, and for someone else ‘my mom had just lost her job’. Everyone had come to Tolkien in some kind of time of crisis. I don’t think that’s an accident. Because Tolkien wrote these stories, and they were really born in some of the darkest times of human history—in the trenches of World War One when the earliest parts of this legendary story started being developed. And because of that, when he writes about hope, it’s not the false hope that people feel doesn’t acknowledge the pain. It’s a hope that goes through the pain, and yet still sees room for that one ray of sunlight to pierce through the dark clouds. Suffering is a common thing for all human beings and all human beings can find that hope. That is uniquely portrayed in Middle Earth. 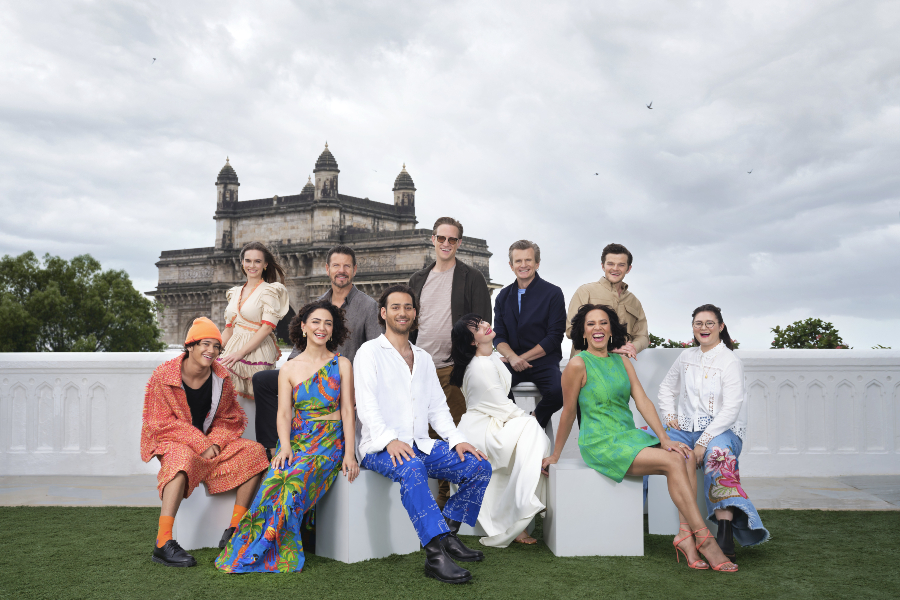 The team of The Lord of The Rings: The Rings of Power poses against the Gateway of India. (L-R back): Ema Horvath (Eärien), Lloyd Owen (Elendil), JD Payne (Showrunner/Executive Producer), Charles Edwards (Celebrimbor), Robert Aramayo (Elrond). (L-R front): Tyroe Muhafidin (Theo), Nazanin Boniadi (Bronwyn), Maxim Baldry (Isildur), Markella Kavenagh (Elanor ‘Nori’ Brandyfoot), Sara Zwangobani (Marigold Brandyfoot), Megan Richards (Poppy Proudfellow) Image: Amazon Studios
Q. The Rings of Power is going to air concurrently with the Game of Thrones prequel. Comparison is inevitable. Since they have done the fantasy genre for the small screen before, how do you think your story and Tolkien’s characters will compete with that?
For me, it’s not a competition. I don’t think for any of us (it is). We didn’t come at it with that spirit. We just want to honour the source material, Tolkien himself. We wish them well in their experience. I just love fantasy, so I’m glad that there's a lot of fantasy that’s out there.

Q. The Rings of Power has become a billion-dollar IP. And your fellowship is very brand new. Do you feel that pressure to deliver?
Oh, absolutely. But no pressure that comes from the outside could be greater than the pressure that we put on ourselves from the inside. Because this work, as you can tell, it means so much to us that we just want to get it right. And we’ve worked every day with every ounce of energy and intellect and heart that we have to be able to try to do it justice.

Tweets by @forbesindia
Our top reads of the week
Photo of the day: Burning away